Deadline News
Home News Scottish News Greyfriars Bobby being damaged by superstitious craze
Facebook
Twitter
Pinterest
WhatsApp
A CAMPAIGN has been set up to save Greyfriars Bobby after damage caused by superstitious Edinburgh tourists spread across his face and chest.
A modern “tradition” has sprung up that touching the nose of the legendary dog statue in Edinburgh brings good luck.
But the constant touching has got so bad that the underlying brass metal has been exposed on Bobby’s entire muzzle and even parts of his chest.
The local council gave up several years ago restoring the black colour of the statue because it cost £400 a time just to retouch his nose.
Greyfriars Bobby was installed in the late 19th Century to commemorate a Skye Terrier that kept watch over its owner’s grave for many years.
Now a concerned local, Evelyn Duncan, has decided enough is enough and has set up a Facebook page to try to stop the damage.
The page – called ‘Greyfriars Bobby – Save Bobby’s Nose’ – states: “Poor wee Bobby is getting his nose rubbed away. Do people think this is going to bring them luck? It’s not so lucky for Bobby as he soon won’t have a nose.”
She said today (Thu) :”I wanted to find out if anyone else felt the same about the damage to Bobby’s nose.
“Every time I pass the monument I have to fight the urge to get out of my car and tell people to stop rubbing his wee nose. It mystifies me that people think rubbing it is going to bring them luck.”
Evelyn said Bobby has been a well-loved part of Edinburgh since 1873 and is the city’s smallest listed building.
She added: “As far as I know it’s just recently that this has started to become a phenomenon.
“It’s ridiculous, unnecessary vandalism and will eventually spoil the pleasure of the monument for other people. Not to mention the indignity Bobby has to suffer for having a shiny brass nose.”
Reacting to the page, one supporter wrote: “We cannae have that. Just stop it. Get them telt.” 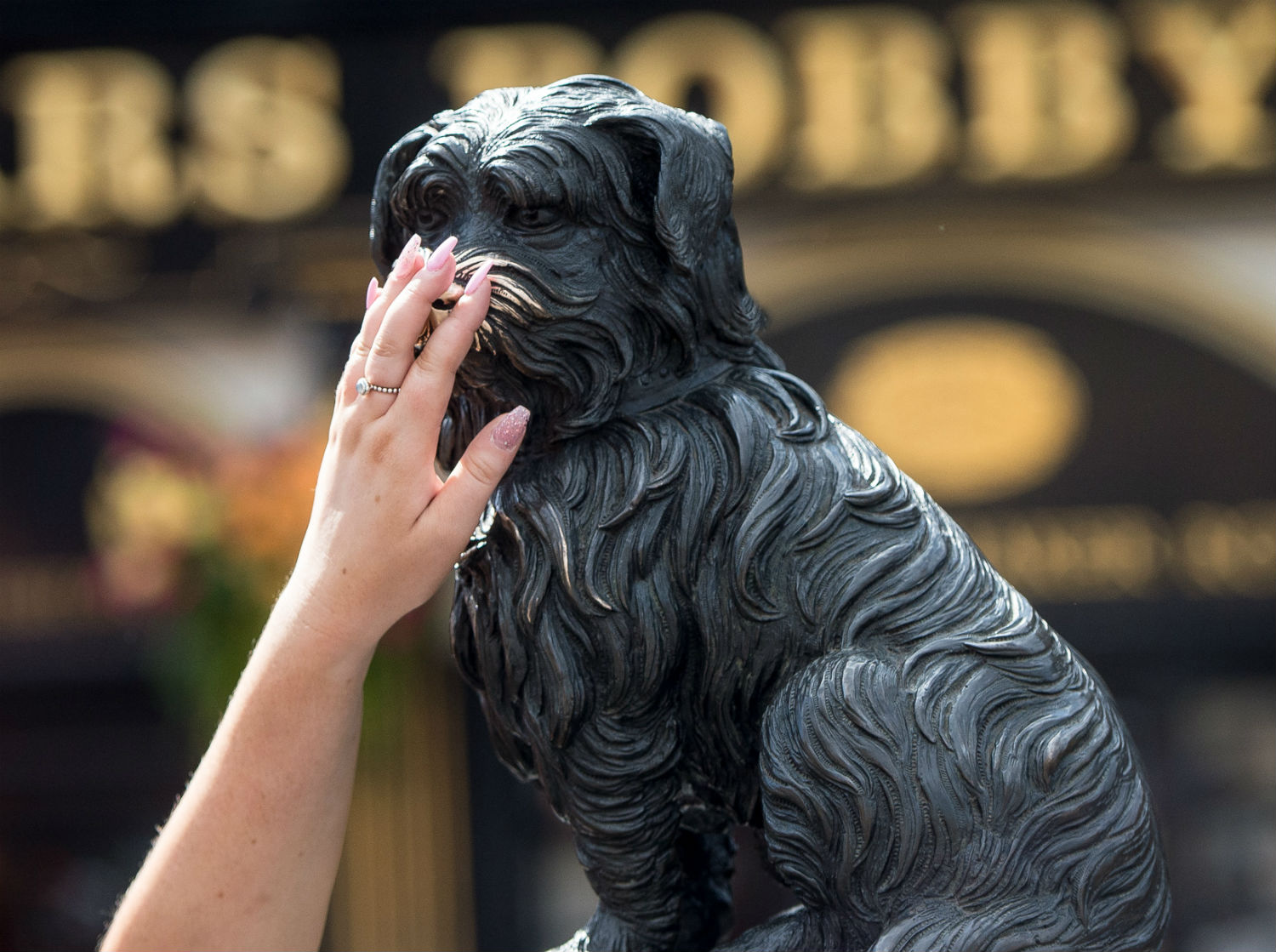 Yesterday, with the Fringe in its first week, visitors were queuing up to touch the monument.
John Lantz, from the United States, explained: “Our waitress in the Greyfriars Bobby pub told us that it’s a fairly recent phenomenon. She said when she touched the nose, the same day she got a job at the pub.”
Michael John has been coming to the Edinburgh Festival for four years and shared the belief that the damage to the nose comes from a desire for good fortune. He said: “Whenever you are taking a show you have to do it to make sure you have a successful Fringe.
“I have not a clue where it originated from. It has just passed on from person to person.”
A tourist from Italy, Edoardo Machetti, said: “You have to touch the nose for good luck.
“I’m always glancing at other people and seeing that they want to touch Greyfriars’ nose. I think it’s because it’s the first funny place you see on the statue.”
James Bragg, from Glasgow, added:”It’s good luck apparently. I heard about it years and years ago, I hope I didn’t make it up.
“There’s nothing in the story about good luck or anything but I think it’s just one of those things.”
The legend of Bobby says that the Skye Terrier kept vigil at his nightwatchman owner John Gray’s grave for 14 years after he died.
In 1873, the Town Council granted permission to erect the monument opposite Greyfriars Churchyard, where Bobby and John are buried. 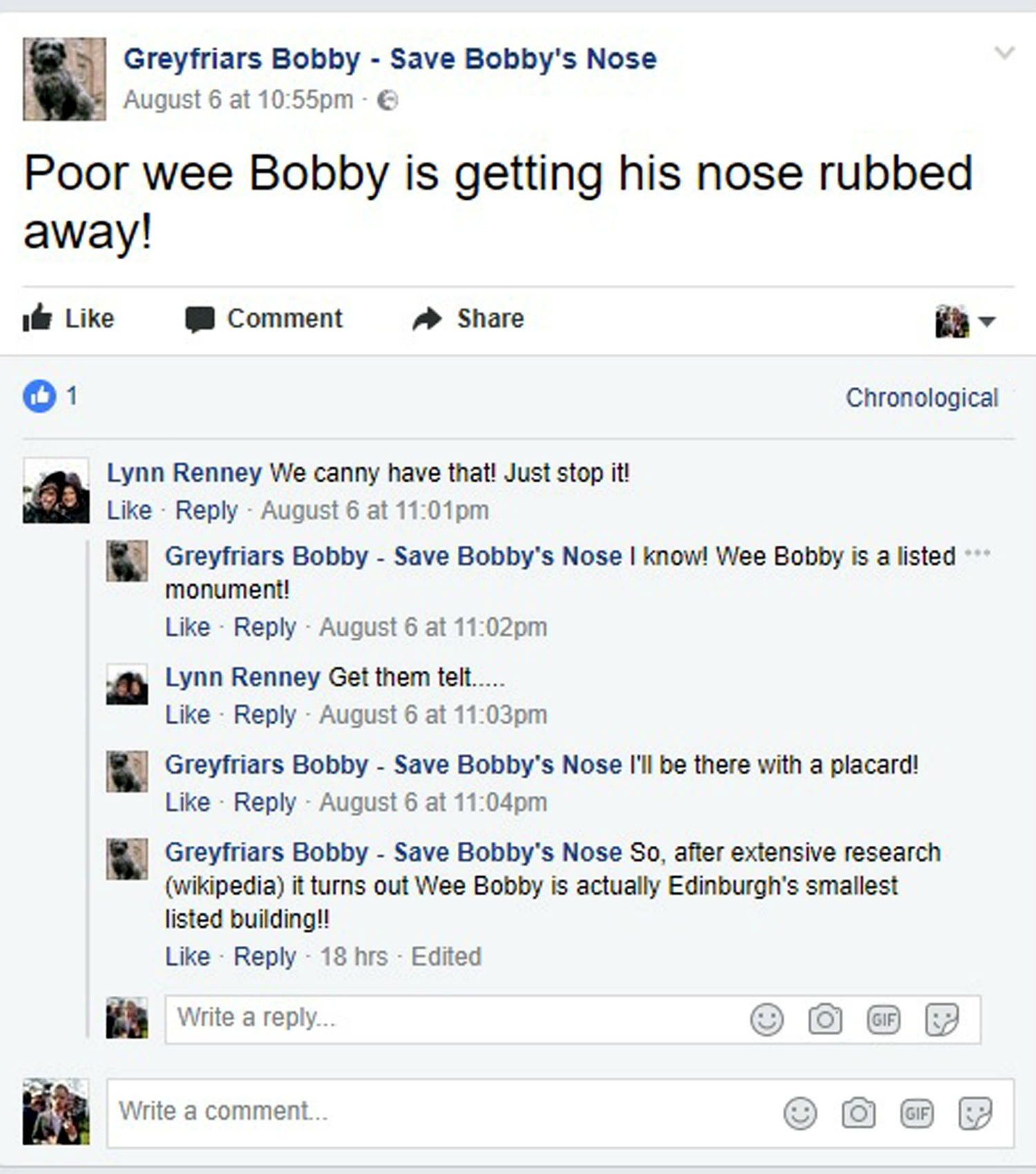 Sources at Edinburgh Council say there are currently no plans to carry out repairs. The last time damage was repaired was in the autumn of 2013.
A spokeswoman for the council said today: “While he enjoys attention from visitors and loves to have his photo taken, Bobby gets distressed when people rub his nose.
“It really does cause damage to the statue, which is why we urge people to be respectful.”