HILARIOUS video footage has captured the moment a streaker ran on to a dog track – pursued by a security man.

Josh Messer, 21, from Manchester, uploaded the funny clip to Twitter yesterday (THU) which shows the naked joker man leaping a fence before he is pursued with less-than-greyhound speed by a man in a bright yellow polo shirt.

The incident took place at the Belle Vue greyhound race track in Manchester and shows the man making his way round most of the track as he evades security.

Josh uploaded the 42-second-clip with the caption: “Scenes at Belle Vue dogs.”

It’s since had over 6,000 retweets and over 8,000 likes with countless more comments from amused users.

The clip starts with a shot of a fully naked bald man as he leaps over a gate towards the dog track.

What appears to be a security guard in a yellow polo shirt is in hot pursuit and quickly enters the shot as a voice seems to shout: “Go on Lee.”

The same voice then shouts to the man in yellow to “catch him up” as the camera shows the naked man starting to sprint around the dusty dog track. 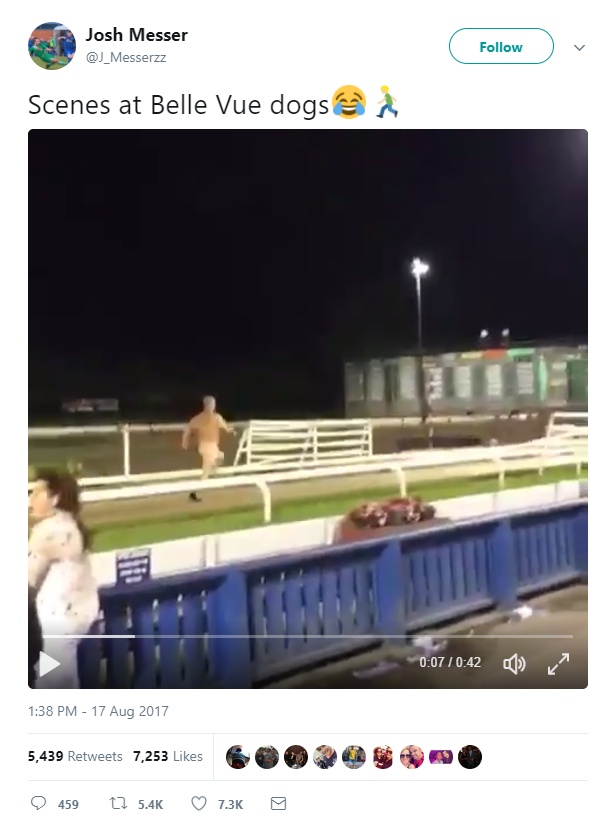 The crowd start to cheers and whistle as the pair hotfoot it around the enclosure, past the scoreboard.

The footage ends as with a shot of the crowd as the cheer on the two racers.

Twitter users have been quick to react to the hilarious video.

Chris Davidson commented: “Hahaha he is off, get yer money on him.”