A SCOTS Gran has caused a Twitter storm after pictures of her pimped up car went viral.
Ciara Molyneux, from Edinburgh, posted three photographs of her gran’s kitsch Smart Car – complete with pink eyelashes on the headlights – on twitter on Sunday evening (AUG 13).
Ciara said her gran, Rona, 61, claims she is ‘artistic’ and sees no problem with the garish design.
The pictures show off the car’s flashy exterior and interior. Complete with brown fluffy seat covers, scatter cushions, and pink fluffy steering wheel and gear stick covers.
There are even cuddly toys, including an orange orangutan suspended from the roof.
The post now has over 38,000 likes and 6,500 retweets.
However, the way Rona designed the exterior of her white 2003 plate is what caught most twitter users’ attention.
Not only does the car have pink eyelashes and a lipstick kiss sticker above the radiator, but one particular sticker on the back bumper was the biggest cause of amusement for social media users.
It reads: “If you can see my beaver, you’re too close!” 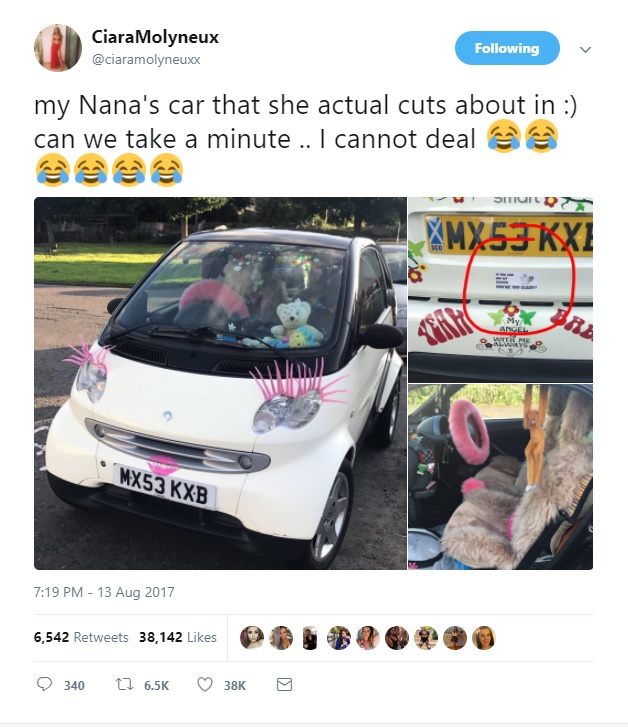 Ciara posted the pictures with the caption: “My Nana’s car that she actually cuts about in, can we take a minute. I cannot deal.”
Twitter users were quick to comment on the post and praise Ciara’s gran’s style and creativity.
Corey Galloway wrote: “Never seen a car like it If I’m honest, she ain’t messing around.”
To which Ciara replied: “She definitely is not, she claims she’s just artistic. She honestly cracks me up.”

_zoecook commented: “This will be me as a grandparent, she’s my actual idol.”
N0elgallagher wrote: “Honestly, everything I aspire to be.”
Larajpw_ added: “ I desperately want those seat covers, it matches the chewbacca seat belt!”

Others were not so keen, but found the funny side.
LeahmackieX commented: “That is 100% not safe how can she f** change gear and use the steering wheel. I love her.”
Katie Fleming added: “The hanging monkey is terrifying.”
Jonny Dallas said in a reply: “Think I’d have to roundhouse kick you if you showed up in that.”
Alanburns88 replied with a gif of the van from comedy Dumb and Dumber, decorated to look like an oversized dog, careering over a hill. He added the caption: “Here she comes flying down the M8.”