JAMIE Murray has branded his “little” brother a “clown” in a Gerry Rafferty-themed post on social media.
The doubles tennis ace shared the entertaining snap of Andy Murray sitting to his left and grinning manically at the camera.
Borrowing from the classic Stealers Wheel song “Stuck in the Middle with You”, Jamie wrote: “Clowns to the left of me. Jokers to the right. Here I am. Sharing a room with you.”
The pair are sharing an apartment in New York ahead of the US Open which begins next week.
Jamie, who recently won the Wimbledon mixed doubles title alongside Martina Hingis, also posted a photo of the view from their Fifth Avenue accomodation.
Uploading the image, he wrote: “5th Avenue #NYC”
However it is the snap of the unusually expressive Andy that has been liked by nearly 5,000 social media users, and around 100 comments. 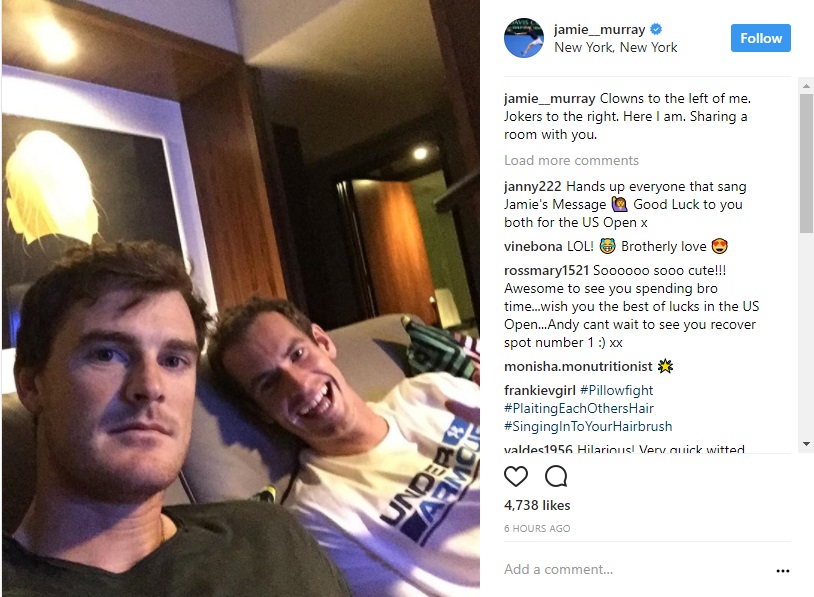 curlupdi26 wrote: “Hope that big smile means Andy is fit! Good luck in US Open!”
khalfpenny said: “Looks like @andy_murray is playing the annoying little brother role very well”
doctorse7en commented: “A rare moment of @andymurray smiling!”
chefcrichton85 wrote: “Kill you to smile Jamie boy?”
Andy lost his number one ranking yesterday after Spanish rival Rafael Nadal, 31, replaced the Brit at the top.
He later told fans on social media: “Today is a special day, going back to number one, I’m very happy.”
Stuck in the Middle With You, written by Gerry Rafferty and Joe Egan, reached number 8 in the UK charts in 1973.