EVENT: Stephen McGann – Flesh and Blood: A History of My Family in Seven Maladies (Simon and Schuster)

STEPHEN McGann loves his son – you can really feel it.

He mentions him more than a few times during his chat about his latest literary offering, which charts the history of his family through 150 years and seven maladies.

But for the actor, aka Dr Turner in Call the Midwife, flagging-up the boy’s musical turn at the Fringe with all the parental chest-swelling of an American soccer mom, has deeper significance in a much bigger picture.

It means, he says, that though the McGann line carried the blood of slum dwellers, a force of deep love swam against its fierce tide, and, his son, in the audience, and the McGann brothers (including actors, Joe, Paul and Mark) as a whole, represent not just victory over real hardship, but survival.

He then reiterates the deal in practical terms because, wearing his other hat as a science communicator, the subject of his MA, he says you have to frame what goes on in families in socio-political and national terms.

His family were all but workhouse poor; their health and education paper thin – their bodies and lifestyles as ‘ignorant Irish’ were regarded as diseased – and in this sense, they were seen by the middle classes as incurable.

Until, that is, the advent of the NHS in 1947 changed everything and they – and a nation -began to thrive. 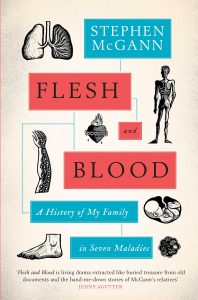 During a lifetime of genealogical endeavour to uncover the genesis of the McGann boys – born of a Liverpool factory worker and housewife – who bucked the trend and turned all lovey, he has come to understand, it really is quite miraculous that any of them made it.

The writer’s forensic unearthing of family stories of malnutrition, starvation – sometimes til they bite the earth – disease, corruption and social leper-hood, makes their thespian insistence appear like a floppy, but irresistible bit of icing sugar on a rising, once sunken cake.

Comparison with contemporary refugees who were called ‘cockroaches’ are not futile. Exiled from a condemned homeland (in the McGann case, from Roscommon after the potato famine) they became the lowest of the low in an unwelcoming new land that had promised milk and honey. In the same breath, he mentions the families of Hillsborough who were ignored for so long.

McGann’s obsession with genealogy began during his teens as a nerdy, gawky, student, where his own battle with agoraphobia nearly saw off all ambition.

The book, as a body of work, is divided into disease themes: hunger, pestilence, exposure, trauma, breathlessness, heart problems and necrosis.

It led him to ivory towers his ancestors could never have dreamed of, from whence he continued to dig and exhume.

Sustained by the humble potato until it failed, he speaks of the family’s voyage across the Irish Sea to the ‘hot houses of disease’ that were the slums, where they began to engage in maritime life.

He immersed himself in medical records and death certificates to bring colour to their cheeks, flesh to their bones, and found some fantastical tales. One of them even jumped overboard with the captain of the Titanic and clung to the last lifeboat!

He speaks movingly of the death from starvation of a child of his great grandfather, Owen and wife, Susan  – a little girl, Teresa. He juxtaposes the tragedy to the ‘outrageous plenty’ in the nearby dock warehouses.

And then he frames it as a ‘what if’ in his own life: “I began to think, ‘how can you cope with your child dying in your arms?’.” He thinks of his own son’s ‘Mediterranean diet and fine physique’.

Eventually, tales through the decades started to come so thick and fast that Stephen and his brother Joe came up with the idea for a BBC drama: The Hanging Gale, about tenant farmers and their battle to keep their home during the Irish famine.

The brothers all found themselves in a rented manor house in Donegal and the irony of having rain machines and rags courtesy of the BBC props and costume department was not lost on them.

Flesh and Blood is candid and filled with stories of angst that somehow McGann, lifts with a lightness as gentle as his scouse lilt. He tells us how his mother bore twin boys who did not survive, before the other McGanns, how she talked to him frankly about her wedding night, how his father was war-damaged and suffered depression and how the other major female influence in his life, his wife, nearly died.

All these tales have shifted his being a little. McGann was determined to eschew the actor’s memoir genre. By framing his book in hard history and a work in progress, which will doubtless unearth more until his dying day, he has been able to capture serious inquiry about who we are in all of us.