A BUNGIE-jumping bagpiper manages to keep playing Scotland the Brave as he plummets head-first towards a river at 50mph, in a hilarious new video.

Roddy Garden also made the 132ft jump wearing a kilt – but wisely decided not to be a true Scotsman.

Incredibly, Roddy plays just a few bum notes at the bottom of his descent and as he is flung skywards above the River Garry in Killiecrankie, Perthshire.

As his pals can be heard laughing uproariously in the background, the 49-year-old carries on playing, upside down, as he bounces on the bungee ropes.

Garry, from Cove, Argyll and Bute, went viral recently with a video of him playing the pipes on a zip line but his new stunt has put that in the shade.

Speaking today, Roddy said: “It was really good. I expected to be very nervous but when I got there I just thought, ‘okay, let’s go for it’.

“I said to my friend beforehand, ‘do you think I should do it true Scotsman style and he was just like, ‘please no’.

“I had to strap the pipes in to make sure I wouldn’t let go of them.”

He added: “There was a wee jolt when the rope bounced which you can hear in the video, but apart from that I was concentrating on just trying to keep playing the song.

“Usually when you play the pipes you keep your fingers quite loose, but mine were clutching on.

“I would definitely recommend doing it. It was a hoot.”

This isn’t the first time Roddy has filmed himself bagpiping in unusual circumstances.

Earlier this month, Roddy filmed himself playing the instrument while ziplining 30 metres (100ft) above a stunning Highland beach.

He managed to keep The Taking of Beaumont Hamel going even as he hit 40mph on the 227-metre (750m) line at Ceannabeinne Beach near Durness.

He captured the footage while he was visiting the area to propose to his girlfriend Alison Farquhar.

The TV and film driver has experience of playing the pipes on high mountains and walking in the sea and revealed he has a long list of places he plans to pipe. 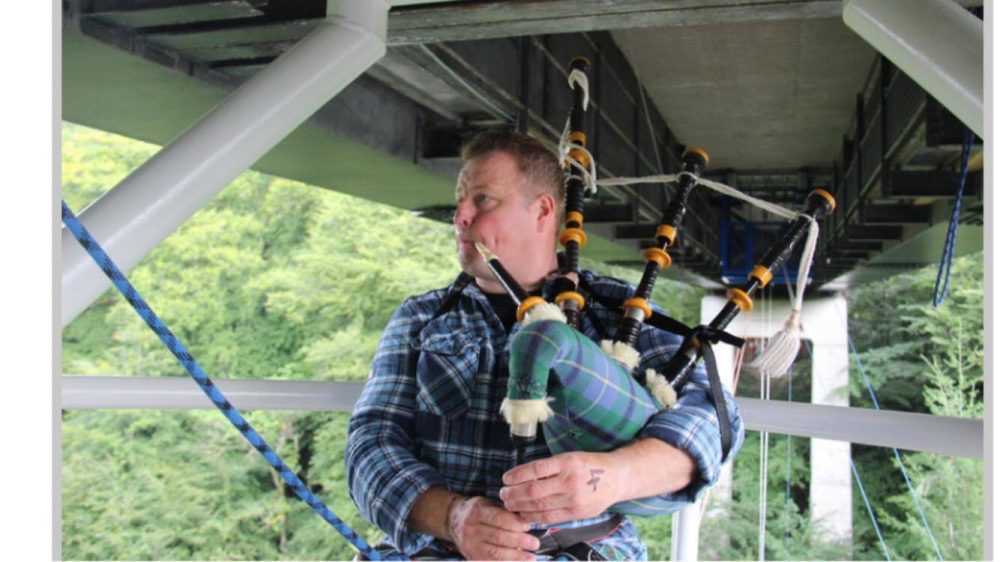