AN American news website has suffered a backlash after using a picture of Scotland’s First Minister as a “generic” scientist.

Vox illustrated an article about health care reforms in the US with a picture of a woman looking into a microscope – apparently unaware the woman in question is Nicola Sturgeon.

The blunder in the article – “What Rep. John Conyers’s sweeping single-payer health care bill would actually do” – was spotted by Twitter user Jamie Ross. 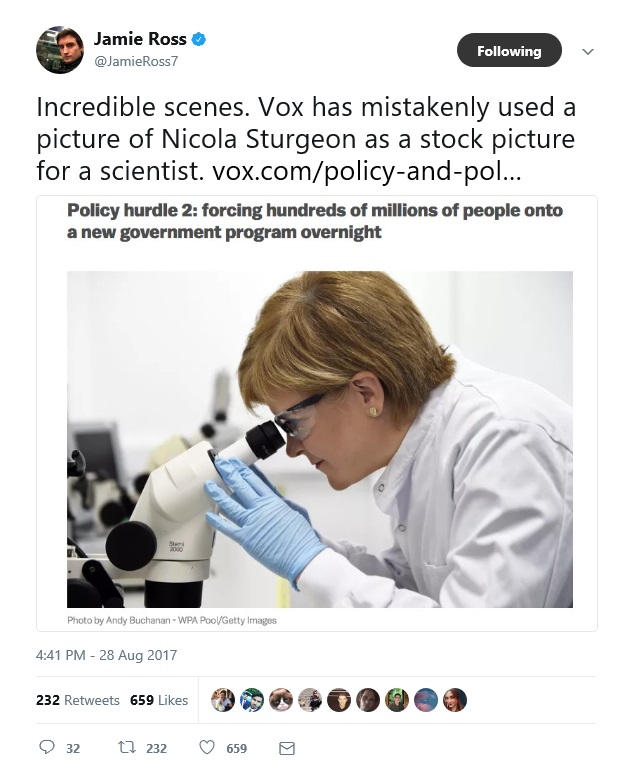 Jamie, Scottish reporter for Buzzfeed, wrote: “Incredible scenes. Vox has mistakenly used a picture of Nicola Sturgeon as a stock picture for a scientist.”

The picture, by Andy Buchanan, is on the website of picture agency Getty with the very clear caption: “Scotland’s First Minister and Scottish National Party (SNP) leader, Nicola Sturgeon, visits a life science laboratory on August 9, 2017 in Glasgow, Scotland.”

Tweeting an image of Germany’s leader Chancellor Angela Merkel, @joncstone wrote: “amazing that they would make this mistake when there are so many other perfectly good photos of scientists”

@BrimhamG said: “I’m sure like every good Scot she has a science Higher!”

@RatherRyan commented: “It’s Ed Miliband with the flu all over again!”

Vox have since removed the image.

That tweet was a reference to NBC last year using an image of former Labour leader Ed Milliband to illustrate a story about flu.

The picture, again from Getty, shows Milliband blowing his nose into a tissue during Labour Party Conference in Liverpool in 2011.