AMY Macdonald has shared a snap of the cake she received for her 30th birthday – a Greggs macaroni pie.
The incredible creation was presented to the Scots pop star after a small and “intimate” gig in Glasgow.
The real Greggs macaroni pie is no longer available after the firm controversially stopped making them in 2015.
So Macdonald was delighted to receive a giant, sweet version of the much-lamented savoury classic.
After thanking her “ace” fans at the show, she tweeted: “Also, thank you to the mystery cake provider. Macaroni pies for life.”
The macaroni pie cake appears to have pasta made from marzipan on top with cheesy-looking sauce and an authentic looking pastry case. 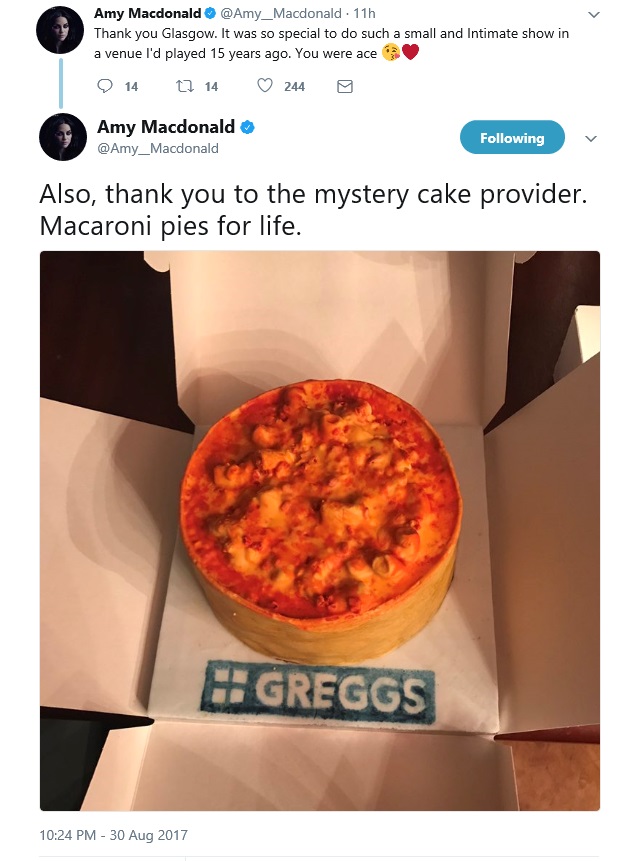 Both posts have received nearly 400 likes with some commenters admiring the incredible baking skills.
@ryan451_ commented: “When did free cake start to become a perk of the job??”
@DatLilS*** said: “Um, not familiar with this – is that a tomato-ish macaroni & cheese in a tub? I think I need some.”
@TheGlasgowDude responded: “I use to put cheese strings on them”
In 2015 high street bakery chain Greggs axed the savoury snack from its menu causing mass outrage across the country.
A celebrity backed campaign was launched to save the much loved lunch time treat, with Still Game’s Sanjiv Kohli backing the return of the pie.
The issue was also discussed at First Ministers Questions when Nicola Sturgeon admitted she was “not a lover of the macaroni pie”, but said she had been lobbied by her father to join the campaign.
However, Greggs stuck by its decision, saying: “Unfortunately over recent years it had become the smallest selling line from our savoury counters in Scotland.”