Troubled ScotRail was under fire from angry customers again today (wed) – after trying to give away tickets worth £1m.

Travellers were left infuriated after the firm’s website repeatedly crashed, crawled to a stop, and ran out of tickets on certain lines within a couple of hours.

Critics claimed the firm, which desperately needs good PR after a series of setbacks, had scored another own goal. 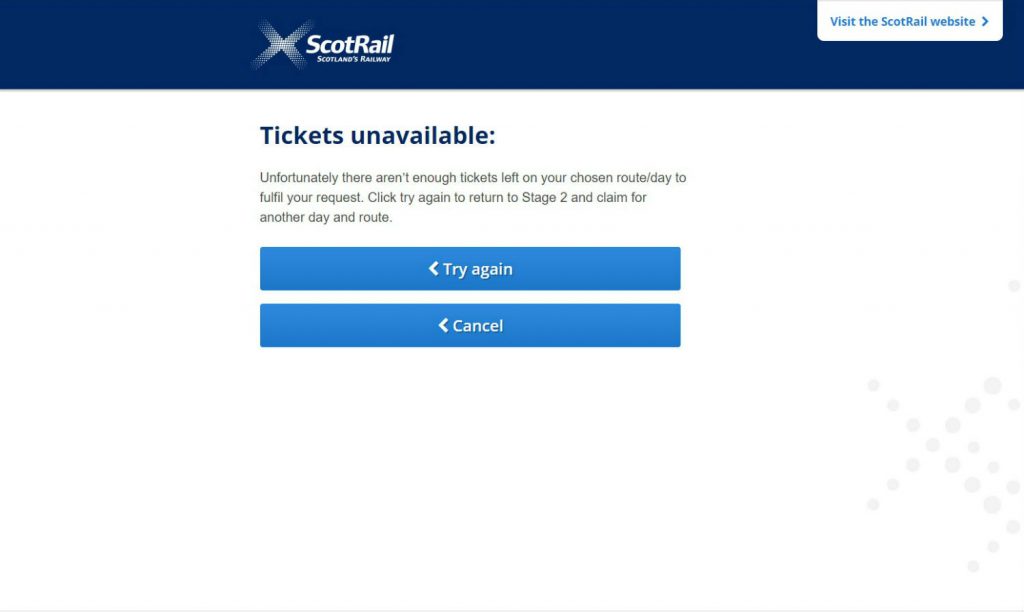 Launching the giveaway, ScotRail promised £1m of free off-peak day return tickets on “a huge range of routes to Scotland’s most magical destinations”.

Travellers were told the tickets could be claimed between today and September 15, adding: “It’s our way of saying thank you and your way to see a little bit more of Scotland.”

But ScotRail’s website was hit within hours by angry users, including Ross Smith who asked: “@ScotRail can’t you do anything right. Your ticket giveaway site is awful. Crashing every two mins.”

Dave Scott added: “Think Scotrail might have scored a bit of an own goal with its well-intentioned £1m ticket giveaway – site crashes.”

“Availability is laughable, none of the routes I could have used were available.”

Twitter user Patricia replied: “I tried every available date Stranraer to Glasgow and vice versa – no tickets. Seriously think no tickets were ever available on this route.”

A few passengers were a little more forgiving of ScotRail, however.

James Mitchell said: “I was too slow to obtain a (useful to me) ticket in the ScotRail giveaway, but what a nice initiative. It’s the small things sometimes.”

Mrs Gratton added: “Just got my free #ScotRail giveaway tickets. Perth to Inverness. Nice day out to enjoy the beautiful landscape. Thanks.”

A ScotRail Alliance spokesman said: “The level of demand we’ve seen is absolutely unprecedented. We have been giving tickets away at a rate of three per second.

“Already over 30,000 claims have been processed, and we thank our customers for their patience. It will be worth the wait.”

Last week an FOI request revealed that one in seven trains on the new Borders Railway has been cancelled or delayed in the two years since the service opened.

And ScotRail has come under increasing pressure over the past year, agreeing a performance improvement plan with the Scottish government and Transport Scotland in September last year.