ALDI are investigating a horrified customer’s claim that she found a dead frog inside a packet of salad.

A disgusting photograph, posted to the supermarket’s Facebook page, shows the shrivelled amphibian sprawled beside the salad.

The stomach-turning picture has gathered over 7,700 likes, 7,300 comments and nearly 3,000 shares since it was posted on Friday afternoon (SEPT 8).

The decomposing frog appears to be missing limbs and had a large part of its head gouged out.

Josie Caine, from Manchester, made the discovery while she was plating up the crunchy salad. She posted the picture to Aldi’s facebook page with the caption: “Horrified after finding this dead frog in my Aldi salad!”

An Aldi spokeswoman said: “We thank Ms Caine for returning the product to store to enable our teams to investigate this isolated incident fully.

“We are speaking with our supplier to understand how this could have occurred and we will keep her fully updated.” 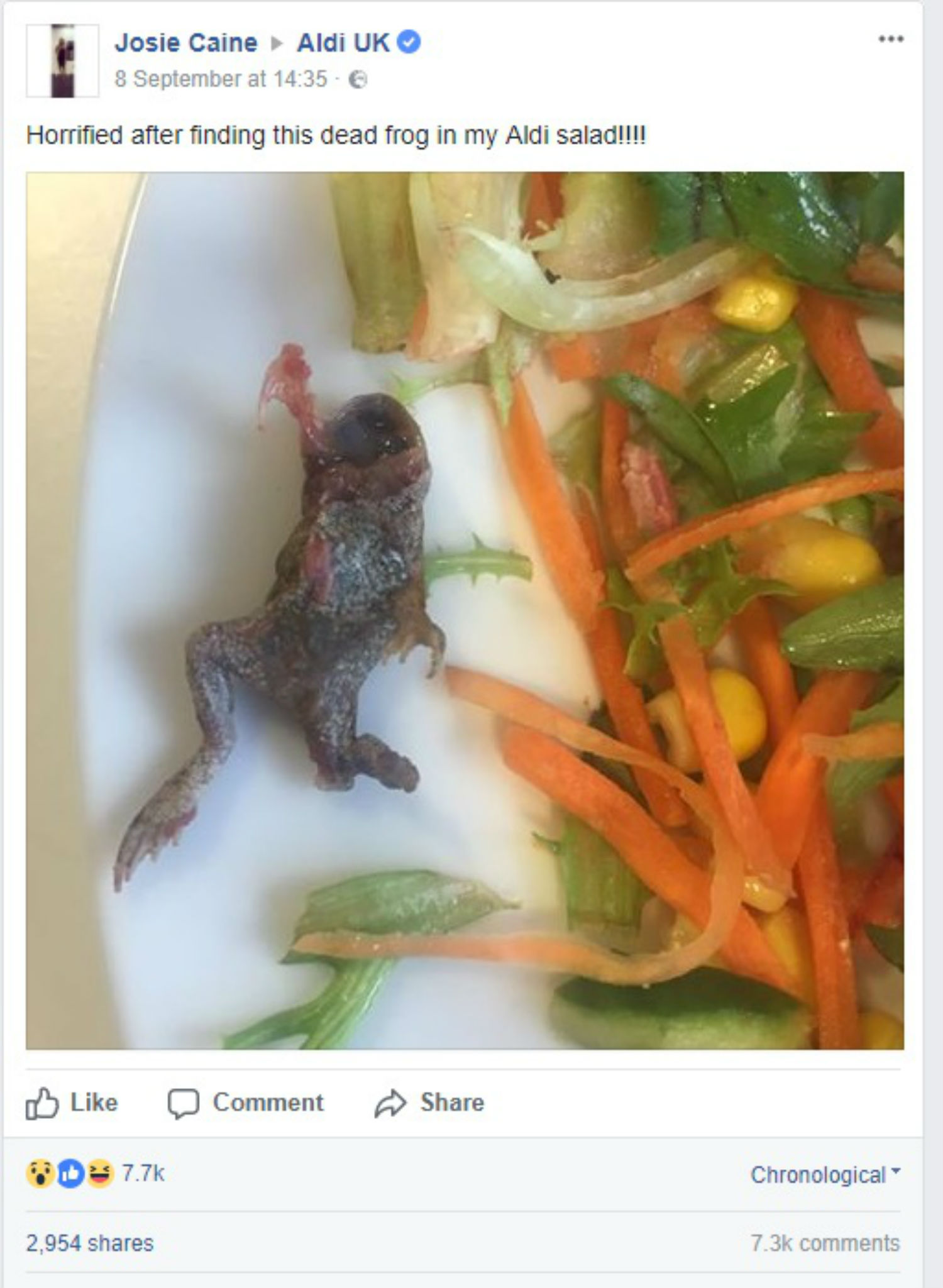 Marie Stockwell said: “Aww, I won’t be eating their salads again then.”

Linda Watson-Eyre added: “What is happening with our food lately? Everyone’s finding something in something, it’s just not on, more rigorous checks should be made. It’s disgusting.”

Rebecca Diston commented: “I will never open a bag of salad without checking again. This will give me nightmares for weeks.”

Some social media users were not surprised by Josie’s discovery, and others couldn’t resist making jokes about it.

Ali Grinsted said: “I found a live frog in my salad from Asda! The lady on the checkout felt it jump as she scanned it. They took it outside and let it go. It put me off salad for a while!”

Jonathan Rennie added: “This doesn’t surprise me, I’ve worked removing unwanted items from peas as they went along the production line, bits of frog were quite a common occurrence.”

While Keith Runner joked: “That’s not fair I didn’t get one in mine…!”

Sarah Jane-Walters added: “Hop down to your local aldi and croak up a fuss.”

Michelle Pool wrote: “Surely if this was in your bag of salad those lovely greens next to it wouldn’t look so good, is this for real?”

Abigail Hacking added: “The chances of the frog making it into the salad almost whole when it’s washed and chopped..”

Rachel Mooney said: “Don’t believe it. Would you continue to use the salad like this person has? It seems like it’s all plated up ready to eat. No way would that happen after finding a dead frog. You would keep the whole thing as evidence.. compo face at the ready!”

This is not the first time a dead amphibian has been discovered in someone’s salad in the UK. In 2015 a woman from Manchester discovered a decomposing frog in her Nando’s chicken salad, after eating several mouthfuls. And, in 2012, a London woman found a similar carcass in a bag of supposedly pre-washed spinach she had purchased from Tesco.