AN astonishing video shows a white line painter working without protection in the middle of a road almost getting hit by an overtaking vehicle.

The workman is seen ambling along the middle of the busy road without any traffic cones, barriers or lights to offer protection or warning to drivers.

The shocking safety lapse, filmed in Shotts, North Lanarkshire, almost turns to tragedy when a driver decides to overtake just as the speed limit on the road changes to 60mph. The van pulls out and has to swerve around the man.

North Lanarkshire Council has launched an investigation and road safety experts said the contractor they used should be “ashamed” of putting workers at risk.

Last year a firm was heavily fined after footage showed a worker halfway out of a manhole without adequate protection from traffic.

The footage shows a line of traffic making its way along the road, passing a barely-noticeable and damaged road work sign approximately a quarter of a mile before the incident happens.

The driver of a white Nissan pickup truck, approaching the national speed limit signs, decides to overtake – even though he cannot properly see ahead and is on hatched white lines. 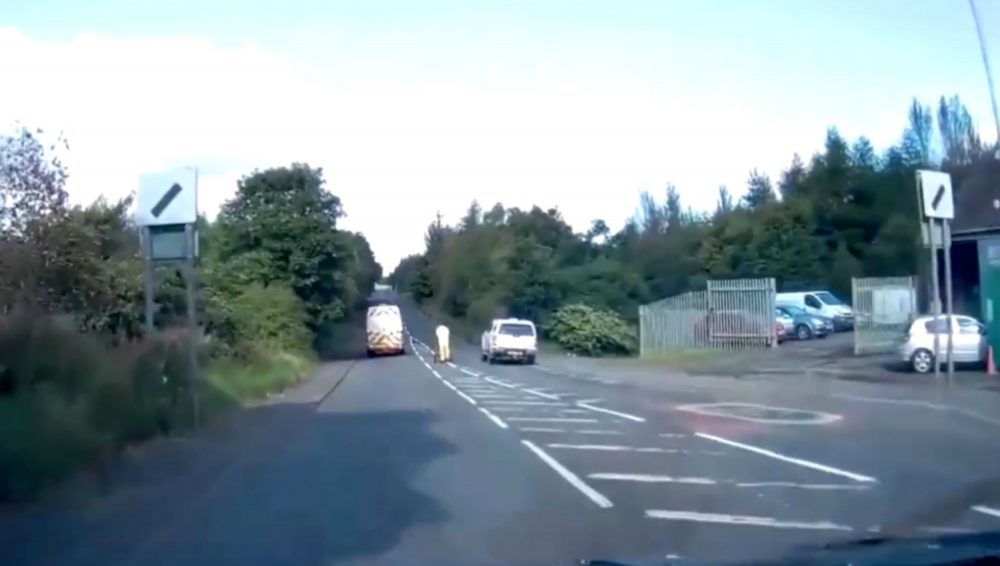 A road worker suddenly appears, pushing a road marking paint machine, with his back to the traffic and no signs of any kind of protection.

The truck driver, and the vehicle following, are forced to drive to the right of the man, who carries on without flinching at the near-miss.

Neil Greig, IAM RoadSmart Director of Policy and Research, said: “The signposting for the roadworks ahead is dangerously inadequate.

“The white lining contractor should be ashamed at putting a road worker at such risk on a section of road that was just becoming national speed limit!”

Stu Mcgregor, who filmed the clip on his dashcam, was critical of the pickup driver. 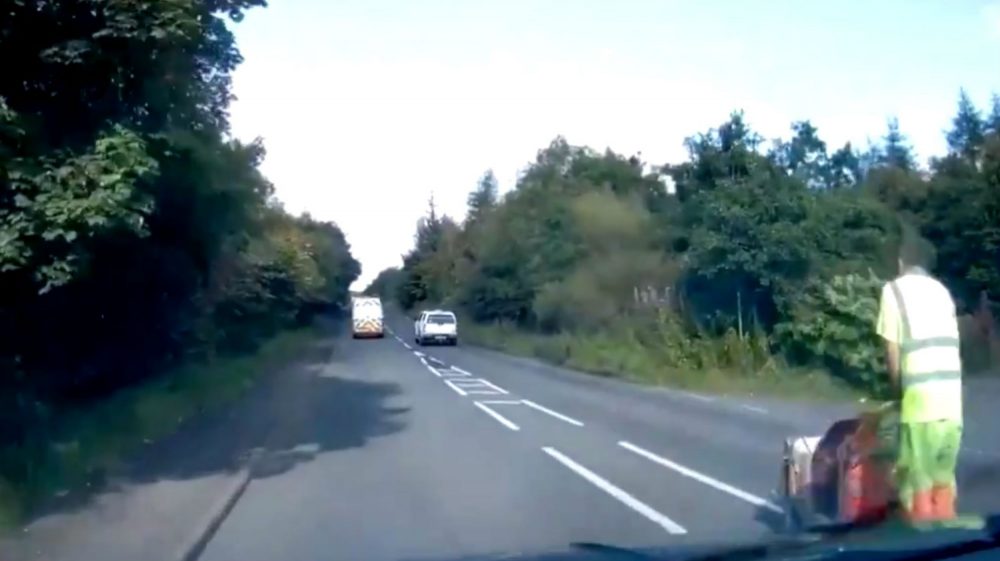 “Idiots like this shouldn’t have a licence,” he said. “This guy was desperate to get past the van in front. It was the road worker’s lucky day.”

A spokesman for North Lanarkshire Council said: “While the individual was not an employee of the council, we expect contractors to undertake work with the health and safety of their staff as a primary concern.

“A full investigation is now underway.”

Earlier this year, footage emerged showing a workman standing in a man hole in Edinburgh with just two traffic cones around him for protection.

The shocking dashcam footage showed a car swerve round the man as he nonchalantly works away in the busy capital city street.

Two traffic cones were perched right on the edge of the hole and appear to be there as much as a barrier as a warning to drivers.

The workmans contractors, CityFibre were later fined £35,000 by the Scottish Road Works Commissioner for ‘a number of serious failures’ to comply with road works legislation.

Against the paw: Leaving dog loose in the car could land you with a £5k fine