A CELTIC fan’s touching tribute to the 66 Rangers fans who died in the Ibrox stadium disaster has taken the internet by storm.

The mystery man, dressed in Celtic colours, left a wreath at the Ibrox memorial on Saturday, shortly before the Old Firm game.

Pictures of the man talking to a security guard outside the ground and of the wreath itself have received hundreds of likes and retweets, with the vast majority of Rangers fans warmly welcoming the gesture.

The tragedy occurred at an Old Firm match held at Ibrox in January 1971. While fans were exiting a staircase a terrifying crush engulfed them – leaving 66 dead and 140 injured.

The post, which shows the fully-clad Celtic fan head to toe in green and white, now has over 1,100 likes and 310 retweets since it was posted on Saturday morning (23 SEPT) before the match kicked off. 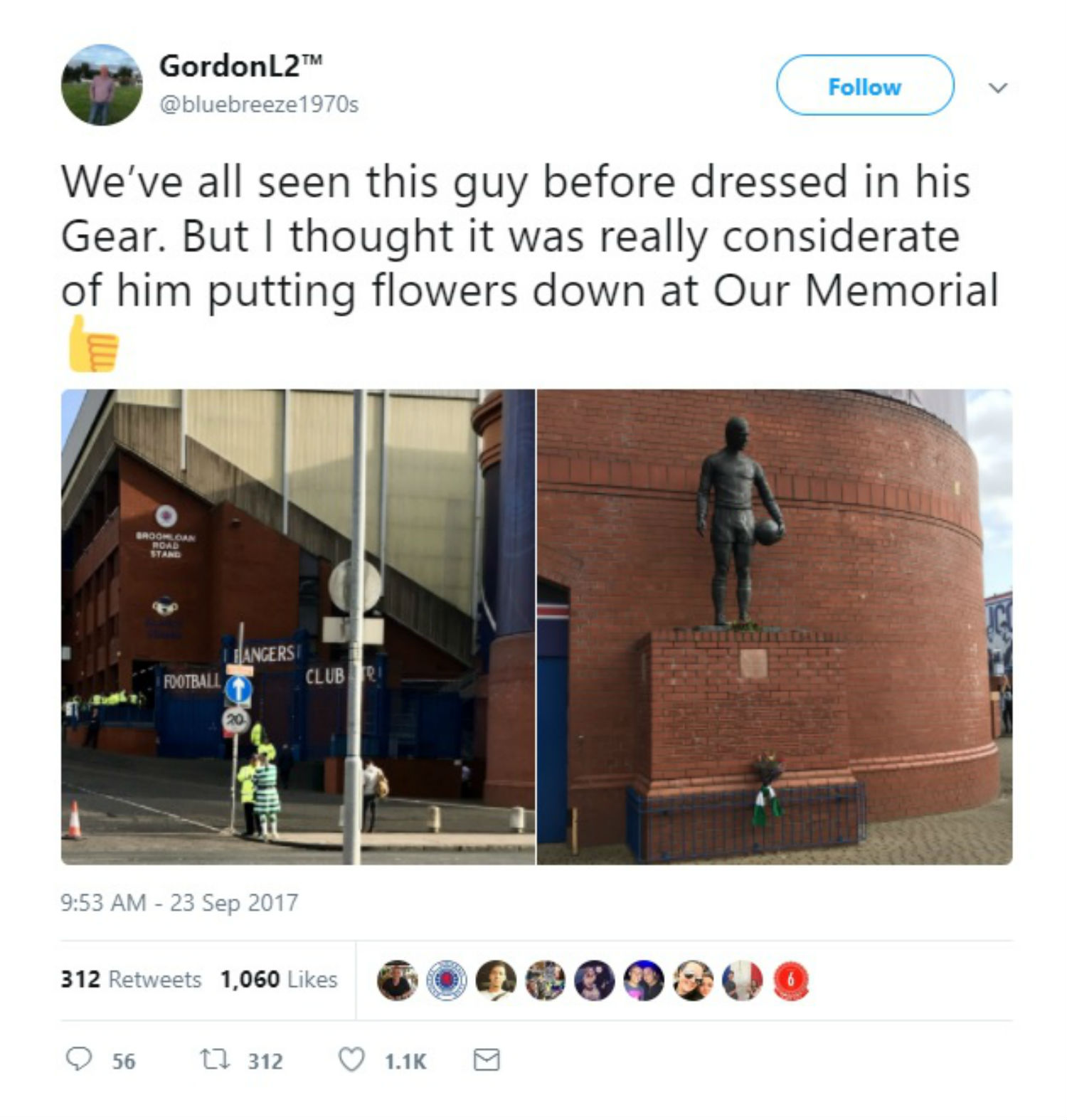 The second picture shows a bouquet of red and yellow flowers tied to the Ibrox stadium disaster memorial. The cast bronze sculpture of then-team captain John Greig looms above the tribute, and bricks with the victim’s names under a small plaque can be seen too.

Twitter user GordonL2 posted the pictures with the caption: “We’ve all seen this guy before dressed in his gear, but I thought it was really considerate of him putting flowers down at our memorial.”

Social media users were quick to comment on the post, and praise the unknown man for his thoughtfulness.

Stuart MacQuarrie said: “He’s a decent guy who turns up for the commemoration on the 2nd of January #rivalsnotenemies.”

Craig Paterson added: “Quality fellow. Regardless of the team you support good to see respect.”

Snooker loopy commented: “For him to take time out to do that is class, not many would even consider it.”

Rab Clark said: “Good to see a bit of respect shown. Fair play to the guy.”

To which GordonL2 replied: “The fact that he doesn’t trumpet the fact he does it is all to his credit.”

Other social media users suggested that the man has laid flowers before, and makes a habit of it when an Old Firm Derby is scheduled at Ibrox.

Twitter user Cuickie said: “He does it every time he’s at Ibrox.”

Darryn Causby added: “He does it every game, he’s a veteran too, good guy. The Green Brigade give him some abuse.”

Some social media users pointed out that at one point the Celtic scarf holding the flowers to the memorial was pulled off.

David Graham said: “Not sure if the flowers were still there but when I passed at 11.00 someone had pulled the scarf off and it was lying on the ground. Shame.”

GordonL2 replied: “That’s disappointing to hear, but it won’t take away from the original gensture…but as you say it is a shame.”

David Graham added: “Exactly. The scarf was just being stepped over but fair play to him for doing it, says more about the idiot who pulled it off.”

Tayla commented: “I’ve seen some post hating the scarf as its green. Fair enough it is a Celtic scarf but this is really nice of him.”

At least 75,000 fans attended the match on January 2nd 1971. Many Rangers fans decided to leave early and it appears that a fan’s fall on Stairway 13 contributed to the deadly crush that followed.

A total of 31 teenagers died while the youngest victim was nine-year-old Nigel Pickup, attending his first football match.

Share
Facebook
Twitter
Pinterest
WhatsApp
Linkedin
Previous articleCash-strapped health board under fire over £10k recruitment trip to Australia
Next articlePeter Houston can leave Falkirk with head held high, says Alex Smith as veteran admits to being shocked at being back in the dugout