AN adorable police dog called Joker has sent the internet into meltdown – on his first day at work.

The three-month-old pup went out for his first ever patrol on Wednesday and immediately won the hearts of travellers at Glasgow Central Station.

Pictures of the tiny German Shepherd taken by one dog lover have already been liked more than 100,000 times on Twitter.

The British Transport Police dog was snapped by Chelsea McFerren with the caption: “I am CRYING. I just met a police dog in training in Glasgow Central. His name is Joker and this is his first day on the job.”

Pictured sitting attentively in front of his human partner, Joker has his ears perked-up for any sounds of suspicious activity in the station. 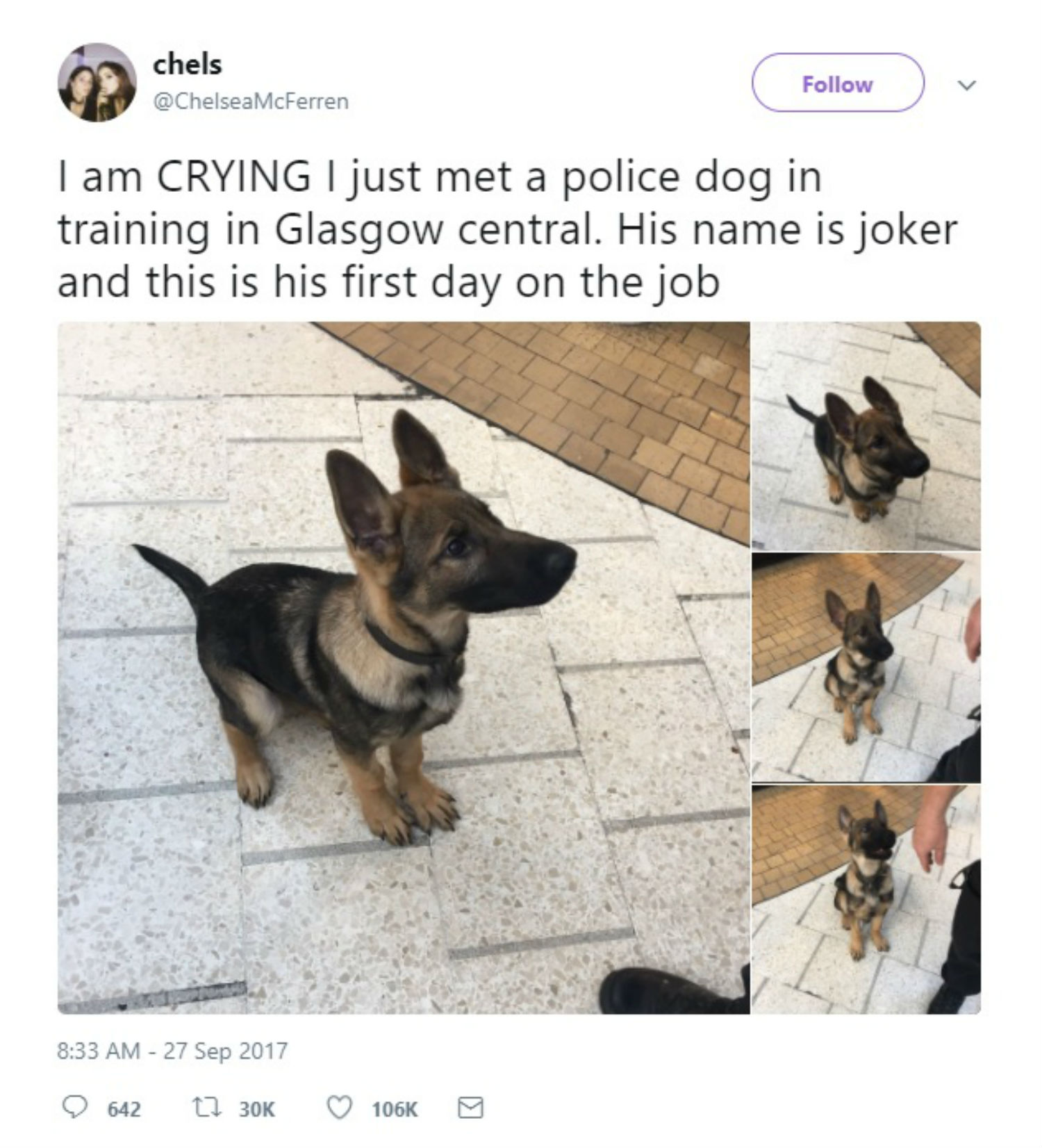 Chelsea added: “I was genuinely almost crying I’ve had the s***est week ever as well so I was like, ‘Thank you God’.

“He’s 3 months old! The pictures I feel make him look bigger than he was though! Beautiful little guy and so playful.”

British Transport Police Scotland commented on the viral post of their newest recruit. They said: “Oh hey there TPD Joker! Hope you enjoyed meeting him, he’s a little rascal and enjoys meeting the public. Thanks for sharing.”

The BTP then posted a short clip later that day of Joker receiving some well deserved treats at the end of his first shift.

The short clip shows Joker playing on the steps of the British Transport Police offices on Glasgow.

His partner tries to hide a biscuit under a police hat, but Joker is too quick for him and snaps up the biscuit in seconds – clearly hungry after a hard day at work.

While Joker sniffs around for any leftover crumbs, the person filming the clip holds up another bone-shaped biscuit.

As soon as Joker notices he trots over and snaps it right out of their hands.

Social media users went wild for the pictures of the adorable pub, with many proclaiming their love for the new TPD.

To which Chelsea replied: “Cutest wee baby ever I swear to god. He was just plodding about everywhere but he was so PROFESSIONAL AND SUCH A GOOD BOY.”

Olly Rayne said: “I love him so much.”

J.L. Forrest wrote: “Well that’s just way too much adorable. I’m not even certain I can handle that. The ears alone are slaying me.”

Others were impressed by the pups professionalism.

Laura May said: “What a good boy actually looks like.”

While SethWolfbaine commented: “Lock me up because I’m going to steal him.”

Another user said they had spotted Joker out on patrol.

Claire Murray wrote: “Oh my god. I met him. He ran into Pret and licked my shoe! He’s a good dog Chelsea!”

Joker’s handler, PC Robert Docherty, revealed that Joker’s fame led to him being mobbed by commuters this morning.

He said Joker is three and a half months old, joined the force about 10 weeks ago and shares his kennel with his police dog pals Ford and Polly.

“Joker is training to be a BTP general purpose dog and he is already living up to his name,” said PC Docherty.

“Since a member of the public posted pictures of him on Twitter yesterday, he has been enjoying his new-found fame. He was even mobbed by fans at Glasgow Central station this morning.”