TENNIS ACE Andy Murray has unveiled a “once in a lifetime opportunity” to train with him and Roger Federer – for an eye-watering £50,000.

The exclusive tennis clinic offers four lucky fans the chance to “personally interact” with the two world tennis stars as part of the Andy Murray Live charity event being held next month.

Murray revealed the details of the event today which includes a black-tie dinner and an exhibition match between him and Federer at the SSE Hydro in Glasgow. 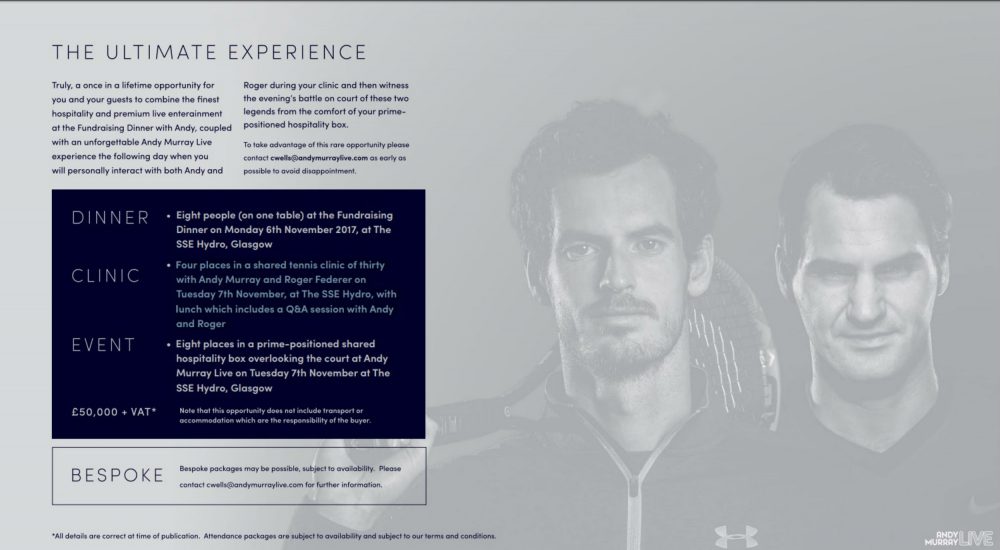 The £50,000 fee includes a table for eight people at the black-tie fundraiser, court side-seats for the exhibition match and the tennis session with Federer and Murray.

Other Table packages are also available, including the chance to sit with Jamie and Judy Murray for a slightly more affordable £20,000.

While a basic six person table at dinner, without any tickets to the match the next day, will set you back £10,000.

The exclusive dinner held on November 6th at the SSE Hydro is being catered by Michelin-starred chef Albert Roux.

Live entertainment will also be provided, with a music performance from Will Young with TV comedian Rob Brydon acting as auctioneer for the evening.

Guests at the event will be given the chance to bid on unusual prizes including a golfing experience with former British tennis number one Tim Henman and a set of used rackets from the big four – Nadal, Djokovic, Federer and Murray.

A brochure sent out to fans by Andy himself said: “Dear Guest,
“Following the success of last year’s inaugural Andy Murray Live tennis event, I’m delighted that we are returning to The SSE Hydro, Glasgow on Monday 6th November for what promises to be a very special black-tie fundraising evening in aid of Unicef and local charity Sunny-sid3up.

“Although standard tickets to the tennis event are sold out, it is still possible to join us at the Fundraising Dinner by buying a table.” 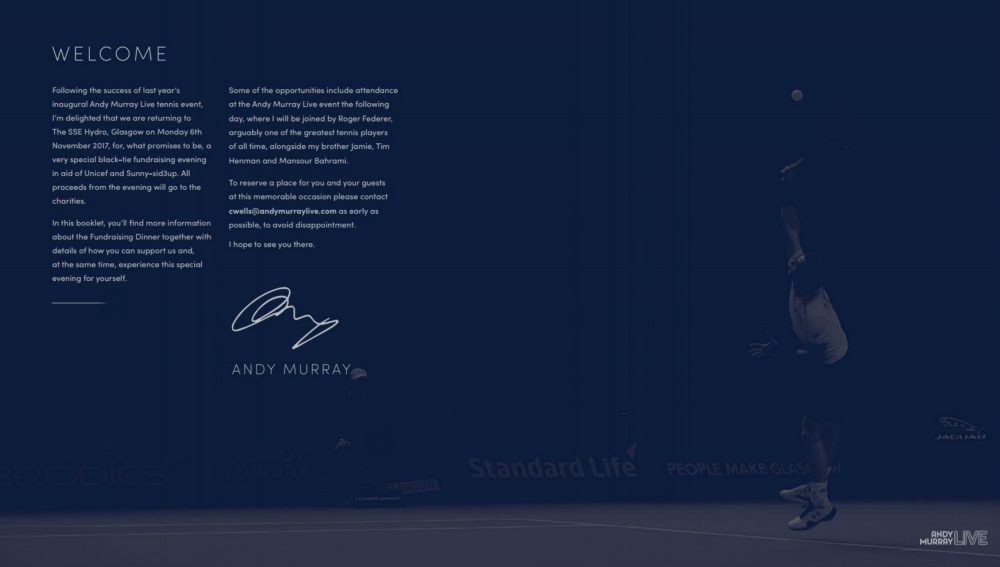 The brochure added the £50,000 table is “The Ultimate Experience”.

It read: “Truly, a once in a lifetime opportunity for you and your guests to to combine the finest hospitality and premium live entertainment at the Fundraising Dinner with Andy, coupled with an unforgettable Andy Murray Live experience the following day when you will personally interact with both Andy and Roger during your clinic and then witness the evenings battle on court of these two legends from the comfort of your prime positioned hospitality box.”

“Four places in a shared tennis clinic of thirty with Andy Murray and Roger Federer on Tuesday 7th November, at The SSE Hydro, with lunch which includes a Q&A session with Andy and Roger”