The Scots actor, who appeared in a Weinstein movie, took to Twitter to break his silence over the claims, admitting he’d heard “rumours” about the producer and former executive for “years”.

In recent days a string of actresses have come forward accusing Weinstein of harassment including high profile stars Angelina Jolie and Gwyneth Paltrow.

Hollywood’s male actors and directors have been criticised for failing to condemn Weinstein. 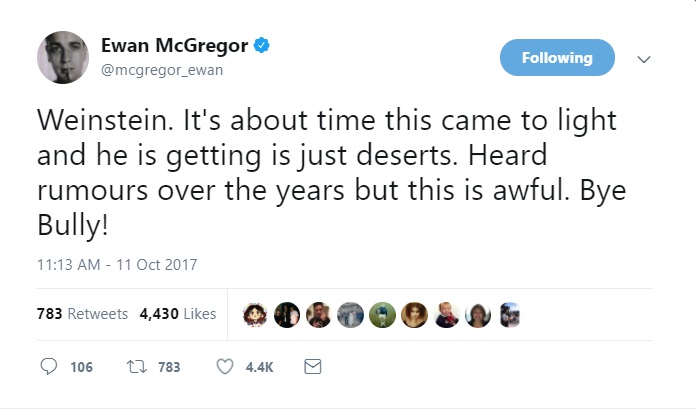 McGregor tweeted: “Weinstein. It’s about time this came to light and he is getting his just deserts. Heard rumours over the years but this is awful. Bye Bully!”

The 46-year–old actor from Perthshire starred in Weinstein’s film Stormbreaker in 2006.
Followers on the Scots Twitter page have commented on his tweet supporting him.

? @Williams_Wales said: “Shame everyone heard rumours but really knew what was going on and to save their careers put other people at risk of harassment?”

@_daiz7_ commented: “Thank you so much for speaking out, couldn’t love you more than right now!”

@JFBakerAuthor wrote: “Fair play to ewen and those speaking out in support, all those saying everyone knew need to check themselves. Rumours are just that.”

The co-founder of The Weinstein Company faces sexual harassment claims dating back nearly three decades, which came to light in the New York Times.