JK ROWLING faces a creepy sight every day as she enters the “writing room” at home – a huge cobweb.

The author tweeted a picture of the room’s black doors and gothic-style grey handles covered in a large cobweb today (THU).

She captioned the picture: “Every single morning for the past few weeks I’ve had to break a cobweb to get through my writing room doors and I have so many questions.”

She added in the thread: “Is it the same spider? Why is it never there when I turn up? Has it not noticed that webs woven between these handles never survive?

“Does it, on some subconscious level, seek failure? Or is it sending a message about persistence in the face of overwhelming odds?

“Every morning, I sit down thinking about the web I’ve just broken. That is the spider’s bleak victory.” 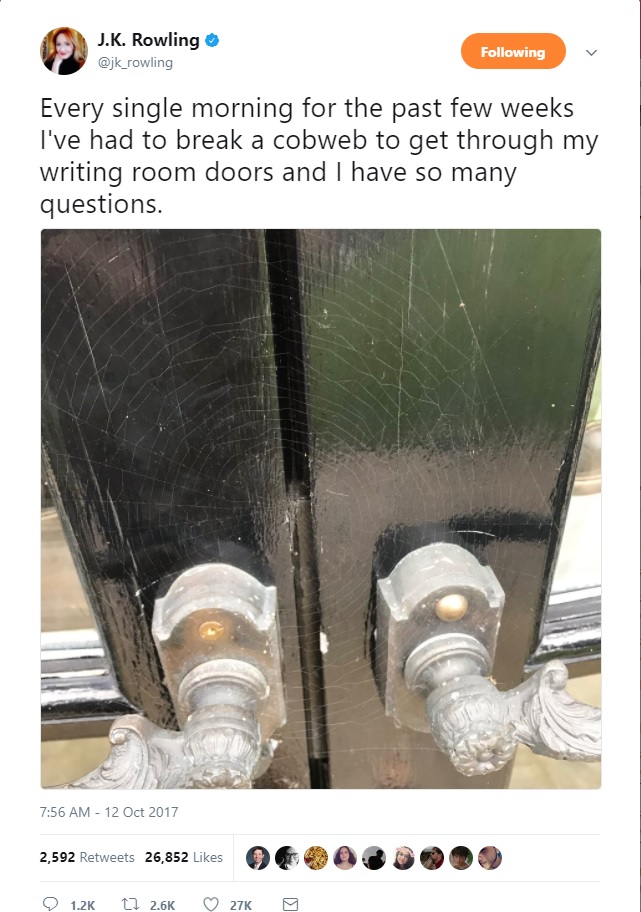 Fans commenting on the Edinburgh-based author’s post proposed the web was spun by one of Aragog’s descendants – the large human-eating arachnid from the Harry Potter novels – and that they were trying to leave her a message.

TV presenter Richard Osman pitched in, commenting: “At 6’7″ I break more cobwebs than anyone in Britain, and I feel guilty every time. All that work.”

Katie said: “He wants to be written about. He’s a plot spider.”

Michael Lucas added: “Seems like not all Aragog’s kids died after all.”

Gabe commented: “Maybe it’s just excited for Halloween and is trying to decorate.”

JK Rowling bought and then demolished the £1m mansion next door to her Edinburgh home in 2011.

She expanded the garden and built her writing room, described as reminiscent of Hagrid’s hut, but this is the first time the author has shared an image of it.

Reports have suggested that UK homes are set to be invaded by giant spiders this autumn, and it appears even the famous novelist is not immune.

It could be that Rowling is a victim of the invasion of spiders hitting UK homes this autumn, wiith as many as 150 million set to spawn.

Experts say the exceptionally warm summer produced more flies for the spiders to feed on.