MORRISONS have been accused of sexist pricing amid claims they charge women more than men for an almost identical shaving gel.

The supermarket price their own-brand 200ml shaving gel containing aloe vera and described as for sensitive skin at £1 for men – and £1.22 for women.

Angry consumers branded the price difference “silly” and insist the products are the same apart from colours of the cans, pink for women and blue for men.

The row comes three weeks after high-street chemist Superdrug were branded sexist for selling women’s pink razors that are up to 50% pricier than their orange male equivalents.

The pricing policy at Morrisons was exposed by Amy Ridgard when she visited the supermarket’s store Redditch, Worcestershire.

She snapped a picture of both products and posted a complaint to the store’s Facebook page.

Amy wrote: “Hi Morrisons. Shopping away this afternoon and needed some shave gel.

“Why do you charge more for the ladies version when it’s pretty much the same product?

Amy later added in the comments: “They’re the same. I got the men’s one, it’s cheaper.

“Just seems silly that because it’s in a pink can they charge more.”

Ashleigh Marie Cole posted: “I buy the blue one sometimes. I don’t look at what genitals I’m meant to have before buying shaving foam, or shower gel, shampoo etc. So far my genitals are fine with my stingy budget.” 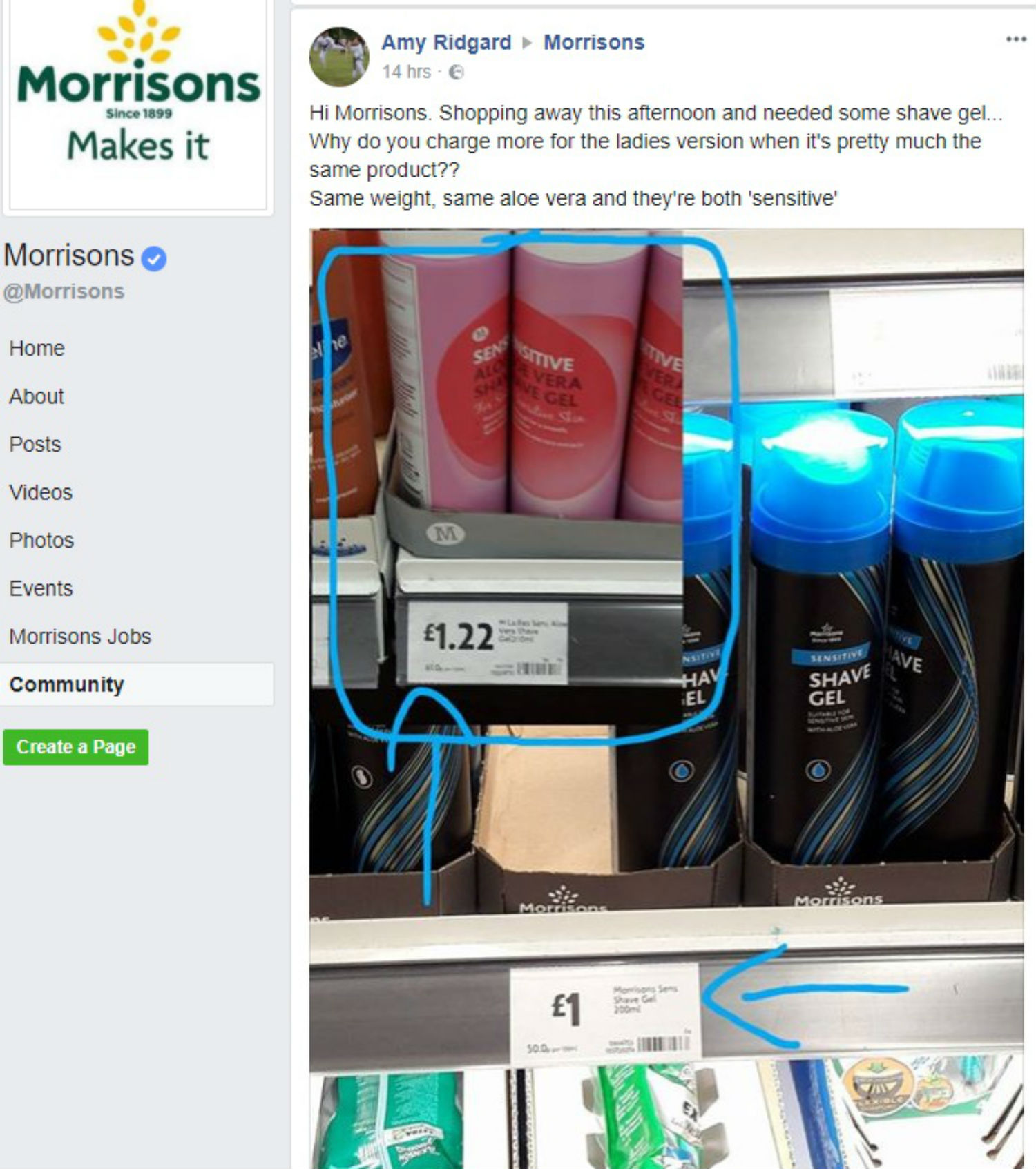 Bonnie Dyer added: “This is why I stopped buying it they all are the same. Shower gel and water does same thing.”

Tracy Ridgard commented: “Just use hair conditioner, I have no problem, leaves skin soft and you only need a small amount.”

While Robert John said: “Buy the men’s one then, they won’t stop you.”

Jo was outraged by the difference in pricing and slammed the high-street chemist for being sexist.

Superdrug said they were charged different prices by some suppliers and were challenging this practice on behalf of their customers.

In 2016 Boots were forced to cut prices on pink razors after the store was accused of over pricing on pink products directed at women. An investigation at the time claimed that Boots charged on average 37% more on products aimed at women.

Morrisons today denied they were charging more for an identical product. A spokeswoman for the firm insisted: “They’re different products with different formulations for different prices.”