A FED-UP driver spent his time waiting for a breakdown vehicle by recording a hilarious song about the misery of modern motoring.

Steven Youngson was forced to pull over on the M8 near Glasgow after his car broke down for the second time in four months.

Steven whipped out a brand-new ukulele he had just bought in the city and, against a background of deafening traffic, recorded an intensely bitter protest song against his own car.

Looking genuinely and thoroughly dejected, the 30-year-old from Wishaw, North Lanarkshire, sings: “I’ve broken down at the side of the motorway/I’m ok though cause I’ve got my new ukulele.

“There’s beasties around my feet/Don’t buy a Ford C-Max ’cause they are sheet.

“They breakdown all the f*****g time/To sell them must surely be some sort of crime.”

Steven, sitting beside the M8 with the offending vehicle in the background, carries on: “I hope the AA picks me up soon/Cause I’ve ran out of words for this f****** s***e tune.

“I cannae believe this happened to me again/I’m going to set this car on f****** fire when I get hame.” 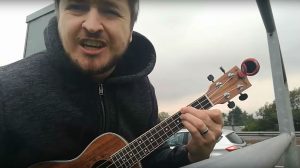 When he eventually got home, Steven posted the song to his YouTube channel with the title “I’ve broken down on the motorway”.

Steven, a youth worker, said today: “I was on the way home, pleased as punch with my new uke, when an engine management light came on telling me to pull over due to an engine malfunction.

“The reason I was as raging about it breaking down was a different engine management light came on four months ago when I was driving to Hull to get a boat to Europe for a family holiday.

“I’d phoned the AA and they said they would be about and hour. Where I’d stopped there was a couple of steps up to an electrical box and hand rail. I decided that I’d just get a shot of the uke to pass the time.

“I got it out the case and just started hitting a couple of chords and I was thinking ‘I’ve broke down on the motor way but at least I’ve get my ukulele’. 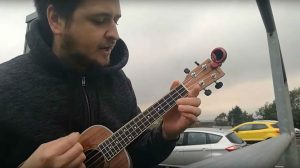 “So I started signing that and then seen all the snails and worms that were kicking about around my feet so that was that, I had the start of a song.

Setting his phone up on the hand, making sure his car was in shot, Steven began filming the short ditty.

He continued: “I knew what I was going to sing up until I said about running out of words.
“I just kept strumming and the last verse was basically just busked off the top of my head.”

Speaking about his broken down car, he added: “The car is about six years old. I know that cars start to deteriorate, and I do a lot of miles in it.

“It’s just frustrating when it happens so close to another break down. It’s a nice car to drive but once it’s fixed I’ll be trading it in.” 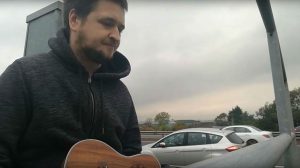 Commenting on the clip social media users have been left impressed by Steven’s song.
Marion Paterson said: “Busking on the M8, brilliant .”

Alexsing responded: “nice song and nice voice you have there!”