Cosmetic Team Are Sitting Pretty After a Decade of Growth 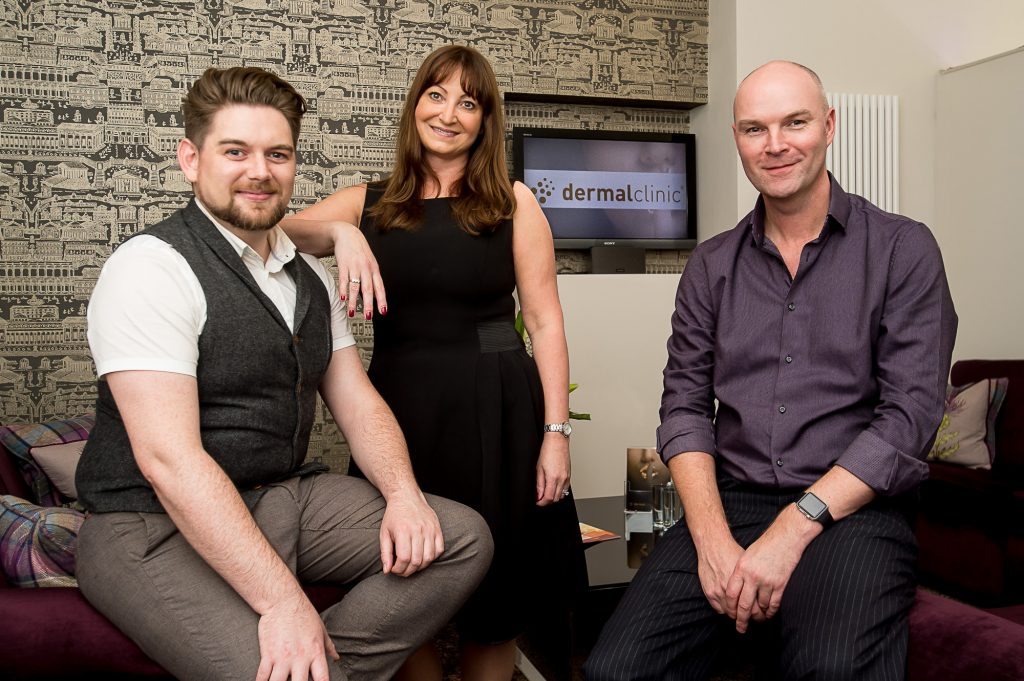 CHAMPIONS of responsible cosmetic treatment in Scotland have revealed strong financial growth – as they approach a landmark 10th anniversary.

In a year which saw Dermal Clinic become the first clinic in the country to register with Healthcare Improvement Scotland (HIS), it also recorded sales growth of 21%.

That marks a decade of annual, double digit growth, which the clinic put down to its hard-earned reputation as a flagbearer for best-practice in the cosmetic industry.

Jarrod Partridge, who runs the clinic in Morningside, Edinburgh, with wife Jackie, an accomplished cosmetic nurse and clinic founder, said: “This is a testament to our team – and to the power of doing things the right way.

“What’s even more pleasing is to get these figures just ahead of our 10th anniversary in November. Now we plan to celebrate that with some of the most loyal staff, customers and suppliers who’ve helped us with this achievement.”

The financial success has also been built on the introduction of innovative new treatments, often the first in Scotland, including a medically-led weight loss programme, a treatment for thin eyelashes, leading edge skin treatments and state-of-the-art tattoo removal lasers.

Further testament to the year of success was the fact that Dermal Clinic was shortlisted for five plaudits at the prestigious Scottish Medical Cosmetic Awards 2017, with another three shortlistings in The Look Awards 2017.

Jackie, who has collected numerous cosmetic nursing accolades, said: “It’s been a real year of success on multiple fronts, but for me the biggest success is that we continued to shine a light on the real and powerful benefits of ethical cosmetic treatments.

“Too often in the media there is a focus on botched treatments or people are turned off by so-called ‘trout pouts’ and the over exaggerated use of fillers and Botox. In fact, these are extremes and in no way represent what we do at Dermal Clinic.

“One of the keys to our financial performance is that we give people measured advice, treatments that are right for them and which deliver subtle-yet-effective results. We give our customers the confidence to feel comfortable in their own skins.”

Jackie says that Dermal Clinic’s message about responsible practice, tailored treatments and measured results has struck a chord with the people of Edinburgh. However, the core customers are professional women, aged from their 30s to 50s, who juggle families and careers, often while working in the city’s booming financial sector.

Jackie added: “There may once have been a sense that cosmetic treatments were showy or tacky. Now we are seeing increasing interest and demand from professional, well-educated women who want to look their best while remaining natural.”

Success has also been driven by the popularity of the medically-controlled Alevere weight loss programme, since Dermal Clinic is one of only three venues in Scotland which offers it. Alevere delivers lifechanging results akin to those associated with gastric bands, but without surgery and its associated risks.

In the past year Dermal Clinic also became the first in Scotland to partner with San Francisco-based health-tech pioneer Qardio, using its equipment to monitor Alevere patients remotely, helping them adopt and maintain good habits at home.

Dermal Clinic was also the first in Scotland to offer an eagerly-awaited treatment to restore thin or short eyelashes. The ‘LashClinic’ is a prescription treatment for hypotrichosis, approved in the US since 2008, which is now proving extremely popular with Scots.

Jackie, an influential spokeswoman for the British Association of Cosmetic Nurses, was headhunted to lead a Scottish Government-led introduction of new legislation which requires independent clinics providing cosmetic procedures such as Botox, dermal fillers, or laser eye surgery, to register with HIS.

She has also led calls for tighter regulation on backstreet and unqualified practitioners, particularly in regard to dermal filler and is a sought-after speaker at conferences across Europe, where she regularly gives facial injection demonstrations to plastic surgeons, dermatologists, nurses and dentists from all over the world.

Those rigorous standards and training have also been passed on to Dermal Clinic’s 10 staff, who provide a range of treatments covering plastic surgery consultations, weight loss, facial aesthetics and skin treatments.

Jarrod added: “Without a doubt our most important asset is our staff and we are seeing a clear return on investing in appointing high quality people to widen our services. We are well placed to continue our growth and to maintain our policy of recruiting talented, locally-based people.”

In January, Dermal Clinic announced a partnership with Changing Faces as its chosen charity for 2017. The charity helps people with a disfigurement find a way to live the life they want. Its programmes offer specially-trained practitioners at children’s hospitals in Edinburgh and Glasgow to provide a skin camouflage service to show people how to use specialist products to conceal birthmarks, scarring and other skin conditions.