DRAMATIC photos have captured the incredible “once in a life time” moment a huge golden eagle swoops down and tries to pick up a red deer fawn.

Taken last month on the scenic Isle of Mull on the west coast of Scotland, the stunning photos show the huge eagle grabbing the calf by the head as it tries to run away.

Incredibly, the young deer manages to escape from away from the vice-like talons of the raptor and continues run away with its mother.

The remarkable images were shot by amateur wildlife photographer Dawid Banasiak while on a nature tour.

Nature Scotland, a wildlife tour operator on the island where Mr Banasiak was a guest, said it was a “once in a lifetime encounter.”

Golden eagles are well known for their ambitious attacks on potential prey, with reports of the bird attacking bears and coyotes elsewhere in the world.

The stunning images show the eagle with its talons trying to grip the young deers head as it flees down a hillside.

Running towards its mother, the youngster wriggles free but the raptor continues to chase the pair, flying less than two metres above.

Eventually the eagle gives up the chase and flies off, leaving the mother and calf alone.

Speaking about the rare encounter, railway worker Mr Banasiak, from Poland, said: “I noticed the golden eagle rising above the peaks and descending in the thermal currents.

“I thought I was finally being rewarded for my patience and all the hard work of the expedition. 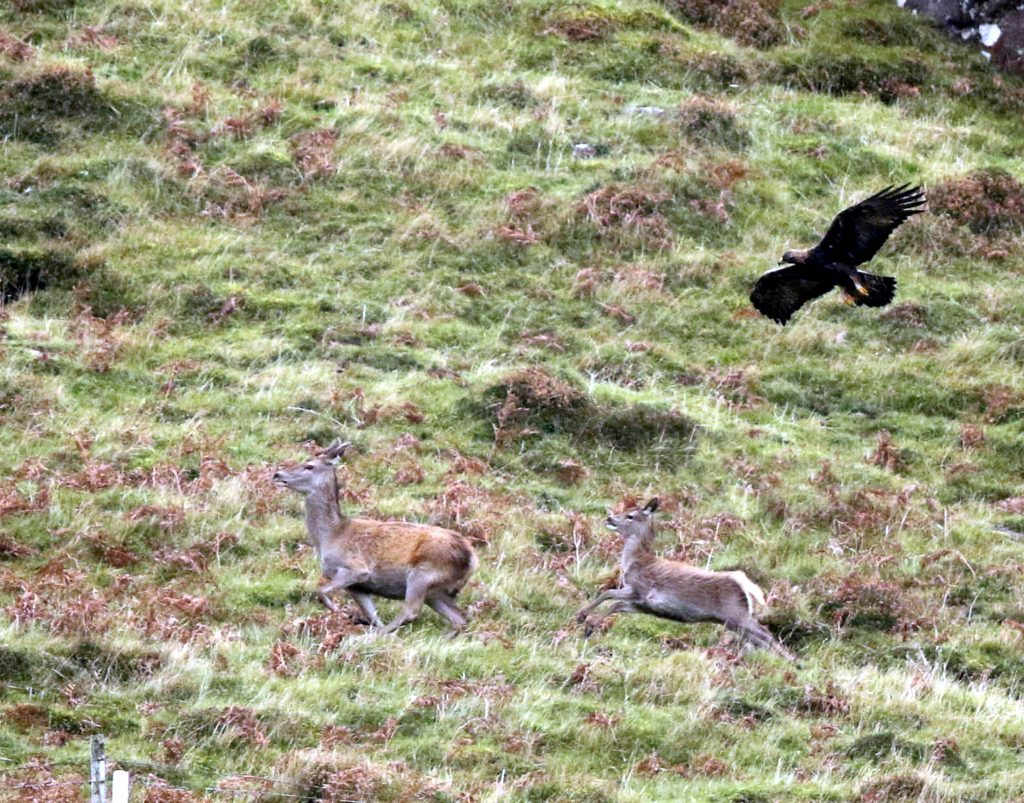 “He was flying low to the ground and very far away from my lens. Just a few seconds after I realised there was something else on the slope with the eagle – a group of deer along with a young red deer calf.

“The eagle was trying to separate it from the herd and I must admit that he was very good.

“He drew closer and closer every second to the deer calf’s head. The eagle got even closer and clawed his talons around its head.

“I was thinking it was the end, but the brave deer was able to save itself. It must have been very frustrating for the eagle

“I was still there for a few moments and I could not leave the admiration of what I was witnessing.”

Nature Scotland said: “A ‘once in a lifetime’ encounter on yesterdays Mull Wildlife Tour…

In 2013 a golden eagle was photographed attacking a deer by zoologists at a nature reserve the remote Lazovsky region of southeast Russia.

The jaw-dropping images showed the plucky bird attacking then attempting to pick up the animal several times its own size.

At the time, experts believed it was the first documented attack on a deer.