A FAKE Glasgow City Council page has duped thousands of people into believing the Christmas lights switch-on has been cancelled.

The parody page said they had received complaints and that Christmas was perceived as “offensive to some cultures” and apologised for any offence caused by the lights.

The post now has over 1,700 likes and 3,000 comments since it was posted yesterday (THU) evening.

Glasgow City Cooncil uploaded a picture of the George Square lights, with a large red cross plastered across the front of it and the words: “No Christmas lights Glasgow 2017.”

The page posted the picture with the caption: “Due to the amount of complaints we have received, Glasgow City Council will NOT be going ahead with the annual switch on of the lights, due to take place on the 19th of this month.

“We take on board the complaints we have received, and understand that Christmas can be perceived as offensive to some cultures, therefore we will NOT be having the annual Christmas lights in George Square this year.

“We embrace multiculturalism here in Glasgow, and apologise for any offence caused with the Christmas lights. However all our Christmas draws will still go ahead. Like and share this post to inform anyone attending that the George Square annual switch on is now CANCELLED.”

Many social media users fell for the parody pages prank, and took to the comments section to share their outrage.

Betty Mcbride said: “Please tell me this is not true. We’ve had George square lights turn on for years, we always accept the cultures of other nations please let them accept ours.”

Karen McGuinness added: “I think this is appalling. I am Scottish and my family goes back generations. I have rights too I can’t believe my Scotland can’t stand up and be counted.”

William Kane commented: “Nothing to do with culture, they are just using it as an excuse to save cash.”

Georgina Baxter said: “I hope this is a joke. If not it’s a disgrace. Our country, our traditions. If you don’t like it too bad.”

Michelle Duffy wrote: “That is an absolute disgrace we live in a Christian country and Christmas is a Christian festival and should not offend anyone.” 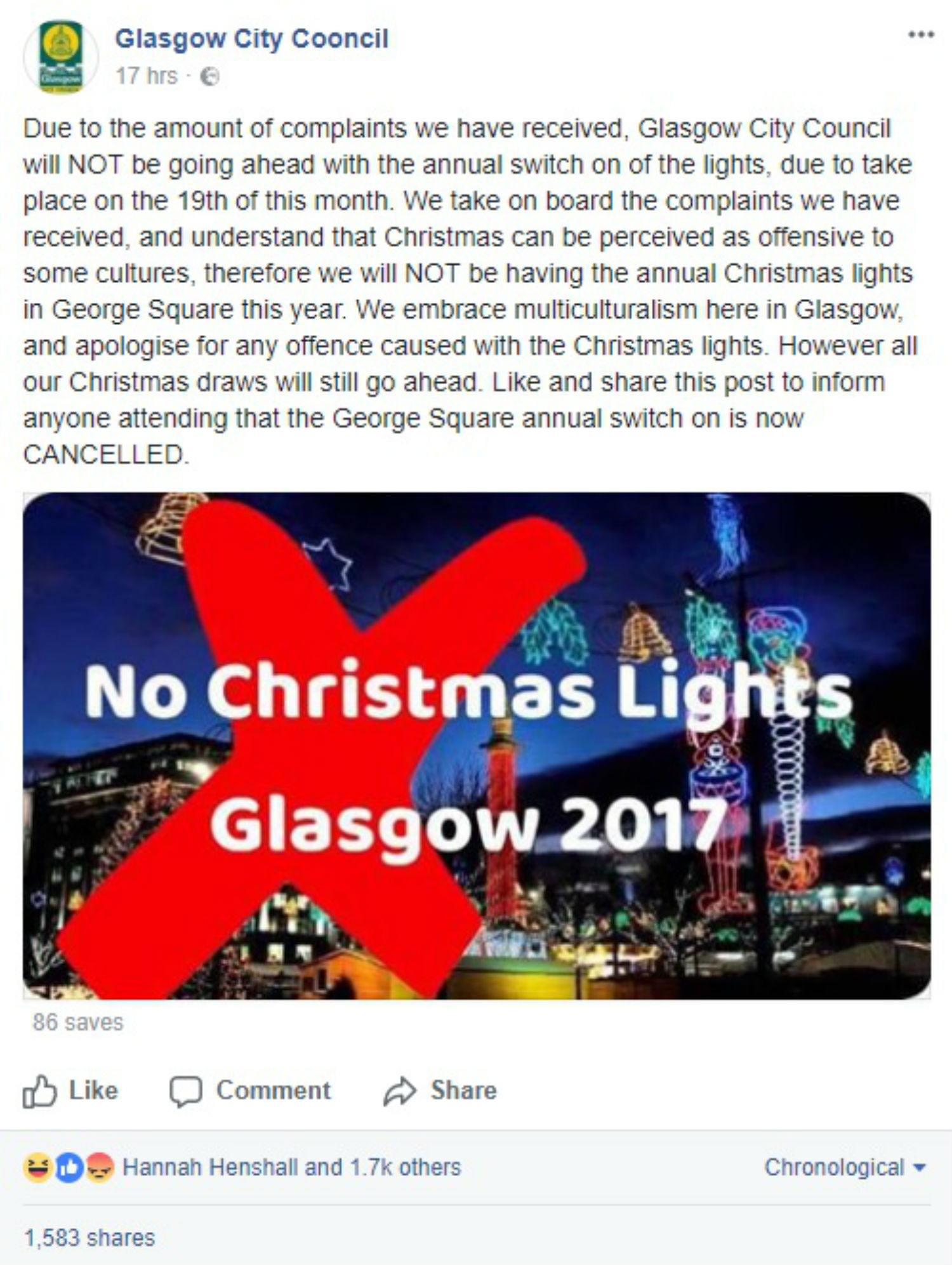 However, others weren’t as easily hoodwinked.

Steven Hedley pointed out: “Do people really believe this? Look at the way Council is spelled you morons?”

Jim Hamilton said: “I hope no one is falling for this because it’s bulls**t.”

Rebecca Nunn commented: “Lmao the amount of fandans who think this is a real council page. Absolutely belting.”

Jason Allan added: “Oh my God man people are genuinely going off on one thinking that Glasgow City Cooncil is real.”