A STOWAWAY sparked terrorism panic on an Easyjet flight after he snuck aboard the jet and locked himself in a toilet.

The 25-year-old Swiss man missed his flight from Gatwick and was so desperate to get to Geneva he refused to come out of the loo when discovered.

Some passengers, fearing the incident could be terror-related, wanted to leave the aircraft and were only placated when police were called to search the A320.

The stowaway was arrested but released without charge and the passengers eventually arrived at their destination in the early hours of Monday, six hours late.

The incident has sparked concern among passengers about the security arrangements at Gatwick as the passenger got on board the jet using the invalid boarding pass from his missed flight. Easyjet said they were investigating the apparent security breach.

The drama unfolded on the EZS8484 8.20pm service after staff spotted the “in use” toilet light was on despite all passengers being seated.

The man refused to come out of the toilet for around 40 minutes but was eventually persuaded to leave the jet. Startled passengers reported seeing the man escorted from the aircraft by staff.

One passenger, Sophie Martin, said: “At 20.20 everyone was on board the plane and we were preparing to depart – the pilot announced that due to weather issues in Geneva we would be slightly delayed – understandable. 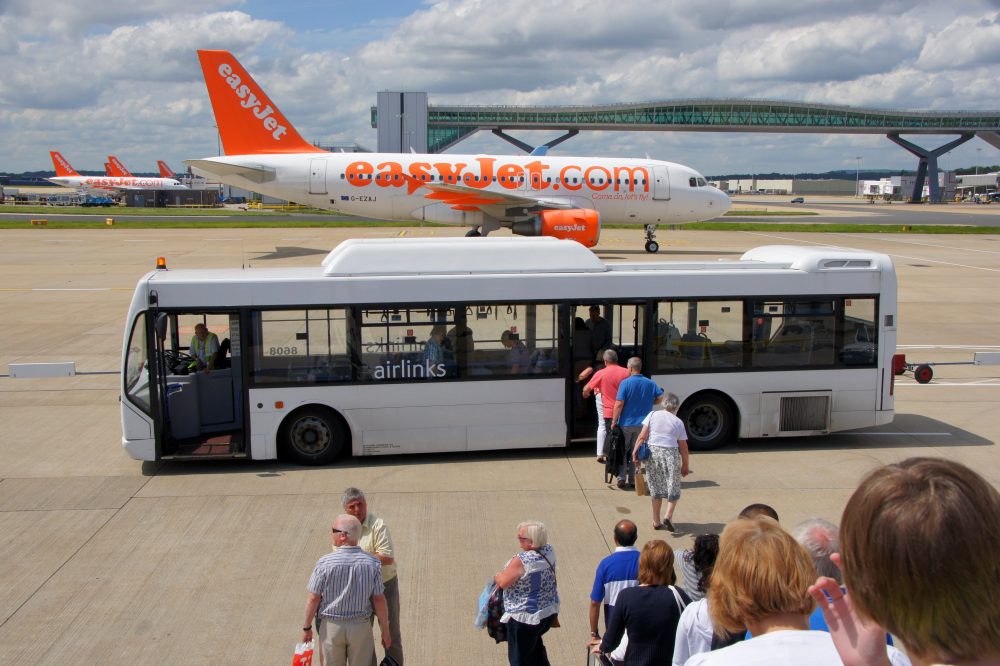 “However, it soon became clear that something was wrong.

“The air hostesses made an announcement asking anyone who was not on our flight to come forward. Cue the look of confusion on everyone’s faces.

“There seemed to be a lot of commotion at the front and back of the plane and the air hostesses started going through the overhead compartments.

“Suddenly a man walked up the aisle, escorted by an air hostess and left the plane. By this point it was almost 21.00.”

Sophie added: “An announcement was then made by the pilot. Many passengers wanted to disembark the aircraft because they were concerned about safety issues.

“It soon became clear that the man they escorted off the plane had a ‘suspicious’ ticket, so naturally all passengers were incredibly concerned.

“There was a lot of commotion at the front and the back as passengers started to panic. Many people approached the air hostesses to voice their concerns.

“Eventually the pilot made another announcement. He had called the police to come and do a security check to put everyone at ease and to try to prevent passengers from disembarking.”

Sophie said officers showed up 20 minutes later and went up and down the aisles checking.
She said a policeman then went on the intercom to explain.

Sophie said: “A man who was meant to fly earlier that day, had managed to board our plane and had locked himself in the toilet and refused to leave.

“Now this poses many questions here, especially about security in this day and age with everything that is going on the world.

“How on earth did Easyjet allow this man to get on board the plane?

“It really makes you question the levels of security you have at the gate if someone can get past your system with an incorrect ticket.

“In this instance it was just a man who was desperate to get to Geneva, but what if it had been something more sinister?”

Another passenger, Ayala Sela, took to Twitter to share her concerns, writing: “Hey Easyjet, you know how you let someone onto the plane to Geneva last night even though it wasn’t his flight, then just let people panic about terrorism, then had to land in Lyon and wait to two hours for a bus? Fun!

A spokesman for the airline today said: “EasyJet can confirm that on 12 November a flight from London Gatwick to Geneva was met by the police due to a passenger who incorrectly boarded the aircraft.

“The crew correctly identified the passenger should not be onboard and immediately reported it to the police.

“We have taken this up with London Gatwick airport and an investigation has been launched.

“Easyjet works closely with all of our airports to ensure the safety and security of all passengers and staff.

“The safety and well-being of our passengers and crew is always Easyjet’s number one priority.”

A spokesman for Sussex Police said: “A man was arrested after trying to stowaway on a flight to Switzerland from Gatwick on Sunday evening November 12.

“Police were called to the stand in the airport’s North Terminal at 9.42pm where the man had been removed from an easyJet flight from Gatwick to Geneva.

“He had boarded the aircraft without a valid boarding pass and had been removed by staff.

“A 25-year-old man, a Swiss national, was arrested on suspicion of secreting himself for the purpose of being carried in an aircraft without consent. He was later released without charge.”

A spokesman for Gatwick Airport initially declined to provide an official comment when asked how the man managed to get through security without a valid boarding pass.

However, another spokeswoman for the airport later revealed: “The man had a ticket to the same destination but for the earlier flight so he was let through security with his boarding pass and passport earlier that day.

“He’s subsequently missed the flight for whatever reason and stayed in the departure area or nearby and then managed to get on the next flight.”