AMAZON have been accused of ruining Christmas by sending out presents in their original packaging.

The firm has been hit by numerous complaints about over-packaging in recent years but their response has got customers even more angry.

Across the country, Christmas “surprises” have been arriving on doorsteps in their manufacturers’ original boxes with a simple shipping sticker attached.

Amazon UK’s Facebook page has been inundated with complaints in recent days.

Charlie Gemmell, from East Kilbride, South Lanarkshire, posted a picture of a ‘Mega Mastadon’ toy which she had delivered for her son. When he saw it she had to admit to him that Santa wasn’t real. 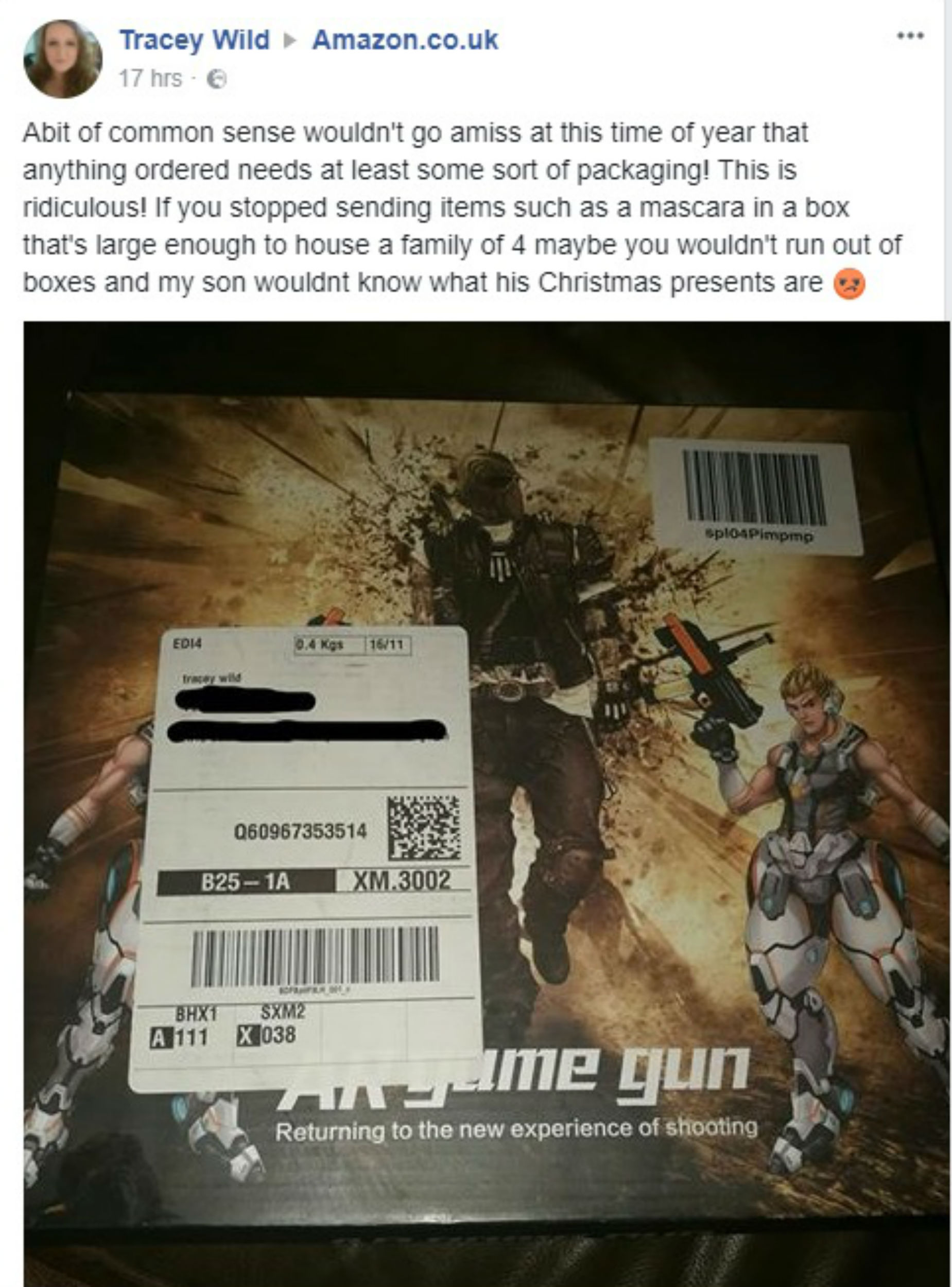 She said: “So Amazon thanks sooo much for ruining the whole Santa experience for my six year old son who dutifully wrote out his Santa letter determined to get a mega mastodon.
“I ordered it from you and you delivered it. Like this. No packaging, which is surprising since you always over pack everything.

“My son opened the door this afternoon thinking it was his wee friends coming out to play and saw this. No way I could lie my way out of this one. I’m so disappointed Amazon.
“You have ruined my last Christmas with my eldest son. I hope no one else experiences this.”

Gavin Belton-Rose, from Wrexham, Clwyd, said: “Thank you Amazon, you have spoilt a surprise gift for my wife, by delivering her it un box and just slapped a shipping sticker on the side of it… take a bow.

“I have spent hundreds/ thousands of pounds with you over the years and this is the thanks. And how you repay me for the inconvenience with a £4 refund. What an insult.” 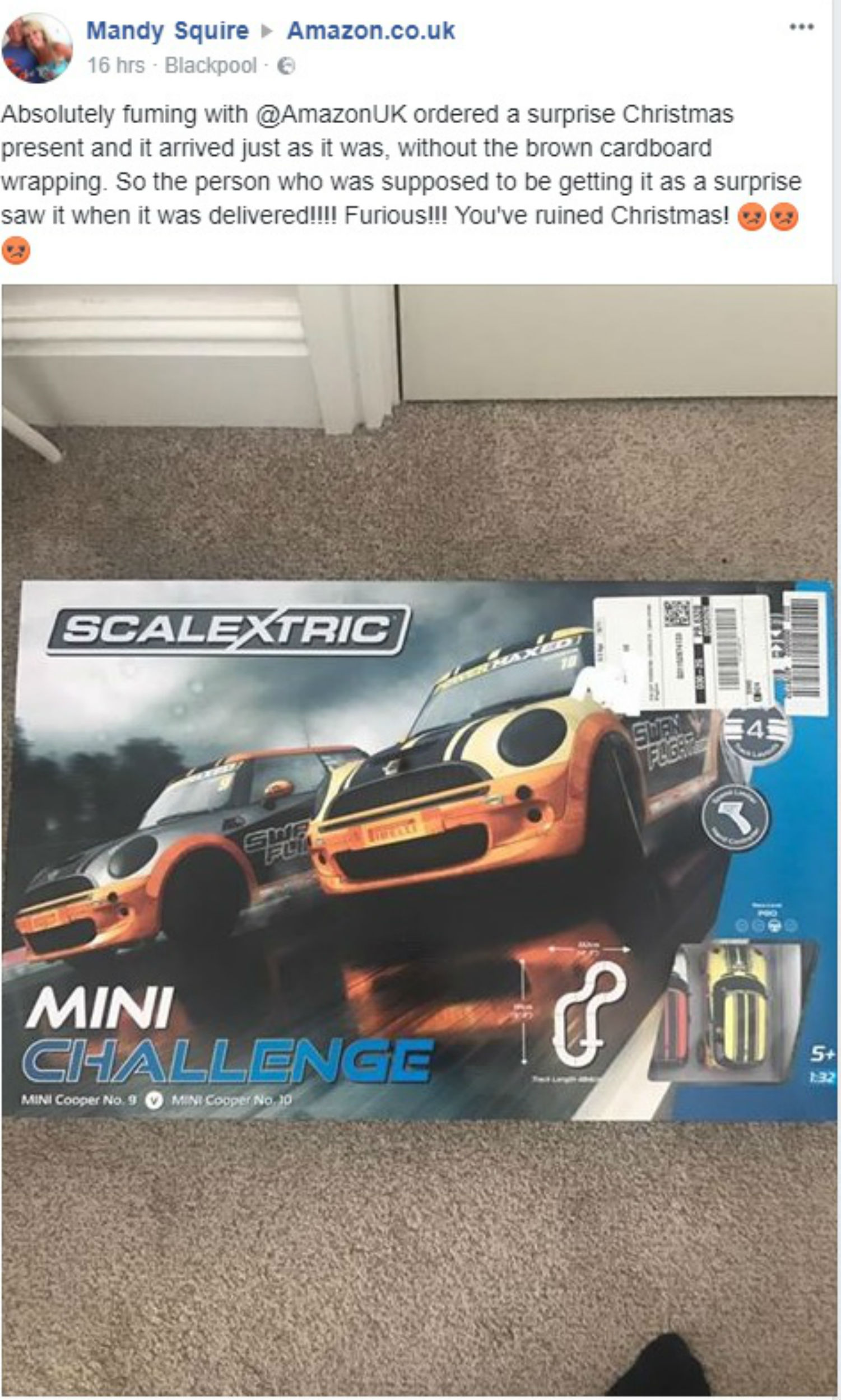 Mandy Squire, from Blackpool, received an uncovered Scalextric set and said: “Absolutely fuming with @AmazonUK. Ordered a surprise Christmas present and it arrived just as it was, without the brown cardboard wrapping.

“So the person who was supposed to be getting it as a surprise saw it when it was delivered. Furious. You’ve ruined Christmas.”

Tracey Wild, from Glossop, Derbyshire, wrote about her son’s ‘AR game gun’: “A bit of common sense wouldn’t go amiss at this time of year that anything ordered needs at least some sort of packaging.

“This is ridiculous. If you stopped sending items such as a mascara in a box that’s large enough to house a family of four maybe you wouldn’t run out of boxes and my son wouldn’t know what his Christmas presents are.”

Paula Napier, from Kinross, Perthshire, managed to avoid her kids seeing the presents, but said: “I know you are often criticised for too much packaging, but come on Amazon.

“Surely at Christmas time it would have been appropriate to even have wrapped this in brown paper rather than just sticking the mailing label to the outside of the actual box.
“Luckily I’m not having to explain why Santa needs Amazon’s help.”

And a ‘horrified’ Kirsty Morris said that her kids’ belief in Santa was threatened when her son saw his sister’s gift.

She raged: “Horrified today that your delivery driver left my daughter’s Santa present – Barbie townhouse – on our doorstep when we were out.

“It wasn’t even in brown packaging, just a Barbie box. Fortunately my husband noticed when we drove home and drove to the end of our road so I could nip out and intercept it but my son saw it. 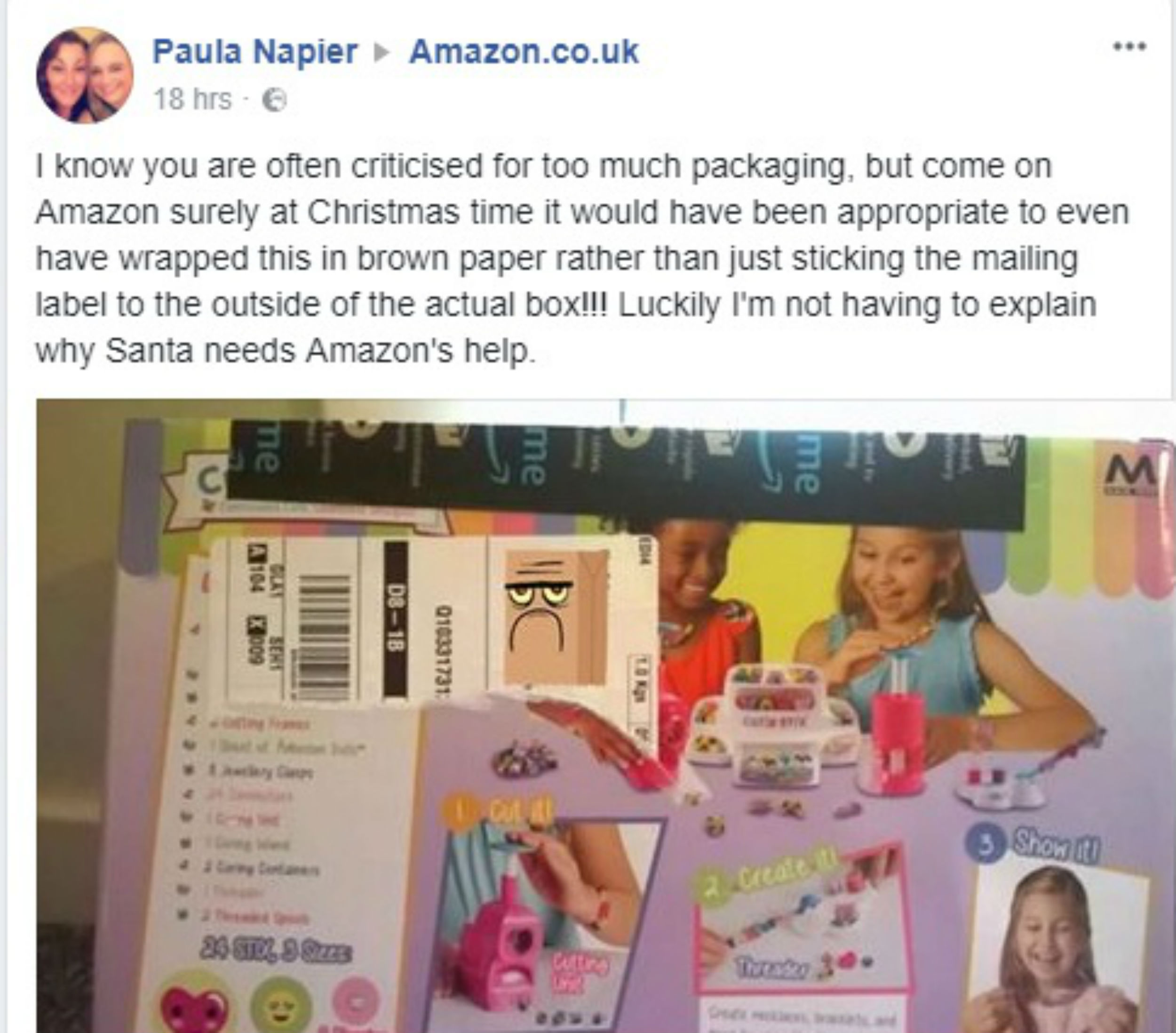 “My kids very much believe in Santa but this was almost ruined today. Surely your drivers are meant to get a signature too.”

Amazon responded to each of the posts individually with an explanation that they were trying to cut down on packaging.

One of the responses read: “I’m so very sorry that your surprise was ruined. We try to minimise the amount of packaging materials we use as much as possible.

“For future orders, you can keep the contents of your package a surprise by selecting the gift option during checkout, or you may mark ‘Ship in Amazon box’ on the checkout page if you don’t wish to reveal the contents.” 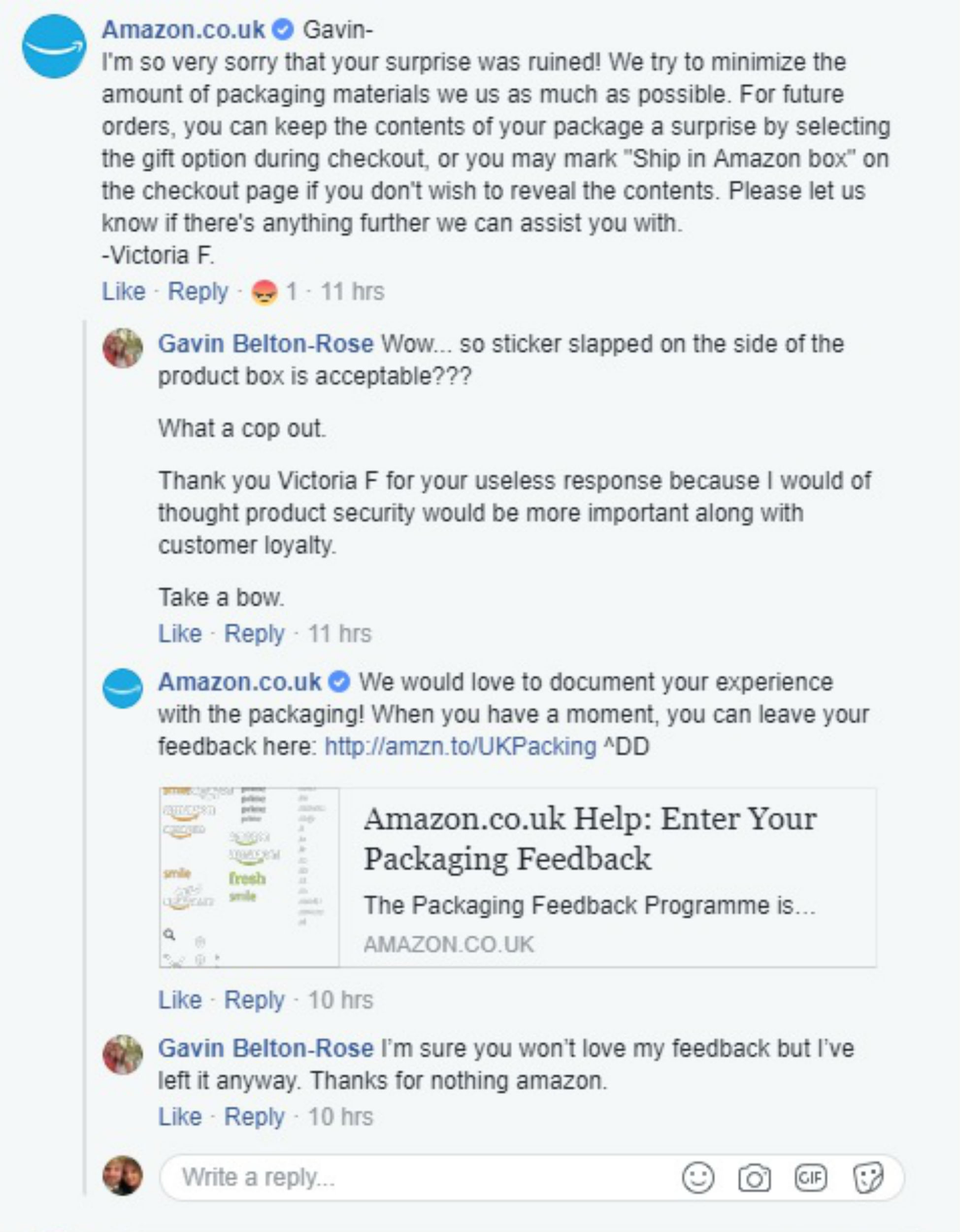 A spokesman for Amazon said: “We would need more details on the customer accounts to be certain, but having reviewed the images, we believe they were dispatched and sold by Amazon in Frustration Free Packaging.

“Items ordered under Frustration Free Packaging have an option to cover the item contents with an Amazon box. This is made clear on the product page and during the checkout.”

It comes after Amazon received flak for over-packaging the products they send out.
One example is Jenny Canham, who said: “Amazon, you are a disgrace. The world is drowning in packaging. Two A5 jiffy bags plus a 4x4x12 inch box, all for two print cartridges.”

They were also recently criticised for “killing christmas” when an advert showed a parent hiding amazon boxes from his children, implying that Santa isn’t real.