VIRGIN trains have promised to investigate after a partially-sighted man travelling with a guide dog was forced to sit on the floor for two-and-a-half hours.

Roger Debman claims train staff allowed able-bodied passengers to sit in seats reserved for the disabled. He alleges a conductor pointed to the floor and instructed him to “sit there”.

A shocking picture shows the 56-year-old sat on the floor of the York to Peterborough train with his dog, Nevin.

A furious Mr Debman complained about his experience last Friday: “It’s close to fraud. I’ve had two heart attacks, a stroke, I have a pacemaker – and I’ve to sit on the floor?”

The former businessman from Liverpool needs to use seating designed for the disabled because it provides enough space to keep his dog out of the aisle.

He booked the journey in advance for himself and his wife, Debra, but says Virgin gave him no option to reserve a disabled seat.

He said today: “My wife asked the conductor and he told us there was no seats and to just ‘sit there’. The conductor told me to sit where I was.

“I can’t do the conductor’s job for him but the bottom line is it says disabled seats and if a disabled person gets on you should give up your seat up.

“Passengers were ignoring me, happy-as-larry. You just get used to it. It shows the ignorance that’s about towards disabled people. 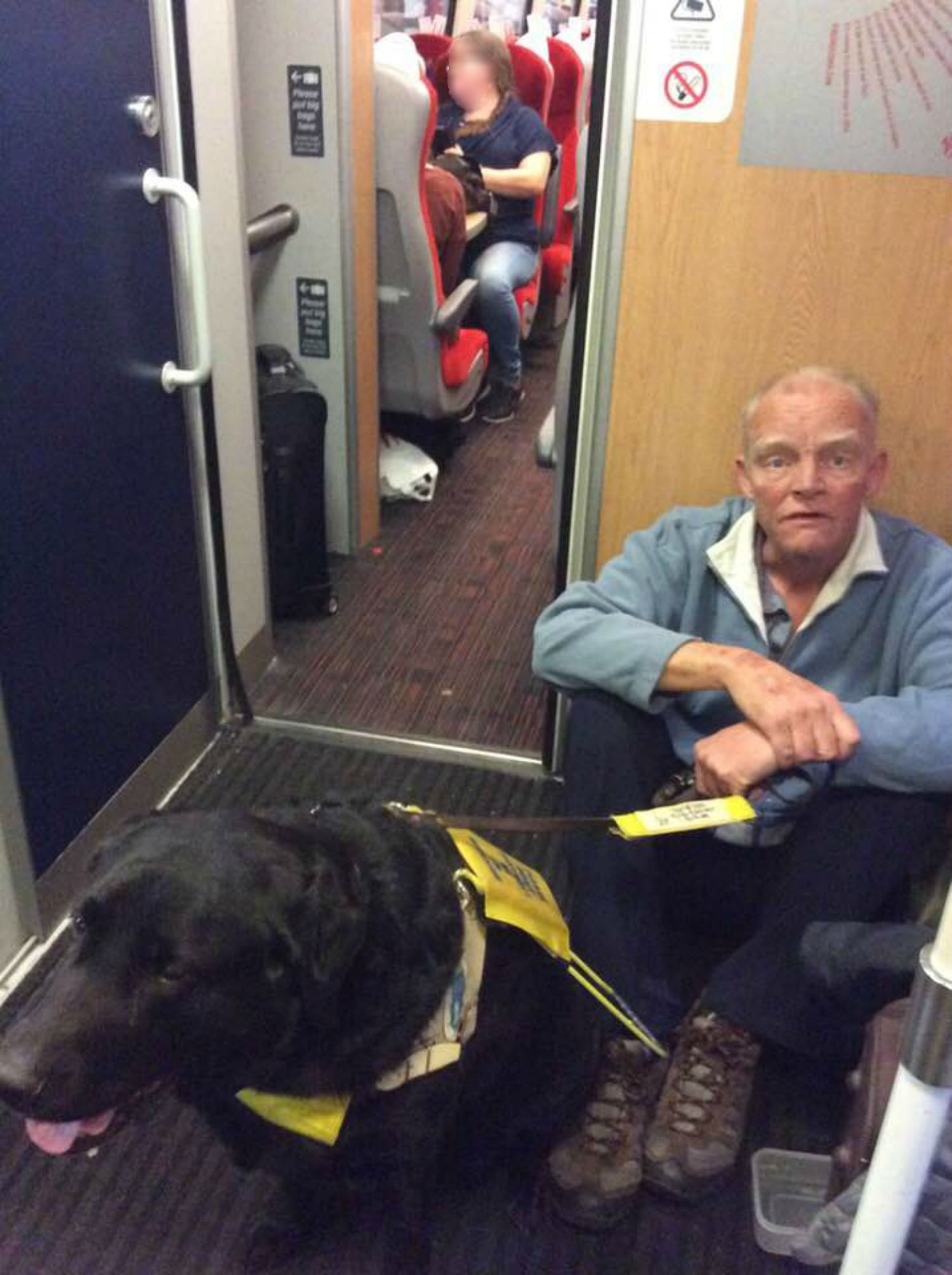 “It’s a joke. It happens regularly. I’ve had to sit on the floor before. I’m used to it. When I was brought up I was told to get up and give my seat to someone who needed it. Nowadays people don’t do it. Very few people will get up for you.”

Debra, who is Roger’s carer, as well as being a nurse at the Royal Liverpool University Hospital, said: “As soon as we got on the conductor said the train’s full. He came back to say there isn’t anywhere to go.

“He said he could get a seat for me but I’m Roger’s carer so I obviously couldn’t leave him.

“No thought has gone into the facilities needed. There’s nowhere to go. If you’ve got a push bike you’re all right.”

Roger posted about his experience on Facebook: “This is how Richard Branson transports registered blind people and guide dogs on his trains.

“Forced to sit on the floor because the guard would not clear the suitable seating. If you think this is wrong please share this so Mr Branson gets the message.”

Janet Russell responded: “Sorry it’s not Branson…. but selfish b*****s that wouldn’t move their fat asses out of the designated seats.”

Greg Wrench posted: “Disgusting way to treat a person, I am disabled unable to stand and I often find I am unable to sit in the priority seating for disabled because people who are able bodied will not give it up when asked.”

Pat De Roeck commented: “That is bloody disgusting and I can’t believe anyone of those passengers didn’t help that man and his dog get a seat shame on then and as for Richard Branson well words fail me!!!”

Roger and his wife were travelling from Liverpool to Peterborough to celebrate his sister’s birthday.

On his return trip, this time with London Midland, he was again unable to find an available disabled seat because they were occupied by able-bodied passengers.

He used a regular seat meaning Nevin had to sit in the aisle resulting in complaints from other passengers.

“He had to lay in the aisle,” said Roger. “With looks of disgust because users had to climb over him some even tutted as they climbed over.”

Virgin Trains said: “Thousands of passengers with disabilities travel with us every year and 94% of those using our Journey Care assistance programme are pleased with the helpfulness of our staff.

“We’re extremely concerned to read Mr Debman’s account of his experience and would encourage him to get in touch so we can investigate what happened.”

A spokesman for London Midland said: “We have priority seating on these trains, so if he had used our free assistance service we could easily have accommodated Mr Debman and Nevin.”