SCOTRAIL have been forced to lift their ban on passengers’ reusable coffee cups following years of complaints from customers.

From Monday, travellers will be able to take their own mugs on board and get them filled up from the trolley.

Previously, customers had to use the firm’s throwaway paper cups if they wanted to buy a ScotRail beverage.

The climbdown will delight many green-minded customers who claimed the company’s policy was bad for the environment.

The only drawback is that travellers will have to equip themselves with a mug holding precisely 12oz or 340ml so that they fit the cup holder on the catering trolley.

ScotRail claim the ban was put in place for health and safety reasons due to staff getting burnt whilst filling up commuters’ cups. 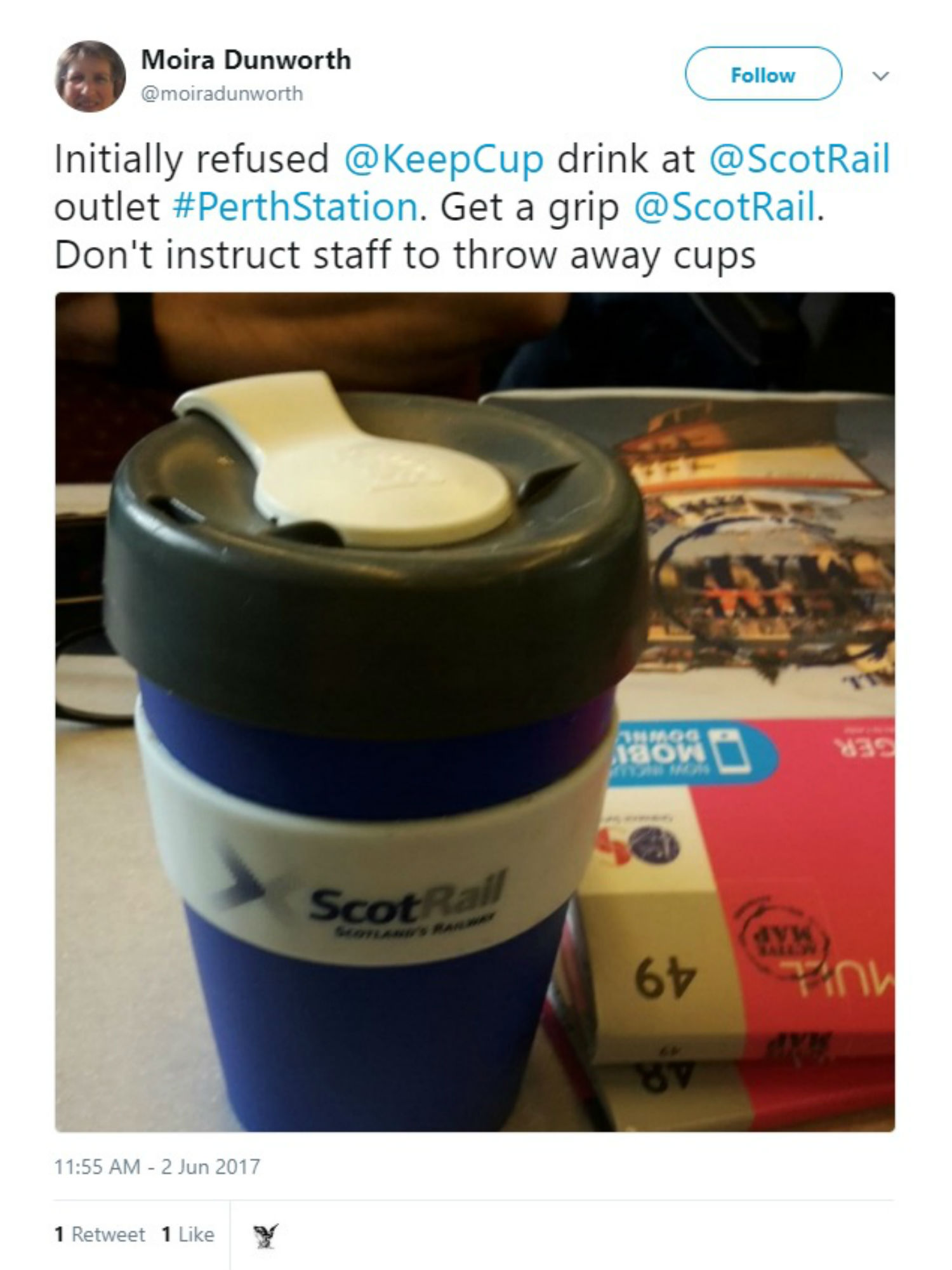 Among those to have complained in recent months was Guy Doza who posted a selfie with his re-usable cup writing: “Disappointed ScotRail won’t let me use my keep-cup and only offer non-recyclable disposable cups #coffee #recycle #ecofriendly #environment.”

Twitter user @violatricky wrote: “ScotRail, why won’t you allow people to use their own lidded cups for coffee?

“Waste of paper cups which can’t be recycled. Please fix this.

Sophie Bridger posted: “Bizarrely, ScotRail trains are only place that don’t allow me to use a reusable coffee cup. Why so out of step with rest of the country?”

A ScotRail Alliance spokesman today (FRI) said: “The safety of our people and our passengers always comes first – it’s easy to forget that pouring boiling hot liquid on a moving train can be quite dangerous.

“Since the introduction of our new system, burns and injuries have gone down to virtually zero.

“We’re pleased to say that we will be accepting re-usable cups from Monday, now that we’re confident that they can be used safely with our catering trolleys.”

According to the most recent statistics, the UK throws away around three billion disposable cups a year.

Many cups used in high street coffee chains can’t be recycled due to only a small number of specialist plants being able to recycle the polyethylene used to keep them waterproof.

He said: “It is welcome news that ScotRail will now let people use their own cups for tea and coffee on all their trains.

“Disposable cups are often extremely difficult to recycle and commuters will be pleased that they can finally bring their own cups and cut down on unnecessary waste.

“In the UK we get through more than 2.5 billion disposable cups a year, making them one of the most visible signs of our incredibly wasteful society.

“If combined with a reduced price for bringing your own cup – as offered in many coffee shops – this could really help reduce the amount of rubbish generated on trains.

“Catching the train, particularly the new electric ones, is far better for the environment than taking the car so allowing people to reuse cups is another step in cutting our emissions and stopping waste.”