RUGBY legend John Beattie has complained to the police after he was pelted with eggs by a yob in a car while cycling.

Beattie was attacked as he commuted between his BBC Radio Scotland job in central Glasgow to his home in the city.

The 60-year-old told his Twitter followers yesterday afternoon: “I’ve got the car make, the colour, the reg number, and the stuff the passenger covered me with when I cycled home. Mmmmm what to do, what to do.”

Beattie, who won 25 caps for Scotland during a glittering career, was urged by his followers to call the police.

John Templeton said: “Police Scotland big chap. Then perhaps a wee discussion on the show tomorrow. I have given up cycling in Glasgow now, fed up being every clowns ashtray or fast food bin.”

Deacon Blue star and TV personality Dougie Vipond said: “No choice John, you’ve got to report it. Luckily you were able to control your bike when it happened, others aren’t so lucky. Hope you are ok by the way.”

Another fan said: “Eggs are serious – a friend of mine got hit in the eye and lost most of his vision – dangerous.”

Beattie went back to the spot and discovered that it had been eggs that had been launched at him.

He posted a video in which he said: “I was cycling home today quite near my house and I was hit with something. I thought it was something serious but it’s eggs, look.

The camera then pans to the the cracked shells and the insides splatted over the pavement.

He adds: “Silver Astra I have your regi number, we meet again someday I think.”

Speaking today (TUES), John said: “I was a wee bit unsteady, I got angry and chased them a bit but I couldn’t catch them.

“I had a shower and went back and there were two or three eggs at least. One had hit me and the others had shot past me.

“There was a bit of yelping and laughing but I didn’t see anybody.”

Beattie revealed that after a bit of deliberation he decided it was best to report it to police.

“I’ve reported it. I contacted people on Twitter and there was one who had a friend who had been blinded. And there was taxi drivers saying they get it alot. So I thought I better report it.

“I don’t know what they’ll be able to do because no-one has been identified, they’ve only got the car reg and there’s no second witness.

“But I’ve reported it so that it’s a statistic of a cyclist being hit by eggs”, he said. 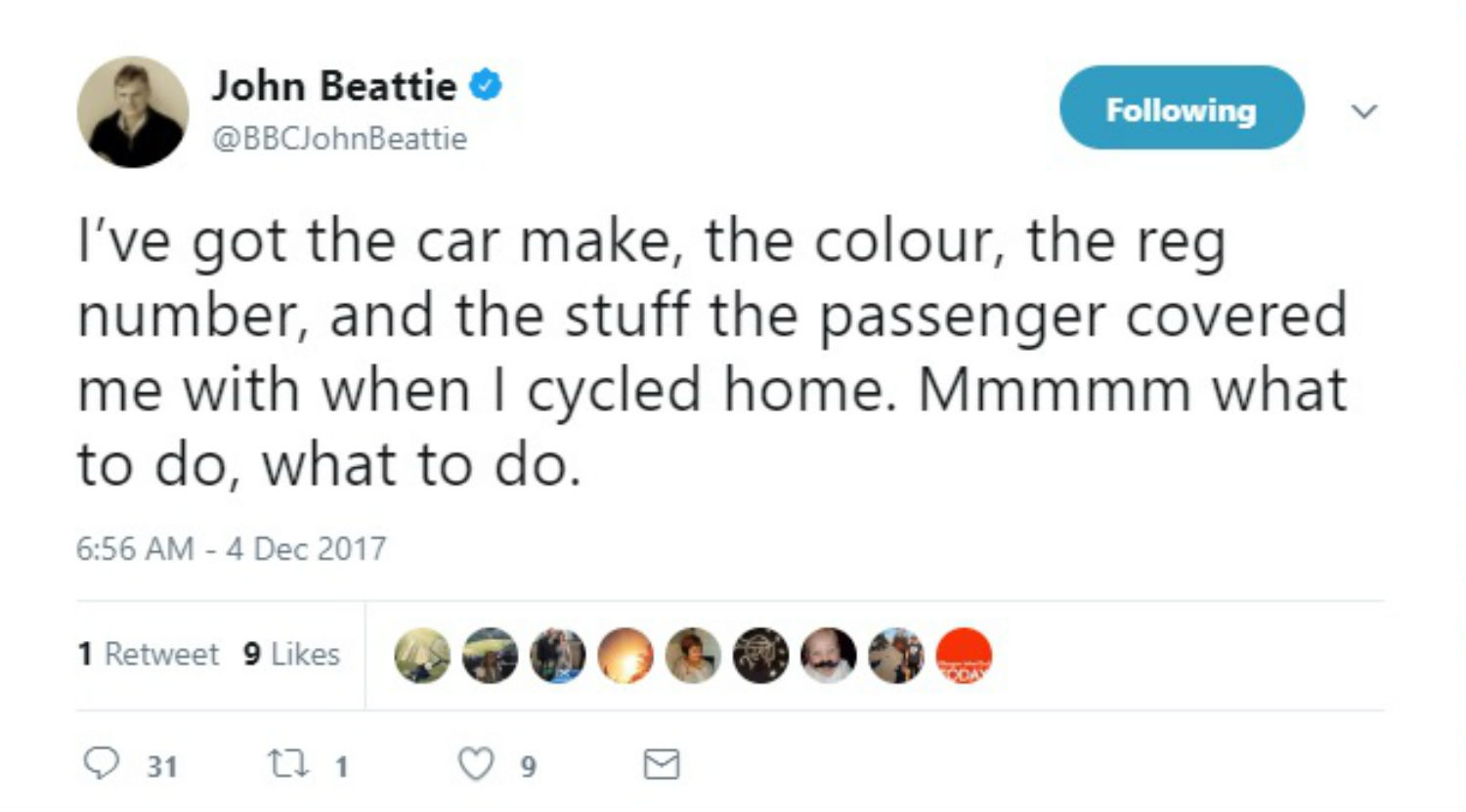 The broadcaster cycles to work every day and says he has never had any other issues on the road.

“Most drivers are great,” he added.

“They let you in, they wave you in. Taxi drivers, delivery drivers, they are all brilliant.

“My commute has been a non-event until this. But it’s one really random event.

“I believe in peace in the roads, most people are brilliant.”