AN HGV driver has been condemned for staying on the motorway despite his vehicle swaying in high winds before shedding part of its load.

A terrifying video shows the heavily-laden lorry swing from side-to-side and even switch into the middle lane as the man filming says: “He’s overtaking – f*** me!”

At one point the rear wheels leave the road surface and even when part of the load of timber falls over the side of the lorry, the driver continues along the hard shoulder for a considerable distance before stopping.

The dramatic footage was caught on camera by Antony Rhodes on the M62 near Hull, East Yorkshire, on Thursday last week as Storm Caroline battered the country.

The clip has attracted more than 160,000 views and hundreds of shares and comments.

At the start of the footage, Antony from Bradford, West Yorkshire, is seen following behind the artic lorry.

As the HGV sways and almost tips over in the wind, the rear wheels of the trailer can be seen lifting off the road.

A man can be heard saying in the film: “Wow, he’s going, he’s going over. He’s losing his load there.”

Remarkably the lorry then begins to overtake another HGV travelling in-front as the load of timber and wood continues to move around on the trailer.

The clip cuts out before the overtake is complete but a man can be heard saying: “He’s overtaking. F**k me.”

A second video taken by Antony finally shows the lorry’s load being blown off and planks of wood are seen hanging over the side of the trailer.

Two men in the video are heard saying “it’s gone” as the driver is forced to pull over into the hard-shoulder.

Posting the footage online, Antony wrote: “When you’re driving home from work in Hull and wind does this to wagon and the driver was completely oblivious… madness. Lucky nobody got hurt.” 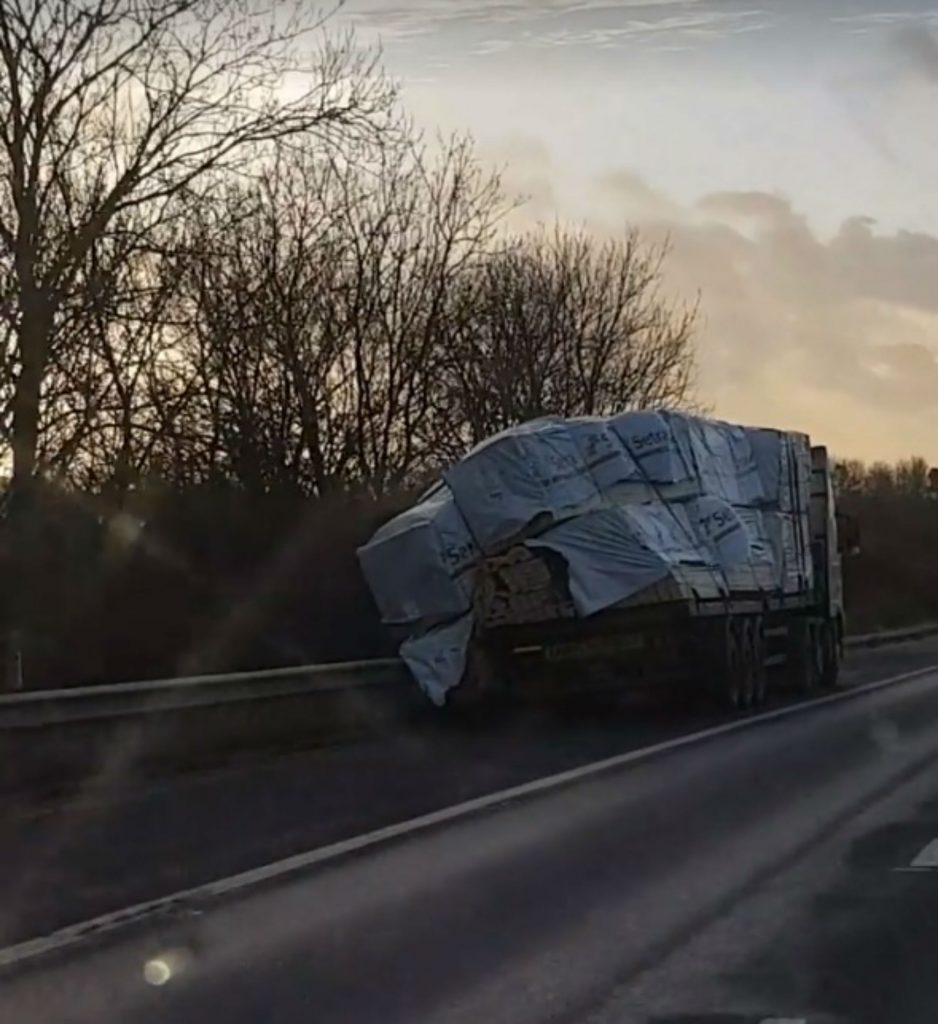 Currently the clip has been shared by over 400 social media users and received nearly 200 comments, with many suggesting there was an issue with the straps or trailer.

Robert Amis said: “I’d say at a guess it was more to do with the load being insecure than the wind.”

Tight over the load either!”

Ian Howard responded: “The plastic wrap is tighter than the straps. And I think I would be giving the spring/swinging arm bushes and the shock absorbers a good look at.”

The lorry bears the logo of specialist haulage contractors Henderson of Selby, North Yorkshire. The firm has declined to comment on the footage.