THE dramatic moment a car driver wrongly thinks he has been given right of way and gets hit by bus has sparked a fierce debate over who was at fault.

The lorry dashcam shows the car in the opposite lane stop to make a right turn and then get sideswiped by a double decker on attempting the manoeuvre.

HGV driver Nick Elliot says he made a hand gesture to the Mazda 6 motorist to stop but this was misinterpreted as it being safe to turn.

The footage, filmed in Kingston upon Thames, London, has resulted in a heated online debate among social media users with all three drivers facing criticism.

At the beginning of the video, Nick – driving an articulated HGV – can be seen approaching a line of stationary or slow moving cars.

Stopping his vehicle so as not to block the junction, the black Mazda appears to think Nick is giving way at the junction.

According to Nick, he raised his hand advising the driver to stop after seeing the bus approaching in his wing-mirror.

However, the driver appears to mistake his signal and pulls across the first lane before stopping half-way across the second after seeing the red bus.

Not seeing the car in time, the double-decker bus has not time to stop and smashes into the front of the Mazda, causing damage to both vehicles.

After posting the footage online the dramatic clip resulted in a fierce debate among road users, attracting nearly 100 comments over 19,000 views.

Some social media users put the onus on the car driver while others blamed the speed of the bus and the lorry drivers actions.

Stuart Terry wrote: “Even if you had waved him across, still more fool him for not turning with more care.”

Eric commented: “Car to blame, you just don’t pull across without checking. Bus could have beed driving a little bit slower I believe.”

Dave Baker responded: “It doesn’t matter what you did or didn’t do. It’s the cars responsibility to assess whether it’s safe to go.”

Mike McCarry said: “That bus had more than enough time too stop. Although the car is in the wrong”

Peter Down said: “Looks like the lorry driver has waved him across, perhaps thinking he had more time than he did.”

John Dring told Nick: “Sorry but you shouldn’t have stopped in that position. You should have pulled forward and blocked him which would have been far safer it’s obvious if you stop there he would take a chance on crossing.” 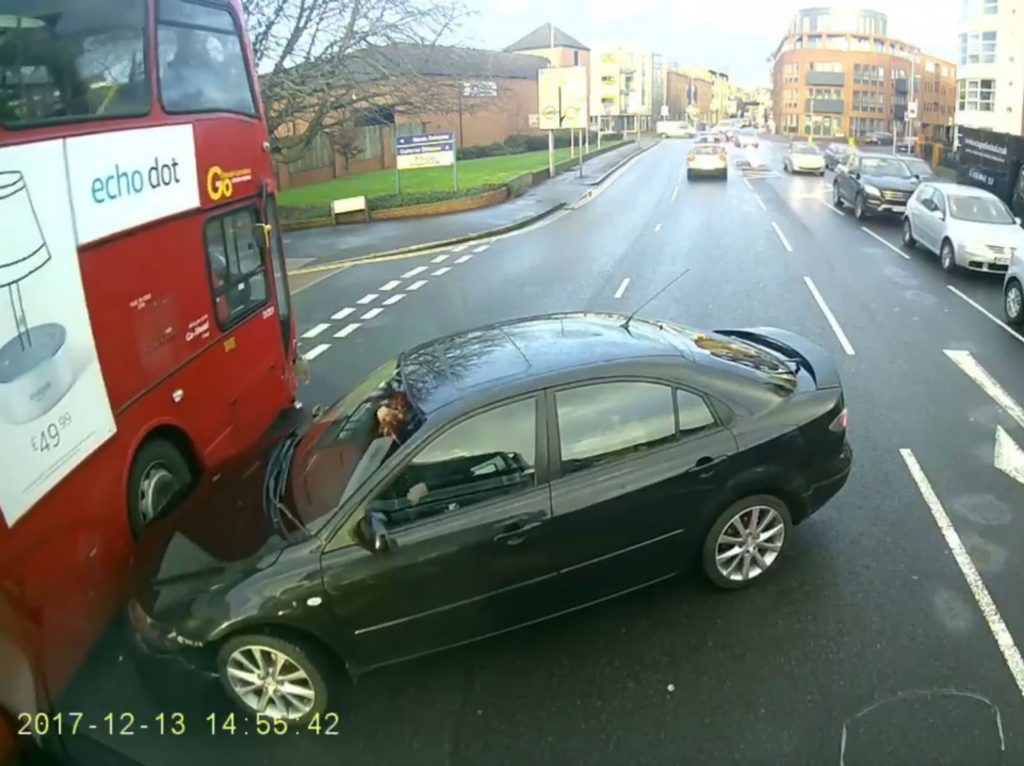 Neil Greig, Director of Policy and Research at road safety charity IAMRoadSmart, today viewed the video and was clear on the issue of culpability.

He said “In my view it’s always the driver’s responsibility to ensure they fully understand any hand signals before making a turn.

“There was clearly a misunderstanding here that could have been avoided if the bus and car had proceeded with more care. The moral is never accept another driver’s assesment of the situation until you are 100% sure it’s safe to move on.”

Speaking about the incident Nick said: “The car driver tried blaming me saying I waved him across when actually I put a hand up to tell him to wait whilst I was looking in my left mirror at the bus.

“By the time I looked forward again he was pulling across so was too late.

“I stopped so as not to block the junction as the truck is long. The wide angle lens makes the stationary cars ahead seem further away than they actually are.

“The bus was going at quite a pace though, so God knows who’s to blame.”