J.K. ROWLING has revealed a Christmas present from a fan – a Donald Trump voodoo doll.

The best selling author’s dislike of the US President is far from secret – and this may have motivated her fan to send the bizarre hand-stitched doll.

The 52-year-old posted a snap of a one-eyed, red tie wearing Trump effigy complete with his notable hairdo.

The bizarre immortalisation, which appears to have been made from white felt, has a cut out of Trump’s “disturbingly recognisable” mouth and a pile of pins to the side.

Social media users went wild for the tweet, and suggested the voodoo dolls may be a good business idea.

The writer’s tweet already has over 28,000 likes since it was posted yesterday (DEC 19).

Cindy said: “This is hilarious, but seriously Voodoo Trump dolls may be Amazon’s #1 seller soon.”

Alice Patricia added: “Someone should mass produce those voodoo dolls and sell them worldwide. They would make a fortune.”

Others couldn’t resist joking and mocking the President.

Kindgom Xathers joked: “Looks like they really got his look PINNED down.”

After Donald Trump won the Presidential election in November 2016, there was a sharp rise in the number of people buying voodoo dolls in his image.

DonaldTrumpVoodoo.com sold the dolls for $10, and on one peak day owner Sally Noedel said she made 100 dolls. 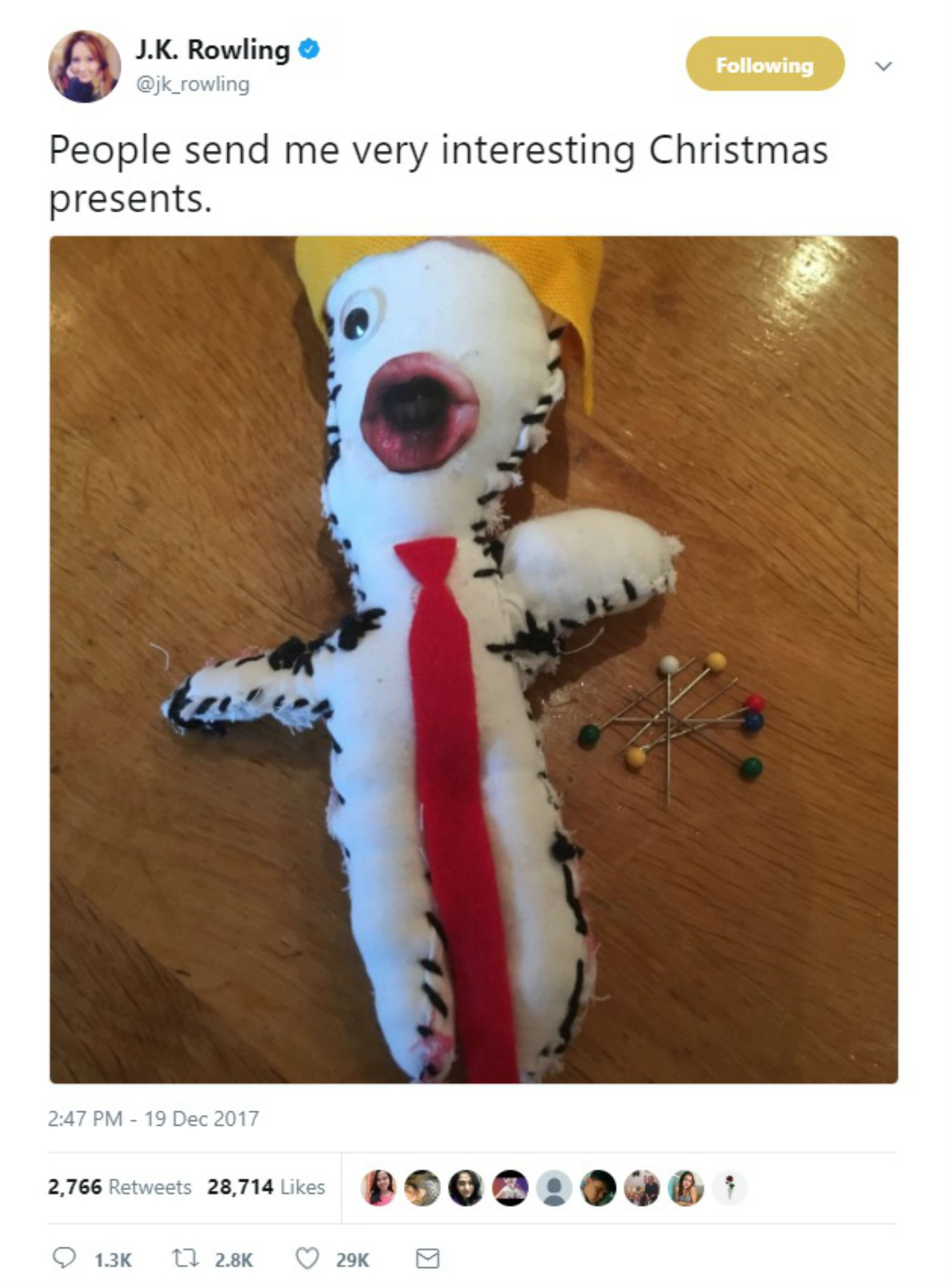 Two weeks ago, JK Rowling quoted a tweet from Donald Trump and said: “’The words of a wise man’s mouth are gracious; but the lips of a fool will swallow up himself.’ Ecclesiastes 10:12.”

And she retweeted a tweet which referenced Trump’s previous lewd remarks about women. It contained a video in which Trump asks if he can touch a turkey, with the caption: “Guess when it’s a turkey he asks permission.”

Back in October, the President went on a multi-tweet rant about Republicans, Democrats and Hillary Clinton which ended with: “DO SOMETHING.”

Rowling quickly shot him down by saying: “Nothing expresses calm confidence better than a caps-locked scream of ‘DO SOMETHING!’”