A LONELY canine giant has been inundated with friend requests after his heartbroken owner pleaded with fellow owners not to pull their dogs away from him.

Finn’s frustrated owner Robyn Burns took to Twitter on Saturday after getting sick of dog walkers yanking their dogs away from the 34kg pooch due to his size.

Robyn, from Bo’Ness near Falkirk, asked the public not to be scared of the ten-month-old Hungarian Vizsla and urged them to allow their dogs to play with him so he could make friends.

While sharing a photograph of herself cradling the gentle giant, Robyn wrote: “Infuriating and heartbreaking when folk pull their dog away from Finn just cos he’s big.

“He just wants pals to play with. Look at his wee face he wouldn’t hurt a fly. Play with him please.” 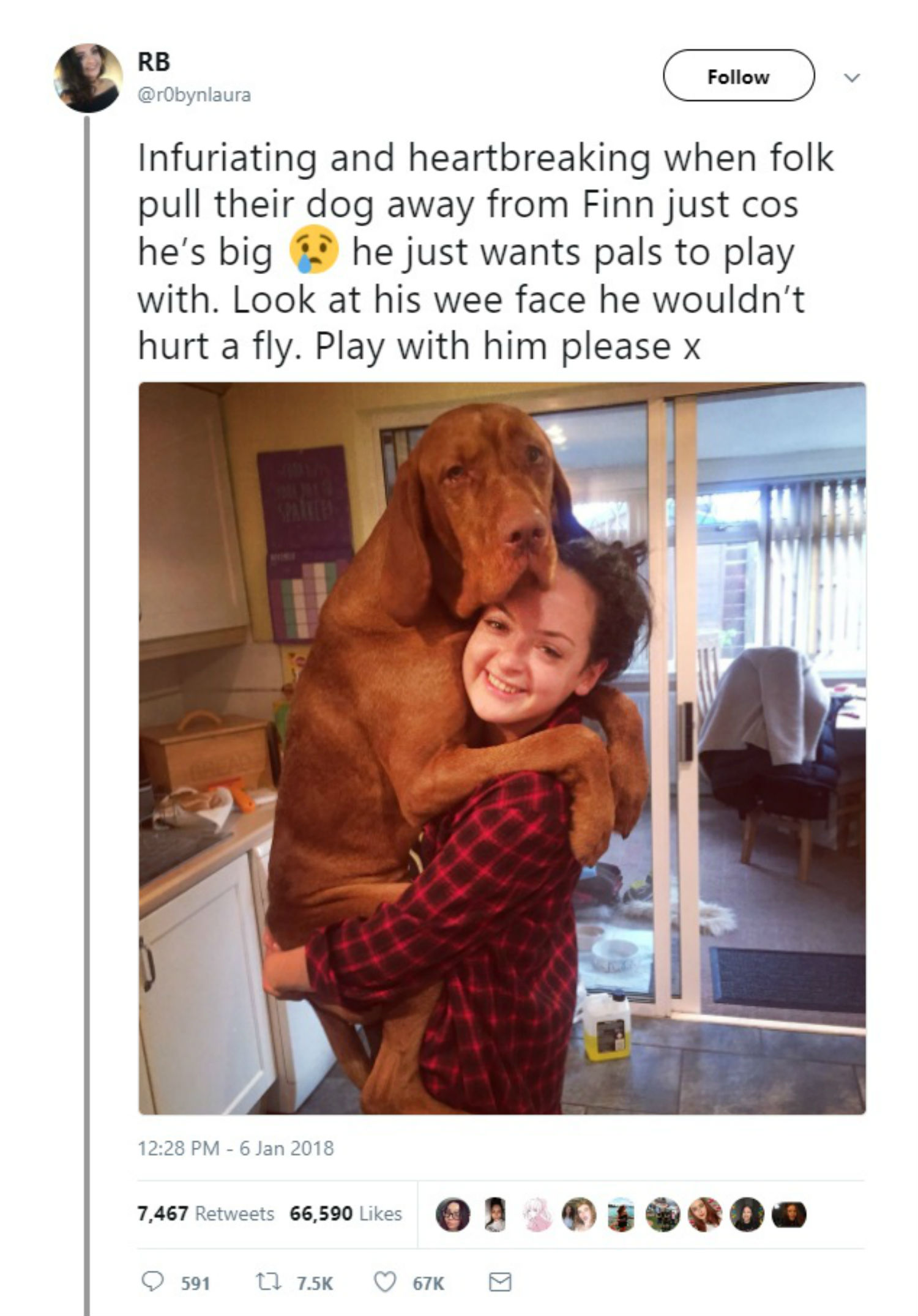 She added: “Must add I do take him away if a dog is teeny cos he’s just a big clumsy goat but someone took their staffy away from him and it’s like they should understand.

“I went to meet my pal with her pugs and he actual lay right down to show he was sound and just wanted to play, my heart broke.”

The post has since been liked more than 67,000 times and been inundated with requests from dog owners for their pets to become friends.

Images of dogs of all different breeds and sizes have been shared from across the UK by their owners.

Amy Cory, owner of a one-year-old Dalmation, shared a snap of her pooch writing: “Your dog can play with Bailey any day, He is the exact same.”

Brian Stewart posted an image of big friendly Great Dane puppy towering over a sofa writing: “Dougal feels your pain. Everything and everyone runs away from him.”

And April Todd even shared a snap of her little pug, who shares the same name, writing: “Aww, my Finn prefers playing with big dogs.”

While one friend, Claire Hutton, said she felt so bad for Finn that she is considering getting a dog just so they can be friends.

She wrote: “I’m gonna get a dog right now and they can be best buds, my heart is breaking for poor Finn.”

After the post went viral, delighted Robyn updated all her new fans the following day writing: “I got him along the shore and he’s been playing with so many dogs. Finn’s a happy boy.”

Speaking today (fri) Robyn said: “Finn is ten months so just a baby, he’s 34kg. I’m not sure exactly how tall he is but he’s up to my thighs.

“He doesn’t know how big he is.

“I just felt really sad for him so I tweeted it in a heat of the moment kind of thing.

Speaking about the reaction the post recieved and all the friend requests, Robyn said: “I was really surprised It’s been non stop since Saturday!

“I really never expected it. I wish there was a way to gather all the dogs together for a dog party.”