ONE of Scotland’s most popular sculptures, “Mirror Man”, is returning to Loch Earn after popular demand.

The figure, titled Still, was removed from the Perthshire loch last year by Andrew Low – the former owner of the adjacent Four Seasons Hotel who had commissioned the piece of work.

The looming figure, which stands almost three metres high, was erected in 2014 and has become popular among photographers and visitors from across the world.

But Mr Low faced backlash last October when he removed Still from the spot across from the hotel after selling his business over to new owners. 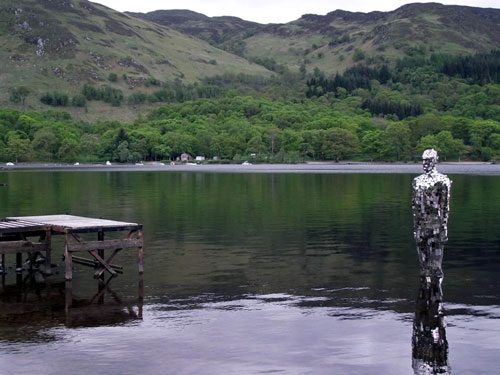 After finding out on social media, Still’s creator, sculptor Rob Mulholland, said he was “saddened” by the decision and vowed to return another statue to the water.

But now in a turn of events Mr Mulholland has revealed that plans are in place to return original Still back to the loch but in a more sheltered location.

Writing on Facebook on Wednesday, he said: “I wanted to share that I had a really positive meeting with Andrew Low this week, who originally commissioned ‘Still’ back in 2014.

“Andrew has generously agreed to have the sculpture return to Loch Earn.

“We are looking at several locations and working to secure approval. The plan is to locate ‘Still’ permanently in a more sheltered area of the Loch so that he can be seen throughout the year.

“We will need to raise funds to cover the cost of installation, maintenance and insurance.

“I should know in the next month or so if we have all the permissions required and look forward to seeing him back in the Loch this summer.

“I would like to thank everyone for their on-going encouragement and will post an update as soon as the new location has been agreed.”

Hundreds of Still fans have shared their delight at the U-turn.

Craig Haggart said: “Fantastic, looking forward to seeing Still back in his home.”

And Rob’s sister Eileen Mulholland said: “Awww the news we all been waiting on. Well done bro.”

Still was commissioned by Andrew Low, the former owner of the Four Seasons Hotel, in 2014.

He sold the business last year and the new owners revealed that the statue was not included in the sale of the hotel.

Rob Mulholland found out through social media that the statue had been removed without him being informed.

At the time some users claimed that Mr Low was looking to gain a four figure sum for Still.

At the time Mr Mulholland released a statement vowing to find a way of re-installing Still.

He said: “I have been touched by the number of messages and emails I have received from people expressing their fondness for ‘Still’ and their disappointment at his removal. It has been heartening to learn how much ‘Still’ means to so many people.

“I have tried to contact both the previous owner of The Four Seasons Hotel and the current owner to gain a better understanding of the situation but to date I haven’t been able to speak to either party.

“I cannot therefore shed any light onto why this decision has been made.

“If however if it is within my powers and, if the community of St Fillans supports the idea, I will do my very best to find a solution and re-install ‘Still’ in the loch.”

Still, made from hundreds of mirrored tiles and known to locals as Mirror Man, was taken down in 2015 after being battered by 110 mph winds and high tides.

The half-ton art installation was found lying under the water a month later – decapitated, badly scratched and with pieces missing.

After thousands of pounds of repairs were carried out he was resurrected a few months later.