HIBS fan and Britain’s youngest EuroMillions winner Jane Park has been applauded after standing up to a Rangers fan who mocked her sepsis.

She traded insults with the supporters after her team beat Gers 2-1 on Saturday.

One was particularly nasty and slagged her off over the infection she contracted after a Brazilian bum lift.

The fan had written prior to the match: “Andy Murray and his maw, Jane Park, Proclaimers, @jonnyrmcfarlane. Am warning aw a yees. Keep oot ma f****** wiy oan Saturday or I’ll knock f*** oot a every single wan ae yees.”

After the win, Park laughed and asked: “How you feeling now?” 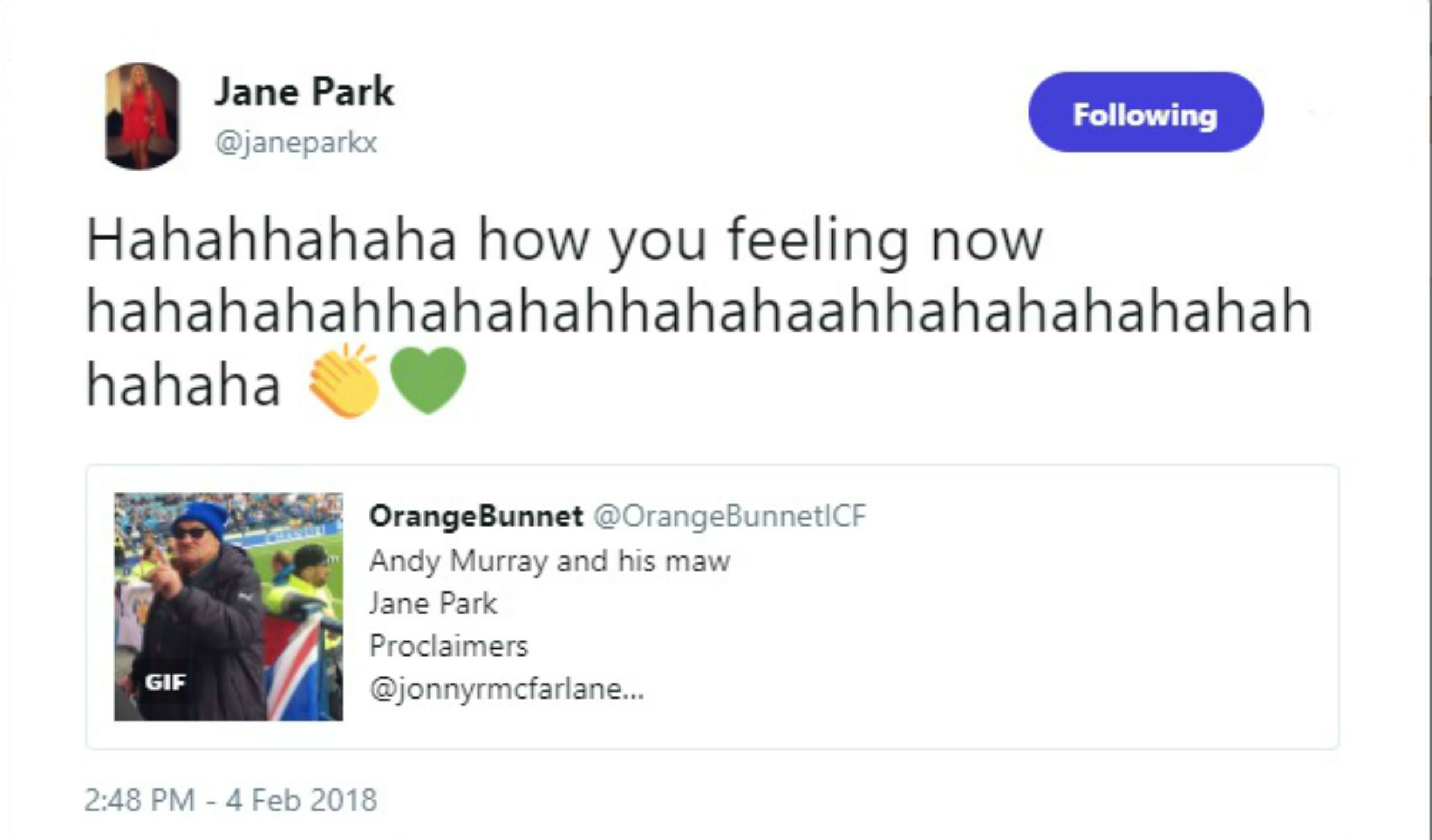 The account sent a picture of her swollen face when she had sepsis and wrote: “Feel s***.”

She hit back saying that the photo didn’t bother her and mocking Rangers’ liquidation in 2012. She said: “I’m not afraid of this image so f** I could have had a life threatening infection and lost my life no shock you’d have a dig at that instead of digging up your club from 6ft under.”

Luke Clark, the best friend of Celtic and former Hibs striker Leigh Griffiths, backed the socialite up and said: “1-0 JP.”

Mark Bisset added: “That’s not right a numpty bringing up a pic like that. F*** meb we got beat Hivs robbed us yesterday just like we robbed them at Easter Road get over it. Ignore him we ain’t all like that.” 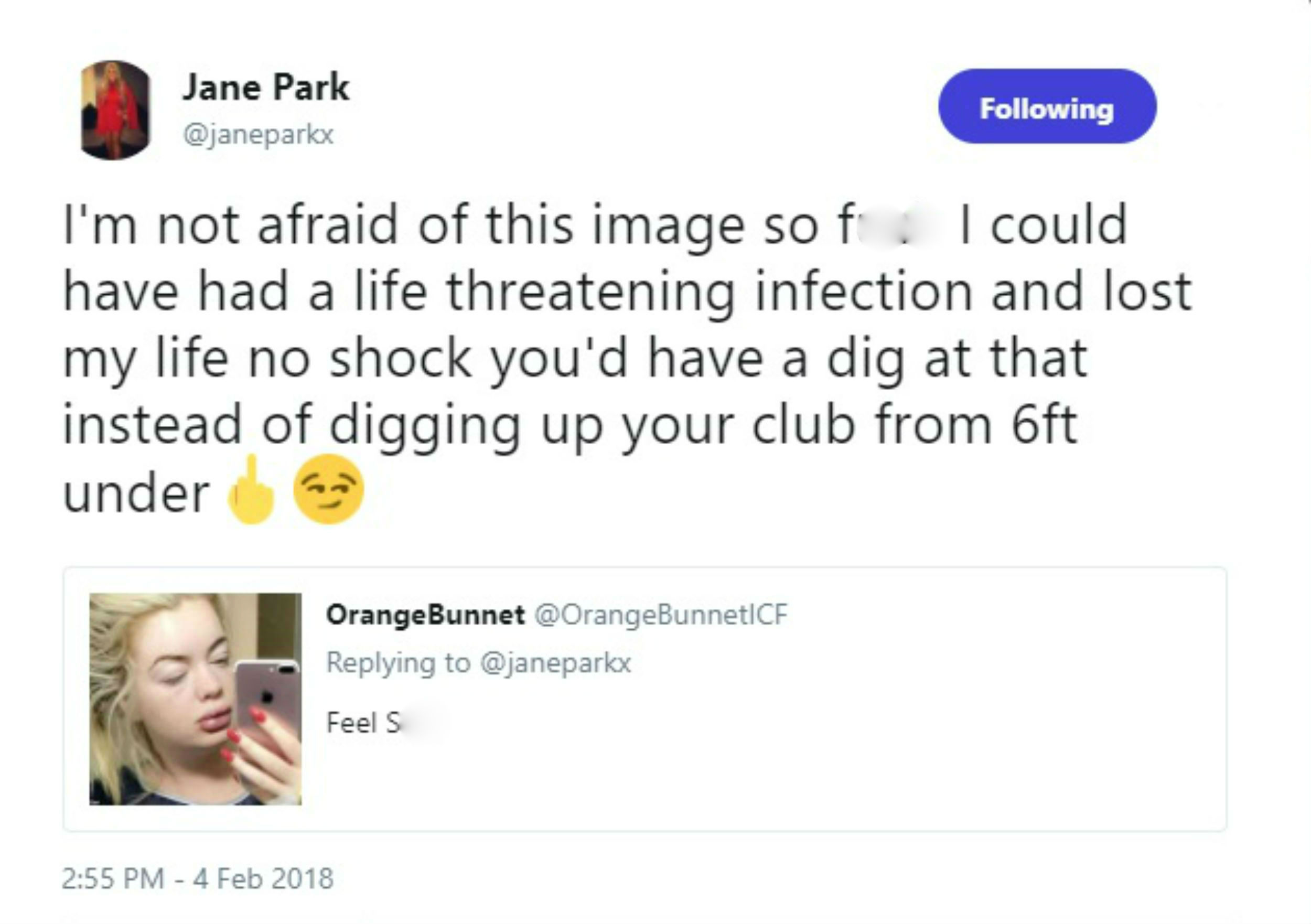 Owain Lacey said: “Jeez what is wrong with people.”

The 22-year-old got into a separate spat with another Rangers fan, Sam McLean, who had slagged her off about the grammar in her tweets.

She fired back: “I’m Scottish and your haircut is smart. F*** off grammar polis don’t care.”

Sam replied: “You are a class act you tramp”, causing her to go off on one again. 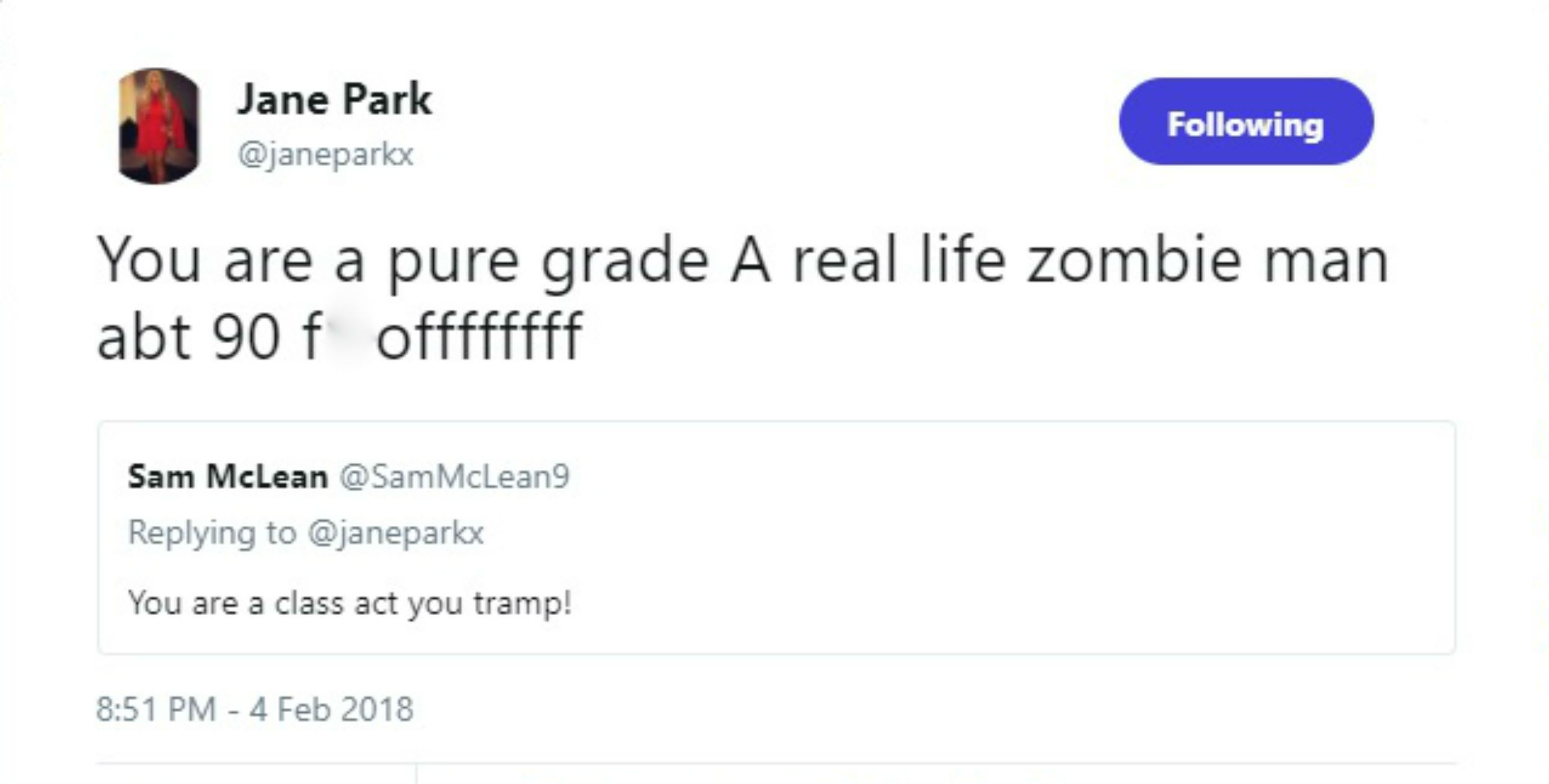 Last week Park, from Niddrie, Edinburgh, had another feud with Rangers fans after former Hibs favourite Jason Cummings scored his first goal since signing for the Glasgow club.

She was branded a “fat smelly inbred b**” after asking “”Nooooooooooo. What did I just see?”

However she later claimed that she was talking about fans who had ran onto the pitch, and said she: “Couldn’t give a f about that shower a se.”

Jane Park shot to fame as Britain’s youngest lottery winner after scooping £1m when she was just 17-years-old.

She later threatened to sue EuroMillions claiming that the win ruined her life.