The Manipulate Visual Theatre Festival is a celebration of puppetry, animation and visual theatre in Scotland. It took place in Edinburgh’s Traverse Theatre from January 27 to February 4. The following snapshot reviews are BY JEAN WEST

Love by Luden’s Ensemble starts its unorthodox journey with an upturned white umbrella, jaunty feet poking out through the sides.
Evocative images of seaside nostalgia are projected onto its skin, tugging at our senses with waves and seagulls, as it ushers us through Shakespeare’s sonnets on this heady theme.
The teeth and mouths of whited out faces of actors in similarly blanched garb are brought into relief, blown up on a screen as they spill out the words of the haloed Bard, articulating dreamy, unfettered passion through contemporary choreography. But do the umbrella and later a ladder walked across stage by one player harbinger doomed relationship?
Are slings and arrows about to fly? At scratch stage still, it isn’t the easiest piece to follow as embryonic concept takes form. Audience feedback may yet crystallise the piece.

Hand//Shake is a pulsing, rhythmic romp, that moves the spark elicited by a simple handshake to something fast, flowing and intimate.
In this beautiful vignette, choreographer Katie Armstrong and dancer Lucy Ireland meld and writhe a whirlwind, seemingly random meeting to a swift conclusion through the first movement of Bach’s Violin Concerto in A minor, as the performers explore each other in ever more complicated moves: dizzying, hypnotic and wonderful in every way. 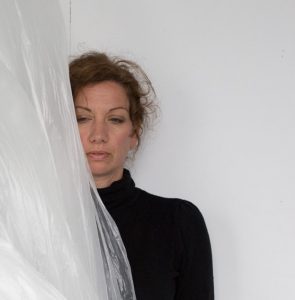 If Carl Jung’s thesis that the human psyche communicates meaning through metaphor and play is correct, Francisca Morton is a masterful interpreter.
A psychotherapist by day and a playworker to boot, in Nothing by Faux Theatre, she confidently dives into a silent dialogue about a life spiralling out of control and into a sticky depression – using nothing more than her guile, wit and a sheet of polythene.
Her fast-paced, interactive piece throws up empathy and concern about the see-sawing of emotion and fragility of mood, and not least how she will prevent herself from suffocating under a thin film of her own melancholy (and plastic.)
I had worried that the piece might be too dark. But it was anything but. To a mesmeric acoustic guitar score by Dave BeMac, Morton compels us with deft touch, comic timing and dramatic assurance, demonstrating a spectrum we all occupy from light to heavy, depending on our resilience.
As the clock ticks away her life and the drudgery of work replicates day after day her happy little spirit retreats.