JOHN McGINN admits he breathed a huge sigh of relief when the January transfer window closed because he allowed constant speculation over his future to affect his performances for Hibernian.

The Scotland internationalist has been linked with a series of moves away from Easter Road in recent times, with Celtic, Nottingham Forest, Ipswich Town and Cardiff City all credited with interest in the midfielder.

The 23-year-old claims he was never going to leave, having pledged to see out the current campaign in the capital before taking stock as he enters the final year of his contract at the club.

With certainty in his short-term career now confirmed, the former St Mirren youngster believes his form can only go from strength to strength. 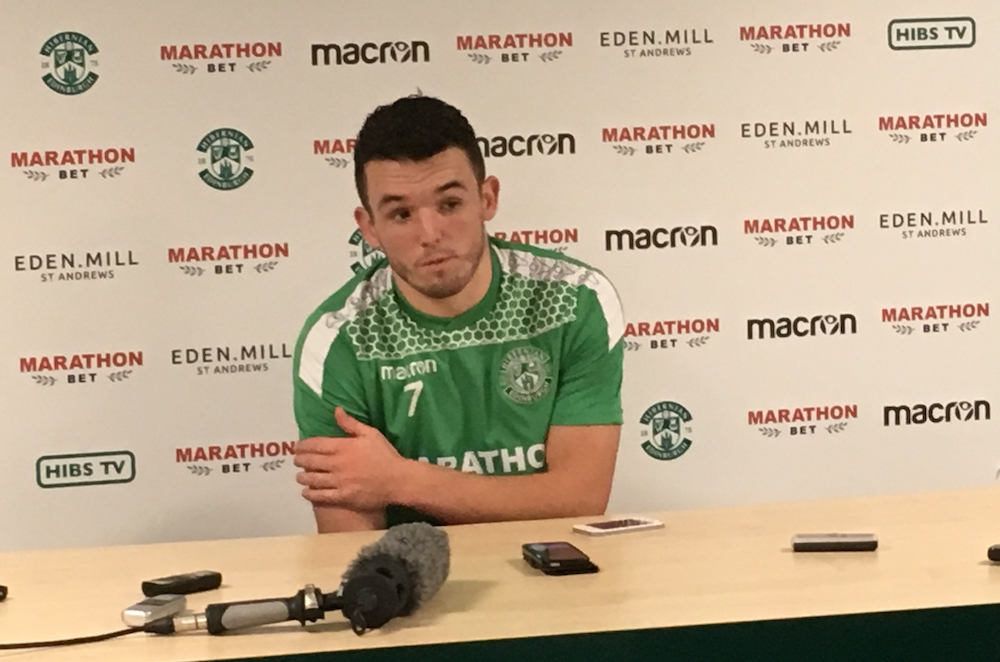 “January was a strange month for me,” he said ahead of Saturday’s meeting with Aberdeen. “I was asked three or four times about my future and each time I said I was happy here and that I would reassess things in the summer.

“But that didn’t seem to stop the speculation! It just kept coming and coming.

“It’s something you say shouldn’t affect you, but subconsciously it can. It affects your game.

“So once the window closed it was good to get that weight off my shoulders because I knew deep down I was staying here.

“Obviously there were rumours going around. Now, hopefully, the speculation will stop – for a while! And that will allow me to concentrate on my football.

“Over the course of the season I think I have played some of my best football in a Hibs shirt.

“I had a slight dip but I feel now I am getting back to my best and hopefully I can show that over the rest of the season.”

He added: “Don’t get me wrong, I have ambitions down the line and I think everyone understands that.

“But it would have to be the right thing at the right time for all parties.”

McGinn is adamant he appreciates the role Hibs have played – and continue to play – in improving his game and believes there should be no rush to leave that behind in favour of a move that could ‘stagnate’ his career.

European football, something he tasted briefly against Brondby two seasons ago, is very much his next target for the Easter Road outfit and he knows a victory over Aberdeen would get Neil Lennon’s side firmly in the running for qualification along with the visitors and third-placed Rangers.

Hibs’ 2-1 win at Ibrox on their last outing a fortnight ago with a depleted squad was another indication, along with two draws with Celtic and another victory over Rangers earlier in the campaign, that they can live with the best in the league.

However, they have been beaten in each of their last three encounters with Aberdeen and that is something McGinn is eager to change.

“Aberdeen are the only team we haven’t taken any points from this season,” he added, “so we’re determined to show we can do that.

“For us, it’s so important to beat the teams around us to try and hang onto them.

“Our main aim was to get into the top-six and we’re so close to that. Once we get there we have no doubt we can go on and compete up there.

“But if we slip up against the teams around us it will be so difficult; we know we can’t do that.”