A DEFIANT Deliveroo cyclist stopped in the middle of one of Scotland’s busiest streets to “flip off” a driver who beeped him for jumping a red.

The delivery cyclist was caught on camera at night running a red in Union Street, Aberdeen.

Lewis Parley, who was stopped at the lights in his car, decided to beep the cyclist for breaking traffic laws.

The cyclist can be seen in the clip clearly wearing a Deliveroo uniform and carrying the recognisable Deliveroo delivery box on his back.

Deliveroo today described the cyclist’s behaviour as “inexcusable” and said they were investigating, warning that such conduct usually resulted in dismissal.

Lewis, 22, claimed: “This is a regular occurrence for Deliveroo cyclists in Aberdeen.

“I was surprised by the maneuver and gesture, it made me chuckle after more than anything else.”

Others reacted to the video, which was posted on Facebook by Lewis. Some of them sharing similar stories. 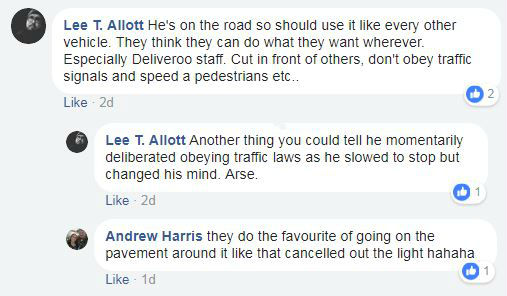 David Cordier wrote: “Nearly killed one the other day all in black, no lights and came round a roundabout as I was pulling out. By the luck, the lights of the car behind hit the reflective box as I looked round again and if it wasn’t for that he would be toast.”

Lee T Allott wrote: “He’s on the road so should use it like every other vehicle. They think they can do what they want whenever. Especially Deliveroo staff.”

Andrew Harris wrote: “They do the favourite of going on the pavement around it like that cancelled out the light hahaha.”

A Deliveroo spokesman said: “There is no excuse for this sort of behaviour. It is a contractual obligation that riders we work with abide by the rules of the road. The overwhelming majority do so in a courteous manner.

“Incidents like this are extremely rare, are inexcusable and undermine the hard-work and effort put in by the vast majority of riders.

“It is understood that these actions, breaching the Highway Code, would normally result in a termination of a rider contract with Deliveroo.”

Deliveroo are currently investigating the incident.