A CHEF has turned himself into Pooperman – by scooping up dog mess in his home town and posting the revolting pictures to local politicians.

Gavin Starkey goes out for 12 hours a week to clean up the streets and in three weeks has scooped up around 350 piles of poo, weighing in the region of 260lbs (120kg).

The dad-of-one, who doesn’t even own a pooch, makes three four-hour trips a week to hunt down dog dumps, plotting his route in advance on AA route planner. 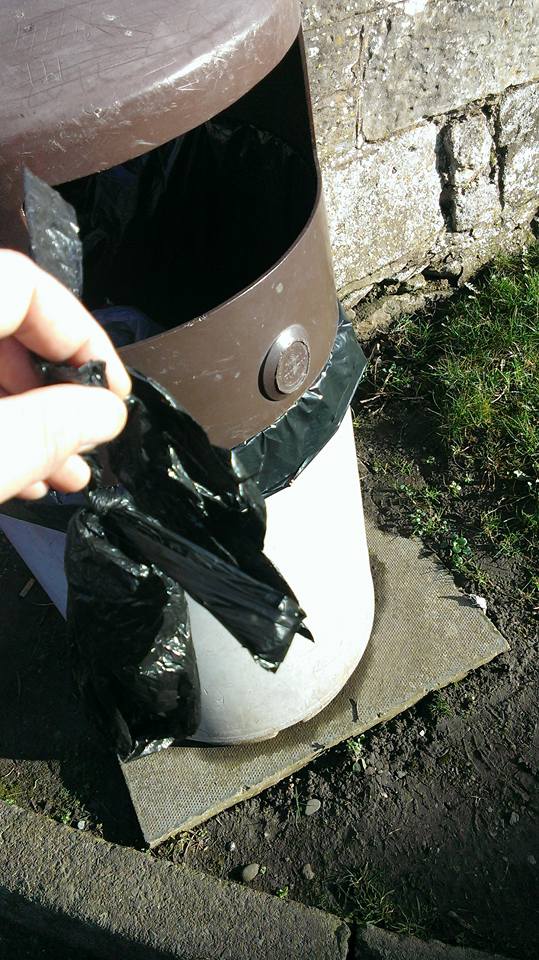 He was inspired to take up his canine crap-fighting crusade after son, Lucca, seven, slipped in dog mess on his way to school.

Gavin’s war is on irresponsible dog owners who spoil the streets of his home town, Kelso, in the Scottish Borders. He hopes to shame councillors and local politicians into taking tougher action against regular offenders.

Gavin said: “I walk my son to school every Monday morning and a couple of weeks ago he slipped and fell in dog poo and that was the final straw for me.

“There was so much outside the primary school, and its disgusting and very dangerous from a health point of view.

“It’s been about three weeks now and I’ve picked up at least 350 bags of poo.

“I’ve never found it disgusting to pick up, I can wash my hands quite happily but there are young children and older people in the community who might not do that.”

Gavin has also spent about £45 of his own money buying biodegradable poo bags for his new venture.

The local community council has agreed to provide bags and he has teamed up with Borders Pet Rescue to raise money for them whilst he is on his patrols.

He said: “I’ve had a lot of support, obviously some friends and family think I’m fighting a losing battle but on the whole I’m going strong, just have to fight back.

“I want to get the mesage acrross, and I’m dedicating almost half the working week to this. That’s how passionate I feel about it.”

Gavin says he knows there are regular offenders in his area but has been warned by police not to get into any confrontations.

In a video, he and his son tell viewers they have collected six bags in 50 yards, describing the extent of the mess as “unacceptable”.

Brian Johnstone wrote on Gavin’s Facebook page: “Kelso’s resident poopa scoopa. Why don’t some of you community councilors roll up your sleeves and help?”

Keith Rothwell wrote: “Brilliant effort. Hoping some people are ashamed of themselves. You shouldn’t have been put in this position. Hats off Gavin Starkey.”

Dan Yell wrote: “Well when I’m out and about I’ll be taking a few bags, if I see any lying I’ll bin them. Every little helps. BIG help is the owners just did it in the first place though.”

Conservative MP for Berwickshire, Roxburgh and Selkirk, John Lamont, wrote: “I admire you for tackling this issue. I have contacted Scottish Borders Council on your behalf to see how the council might be able to support you.”

Across the UK it is estimated that the nation’s eight million dogs produce 1,000 tonnes of mess annually, much of which ends up left on the streets.

Dog fouling has been an issue for councils across the UK. In 2014 Fife council wardens began using thermal imaging equipment to track the recent ‘products’ left behind by night-time dog walkers.