A DRAMATIC video shows a biker being chased by a gang in an apparent bid to corner him and get away with his valuable machine.

The biker is repeatedly surrounded and taunted by the gang of at least eight, one of whom is on a quadbike.

At one point, one of the crooks gets very close and attempts to knock the rider off his bike.

The biker, who wishes to remain anonymous, was riding in Birstall, West Yorkshire, on February 11 when he was targeted.

As the video begins, the biker’s head cam shows two people on a quad bike and two others on road bikes.

He carries on past them but when he has to stop at a roundabout they catch up, with the first few members going past but looking closely at him.

One of them, with a red marking on the front of his bike, a black and white helmet, black jacket and grey joggers stops, leans towards him, and inaudible words are exchanged.

As they move off, the man’s pursuer appears to try and barge him before admitting defeat and speeding off. 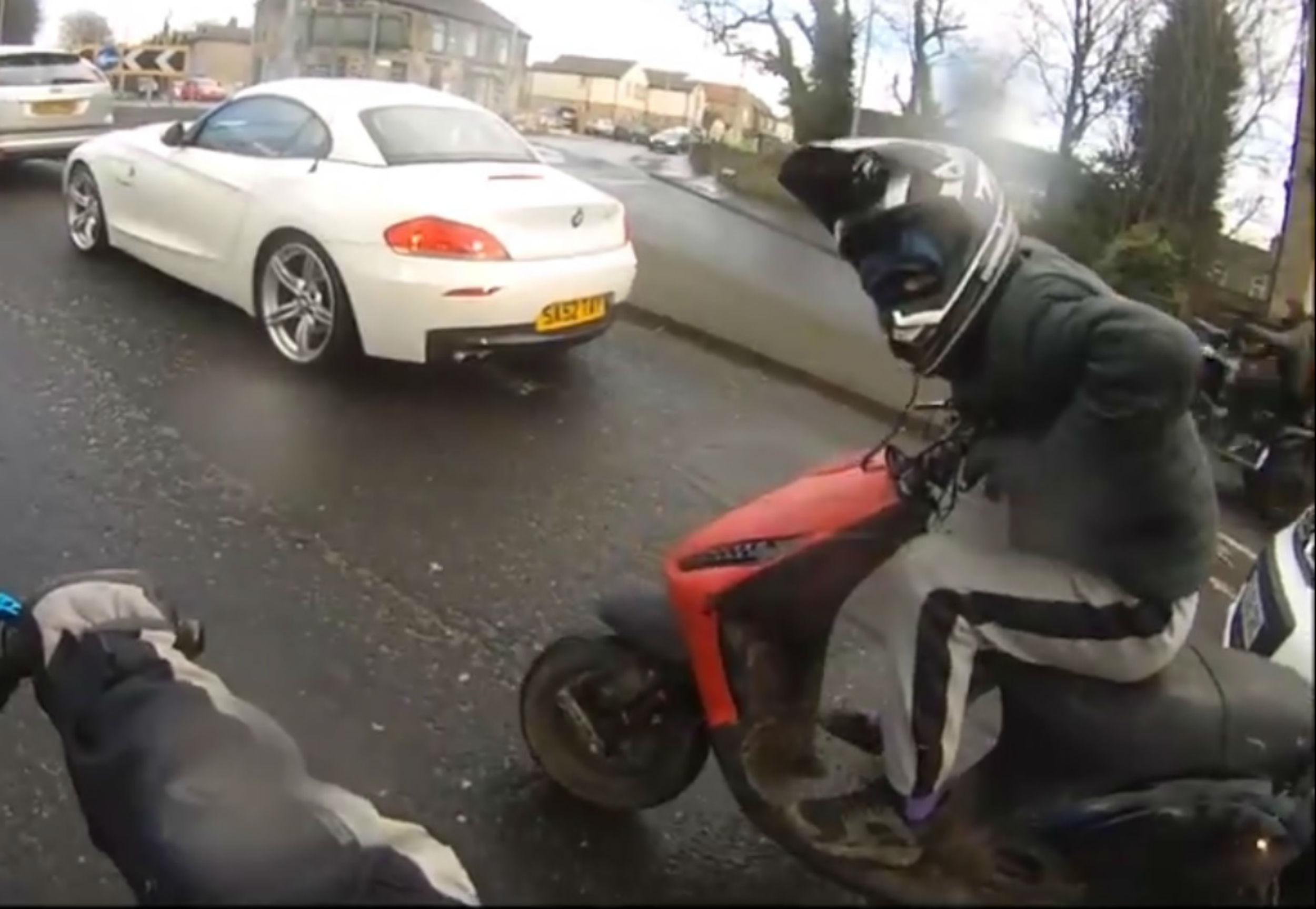 The chase continues and more members of the bike gang appear.

He catches up with them again as some slow down to let him get in front and ensure he is circled.

With three of the gang members attempting to close him in, he sees a gap and bravely accelerates through and away from them.

When a set of road works appear, the man sees his opportunity to move away from the circling yobs and into the side of the road at temporary traffic lights. 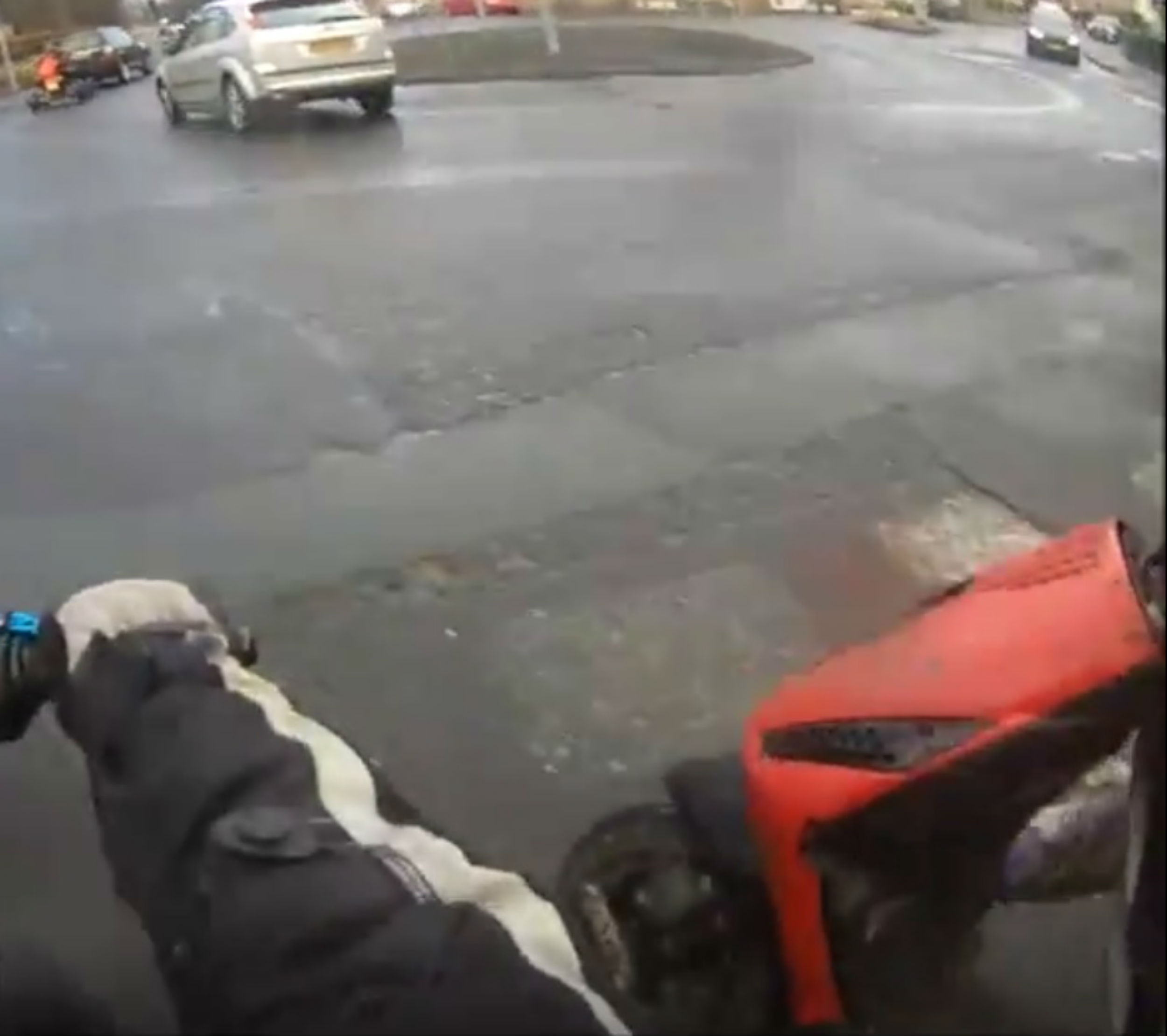 He dismounts and takes his keys out of the ignition before appearing to encourage the group to move off.

His partner, who also wishes not to be named, posted the ordeal to her Facebook page and said: “I’m wanting info, who and whereabouts of these stupid little people. Took place sunday 11.2.2018 between 1pm and 2pm. Happened on Bradford Road on to Oxford Road going towards Bradford, West Yorkshire. Repost please.”

Leanne Seonaid Shirley said: “Little f*****s normally do this as a boxing in tactic to try slow you down stop you ready to steal bike. They try knock you off, I’ve seen it done when I’ve been walking in the street it’s awful.”

Robert McMahon said: “Looks to me like they were after his bike, police won’t touch these people for fear of reprisal, so unfortunately this kind of incident is fast on the rise.” 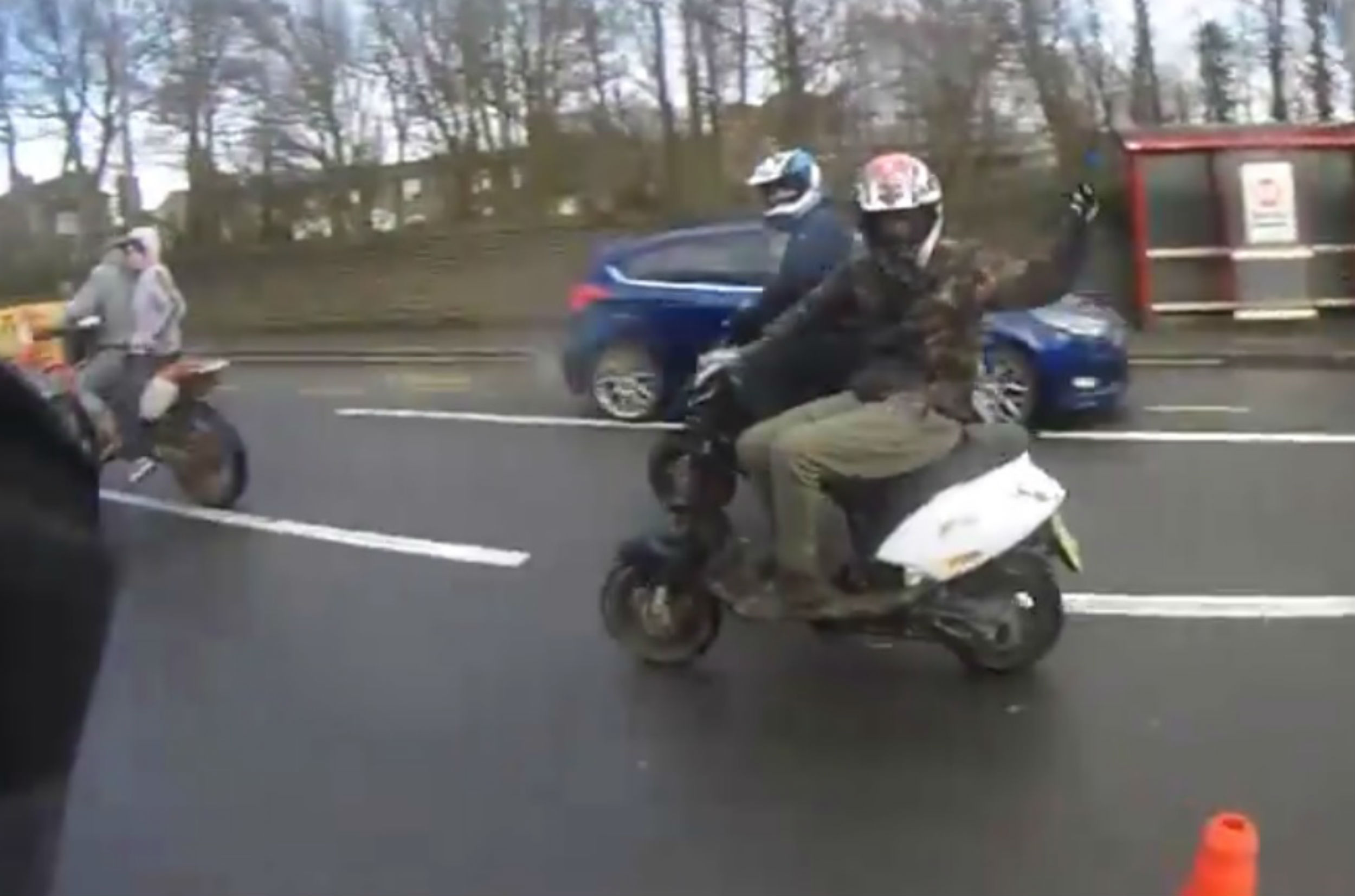 Danny Clark said: “Sorry for the language but they’re complete f****** idiots they deserve to be hit off there s*** little bikes the set of f*****s.”

Suki Jean Elizabeth Hutchison said: “They won’t last long doing that. They weren’t even watching where they were going. They’ll be another sad statistic. Hope you’re ok.”

Brian Kernohan said: “The police really need to clamp down hard on this type of thing. The bikes need seized and crushed to stop this sort of behaviour.”

Belinda Knott added: “Shocking. It makes terrible viewing. I’m a biker too in the area and this is very worrying.”

West Yorkshire Police said they had been called to reports of various vehicles including quad bikes, mopeds and scooters being ridden dangerously on Sunday February 11.

Superintendent Marianne Huison of Kirklees Police, said: “We treat instances of dangerous driving very seriously. I would appeal to anyone who witnessed this or has information about anyone involved to contact police.”