FURIOUS parents are vowing to boycott Robinsons Fruit Shoot, claiming a change to the ingredients is making children sick.

BritVic, who make the popular soft drink, announced in 2016 that they planned to make changes to their recipe to comply with sugar tax.

According to parents, the firm has added two vitamins, Niacin and Biotin, claimed by some to be associated with nausea, diarrhea and headaches.

BritVic have insisted both vitamins are safe for human consumption, occur naturally, and are frequently added to cereal.

The change in ingredients came to light yesterday (wed) after a concerned parent, Spike Richardson, noticed the changes and issued a warning on Facebook. 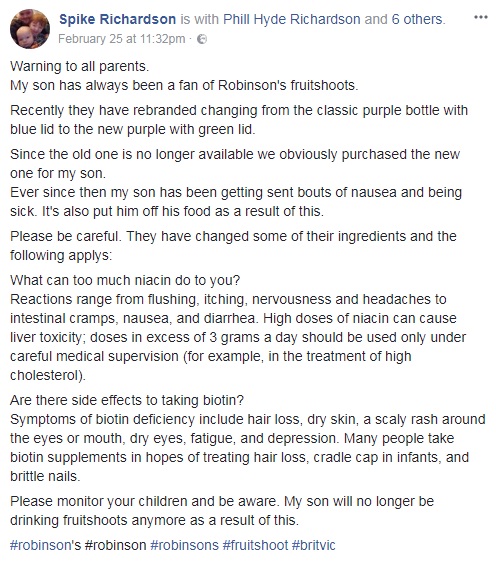 He said: “Warning to all parents. My son has always been a fan of Robinson’s Fruit Shoots. Recently they have rebranded changing from the classic purple bottle with blue lid to the new purple with green lid.

“Since the old one is no longer available we obviously purchased the new one for my son. Ever since then my son has been getting bouts of nausea and being sick. It’s also put him off his food as a result of this.”

Spike, from London, then listed some of the side effects associated with two new ingredients that had been added.

He claimed: “Reactions range from flushing, itching, nervousness and headaches to intestinal cramps, nausea, and diarrhea.

“High doses of niacin can cause liver toxicity; doses in excess of three grams a day should be used only under careful medical supervision.

“Please monitor your children and be aware. My son will no longer be drinking Fruit Shoots anymore as a result of this.”

Spike’s post has attracted almost 75,000 shares and attracted hundreds of comments from parents also claiming their children have been made ill.

Hayley Johnson wrote: “Alfie got sent home from school last week because of being sick,, He was alright over the weekend. Weren’t til earlier he had a Fruit Shoot, shortly after sickness started again. He hasn’t long been able to fall asleep.”

Lauren Jade Hatfield wrote: “Omg I thought I was losing it! My daughter had one of these new ones the other day with a takeaway, she came up in a rash on her face like instantly.”

Kirsty Smith wrote: “My son had these new ones last week. Hasn’t been himself all week and threw up purple sick last night! I’m going to look into this!”

Sian Bunch said: “Wow, my boy had this with his lunch today and has complained about a bellyache since.”

Paul Wisdom wrote: “This is the sugar tax in effect. Sugar free? Think chemical s***storm instead, they’ve gotta make it palatable some way.”

And Lara Ann Peter said: “Really bugs me they don’t tell you when they change the ingredients.”

A spokesperson for Britvic said: “Niacin and Biotin are ‘B’ vitamins and are safe for human consumption, for example avocado and salmon are natural sources of Biotin.

“Brown bread and meat are rich in Niacin, which is also added to many breakfast cereals. All the ingredients used in Fruit Shoot are safe and permitted for use in line with the legislative requirements.

“Biotin and Niacin are two B vitamins which are included in the multivitamin mix for Fruit Shoot, each of which contains 8% of the reference intake per 100ml.

“These vitamins contribute to normal energy yielding metabolism, psychological function, and the reduction of tiredness and fatigue.

“Fruit Shoot is now in new look packs, which we developed in consultation with parents, and they started rolling out in stores at the beginning of February.

“At the same time as we updated the packaging, we also reviewed the liquid and made a small change to the multivitamin mix which is standard practice, and done to ensure we are creating the best possible drinks for our consumers.”

The University of Maryland Medical Centre in the US, states: “Niacin has been used since the 1950s to lower elevated LDL (bad) cholesterol and triglyceride (fat) levels in the blood.

“However, side effects can be unpleasant and even dangerous. High doses of niacin cause flushing of the skin, stomach upset (which usually subsides within a few weeks), headache, dizziness, blurred vision and an increased risk of liver damage.

“A time-release form of niacin reduces flushing. But long-term use is associated with liver damage. In addition, niacin can interact with other cholesterol-lowering medicines.”