THE Scottish council at the centre of jokes that it fixes roads with Coco Pops is facing further flak after painting white lines over potholes.

Now a series of pictures shows fresh white lines painted right through the middle of potholes – perhaps suggesting they are not going to be fixed any time soon.

Angela Frater, from Kilmarnock, was shocked to see the “ridiculous” work being done and took photos. 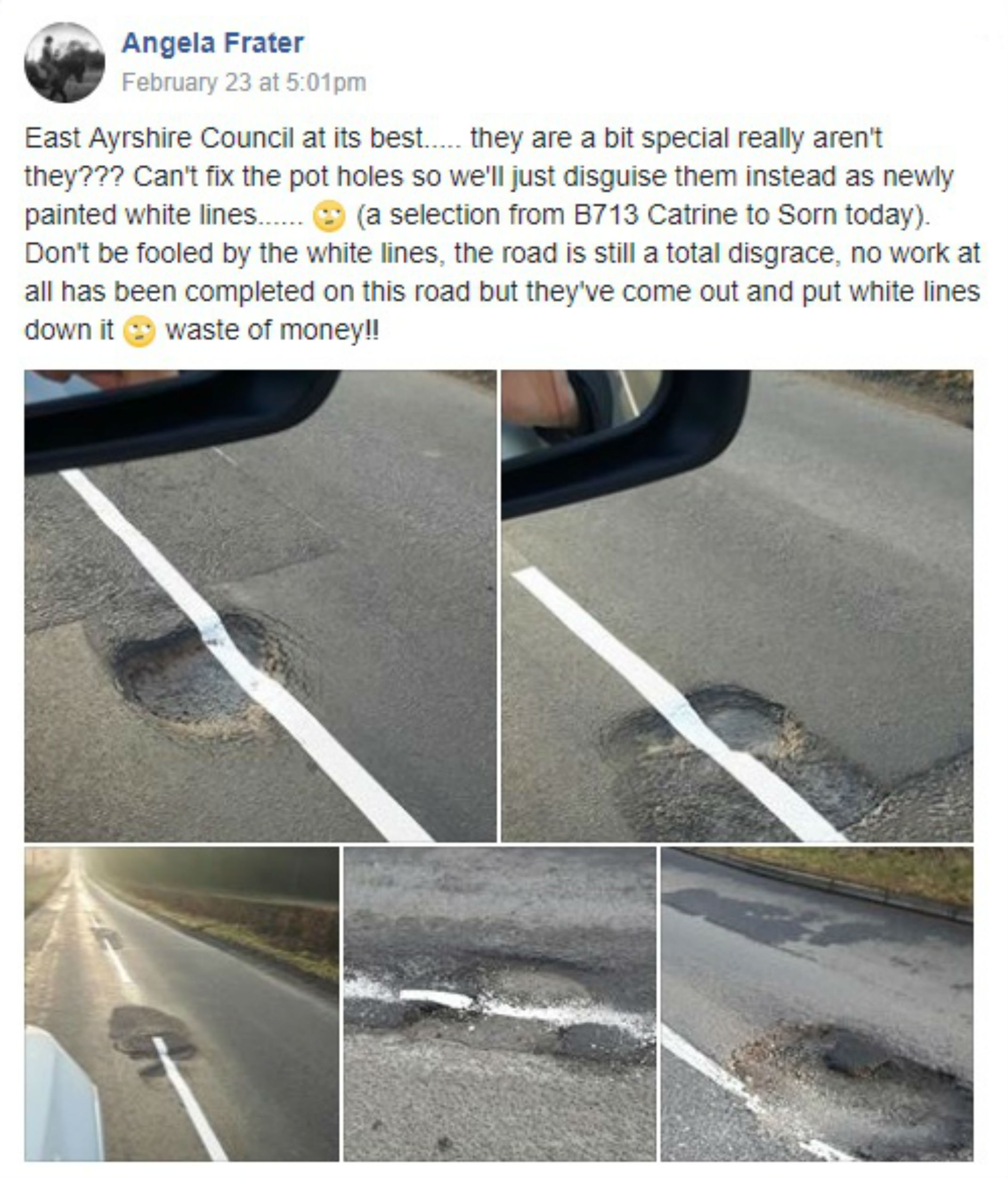 She shared them online where social media users have slammed the council.

The images, taken on the B713 between the villages of Sorn and Catrine, show three potholes which workers have gone over with their line painting.

In another, the lining appears to have already faded, and another shows a large crater with a line yet to be repaired.

Angela shared them in the ‘Fix Our Roads Ayrshire and Arran’ group on Facebook.

She wrote: “East Ayrshire Council at its best, they are a bit special really aren’t they? Can’t fix the potholes so we’ll just disguise them instead as newly painted white lines. A selection from B713 Catrine to Sorn today.

“Don’t be fooled by the white lines, the road is still a total disgrace, no work at all has been completed on this road but they’ve come out and put white lines down it. Waste of money.”

Stuart Hornell said: “Catrine to Sorn nice new white lines at what cost? Then come out and fill the potholes and the lines are needing redone at more cost. Ayrshire Roads Alliance great job. Glad you’ve approved all the extra funding.”

Colin Templeton said: “Are the council having a laugh?”

Leslie Ames said: “It’s waste like this that is sorely needed looking at. No leadership from top down. Someone needs to look at this.”

Speaking today, Angela said: “The condition of the roads around me is genuinely shocking.

“My car is only two years old and just had major works done on its suspension, my husband’s car required a full geometry reset at only one-year-old and we’ve had two very expensive punctures in recent months.

“The white lines on the road through the potholes was just the ridiculous icing on the cake. Total waste of taxpayers cash.” 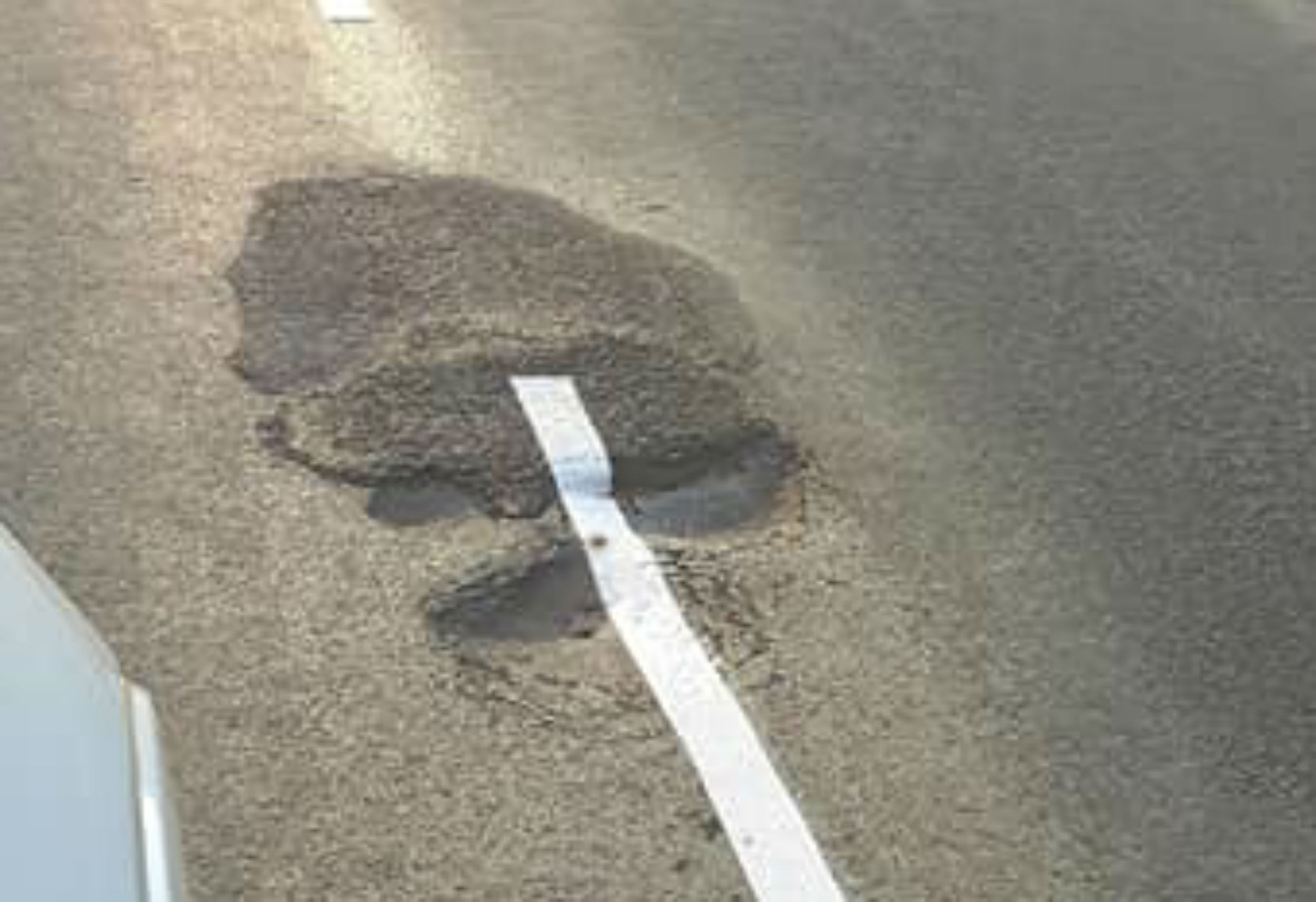 Last Thursday parody Facebook page ‘East Ayrshire Cooncil’ posted a video of a ‘council worker’ repairing the potholes by filling them up with milk and coco pops.

They captioned it: ““F*****g Coco Pops! This is what £6million gets you!”, and the man describes it as a “cheaper alternative” because they only have a £6million budget, and a “temporary fix until we get a better budget.”

The video was viewed over 2 million times and shared by 33,000 social media users.

East Ayrshire Council today claimed the lines were a temporary measure in response to locals’ concerns about not being able to see the edge or centre of roads.

Spokesman Stewart Turner said: “We acted on those concerns and temporary lines have been marked on the road surface, which included areas due for repair. I can understand why some might misunderstand this action, but once the resurfacing work is complete, wider, permanent lines will be painted onto the new road surface.”