DRAMATIC footage shows the moment a dad was heroically saved from an oncoming truck by a stranger who had just rear ended his car.

Mark Wall, from Nottingham, had just crashed into the back of Liam Hicken’s car on the A1 near Retford in Lincolnshire last Wednesday before saving his life.

Both motorists are shown on the dashcam getting out of their cars to discuss the bump when an approaching truck came hurtling towards them.

Liam had been facing the out-of-control truck and was shaking hands with Mark when he managed to pull the 47-year-old dad out of the way just in time.

A dashcam situated in the back of Liam’s car shows the almost tragic moment unfold.

And the dashcam, located on the front of Liam’s car, caught Mark’s screams as he shouted for the pair to get out the way of danger.

The footage from the front shows what caused the whole thing – a jackknifed lorry which has collided with another car in the snow and is blocking the full dual carriageway.

Liam stops in front of it but Mark was unable to stop quickly enough in the slippy conditions and dunts the back of him.

The back footage shows the pair greet each other with a handshake, but then Liam spots the imminent danger of the truck coming towards them. 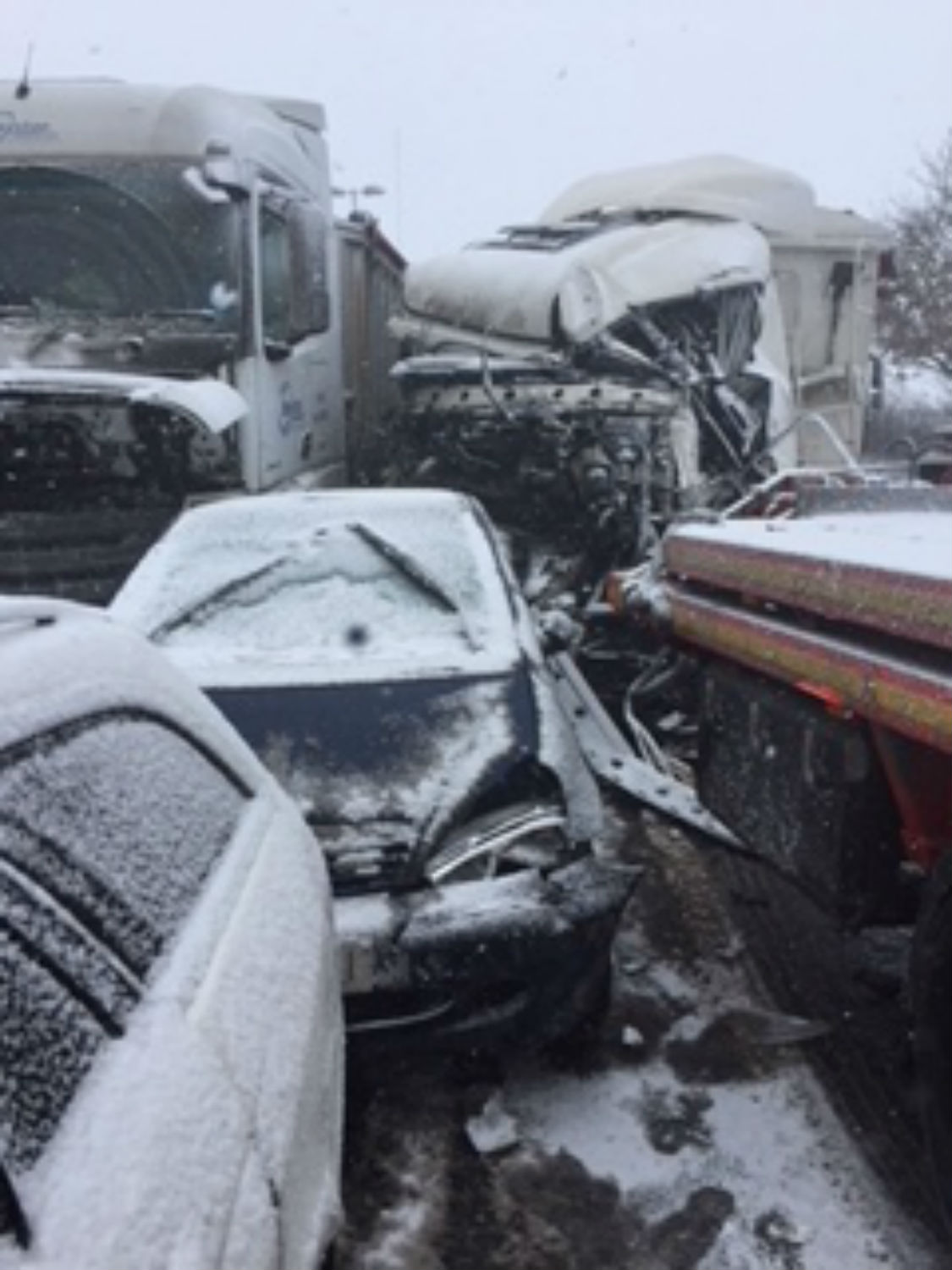 He quickly pulls an unaware Mark to safety, repeatedly shouting: “Come on, move.”

The pair bolt to the front of the stationary car, which is then smashed into and shunted forward by the impact, almost colliding with them as they scarper away.

As the footage rolls on, another vehicle joins the pile up, knocking into the back of the truck and sending it forwards.

Business Development Manager Mark said: “He’s my guardian angel. He pulls me right out of the way.

“I had no real clue what was going on. I was just looking at him and he was looking towards the back.

“Let’s face facts we all would have done exactly the same – but he was there and he did it. He saved my life that day.

“It wasn’t until later that evening when Liam sent me the footage that it really hit home.”

Liam was a bit more modest about his heroic actions.

He said: “It all happened very quickly, it was just an instant reaction. I had just jumped out and went to shake his hand when I saw a vehicle and I gave him a b* good yank.

“I was just in the right place at the right time, it was a natural reflex. I was just relieved to not be injured, and our attentions turned to everyone else. Fortunately no-one was seriously injured.”

Mark shared his “guardian angel’s” footage on social media and wrote: “Front and rear footage of today’s crash. Oh my god wait till the end on the rear clip, I was so lucky.” 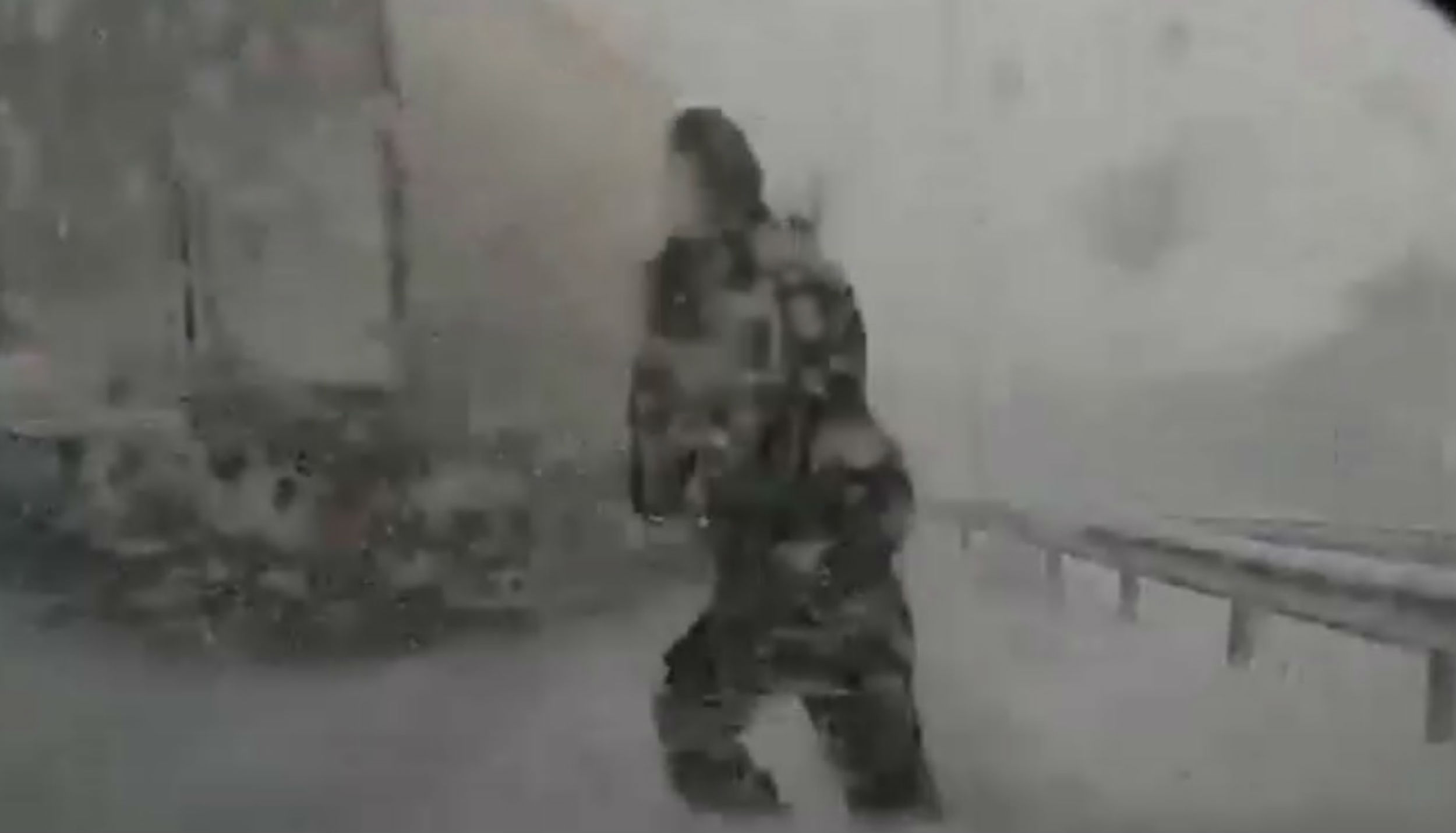 Social media users were shocked by the footage and agreed that Mark had a lucky escape.

Emma Murphy said: “Every time I see the front clip it gives me shivers. You were so lucky matey and thank you Liam for keeping you with us.”

Sarah Attrill said: “Oh my god Mark you were so lucky not to have been hurt.”