VILE yobs have daubed paint in the colours of Rangers on a memorial to a Celtic hero who died during a match.

The John Thomson 3G pitch, in the legendary goalkeeper’s hometown of Cardenden, Fife, has had blue and red paint thrown on its artificial grass and a sign bearing the face of Thomson.

The pitch was opened last year by Hoops captain Scott Brown, himself a Fifer, after a tremendous fundraising effort from Celtic supporters and other local groups.

It is a memorial to the heroic keeper, who tragically lost his life aged 22 after bravely tackling Rangers player Sam English during an Old Firm derby on September 5 1931, suffering horrific injuries. 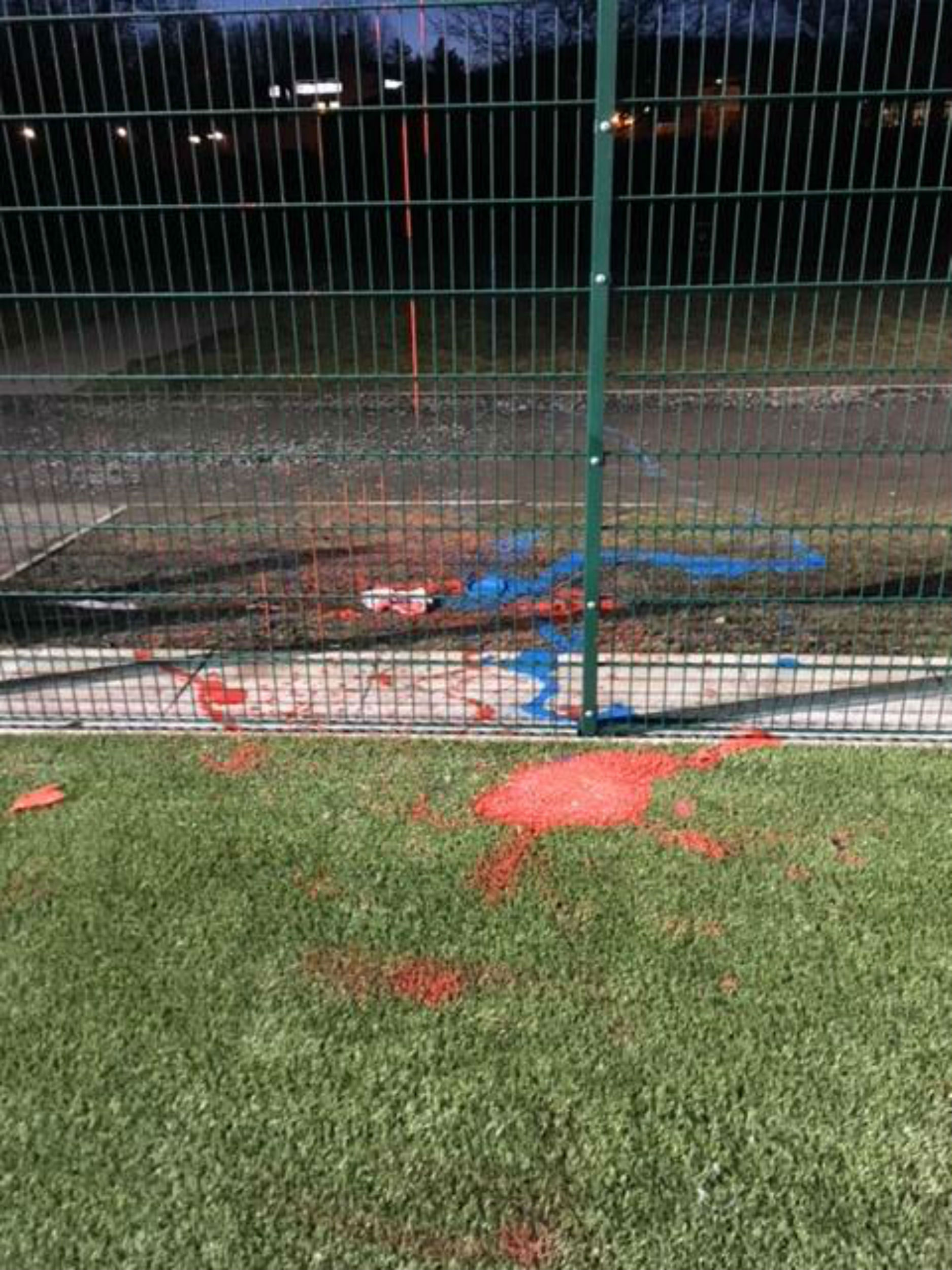 Disgusted by this act of vandalism to their famous son, Cardenden Community Council yesterday posted images on Facebook and wrote: “Mindless vandals have tried their best to ruin our 3G pitch at Wallsgreens.

“This hard fought for pitch took over 30 years to achieve for our community. Cardenden has a proud heritage in the field of football with talented players who played for all of the top teams including achieving caps for Scotland.

“The actions of the vandals who have done this will not break the good community spirit in the Cardenden. They have in fact impacted mainly on the people who the pitch was built for, our young people. Obviously there will have to be some time to have the pitch repaired.

“We hope that the community can pull together and identify who did this and ensure that legal action is taken against the perpetrators.” 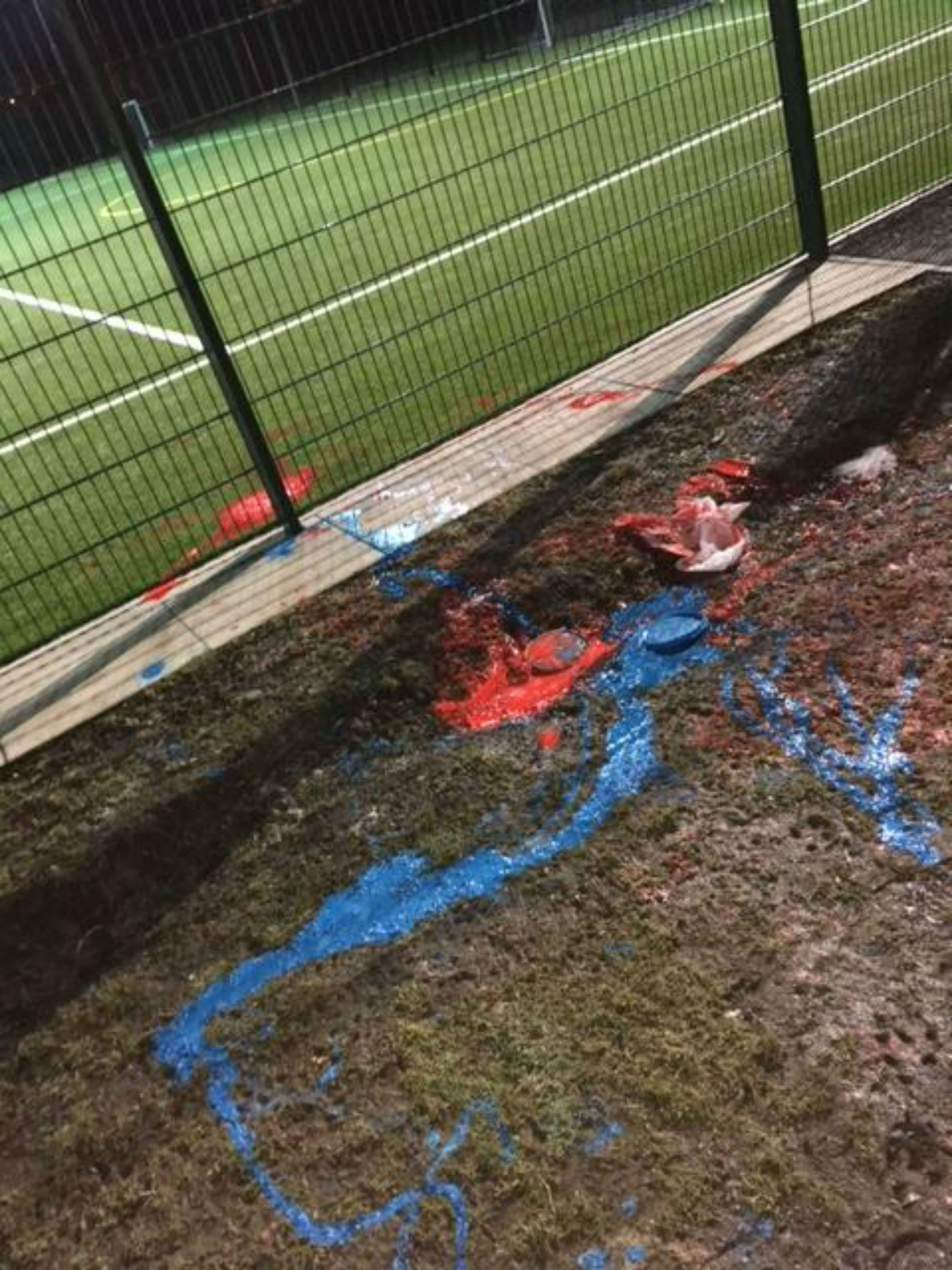 Catherine Page said: “Absolutely terrible what they have done to the pitch. All that money spent so to rags can vandalise the park. Disgraceful.”

Angela Johnstone said: “It was only a matter of time. Wondered how long it would take for some bigot to do this. Sad fact but still very apparent in this day and age.”

Jane McNeil said: “Absolutely disgusted by this and feel sickened at the idea that anyone from the area would be so selfish and irresponsible. Hope that if those responsible brag about their efforts, those around them will do the right thing and report it.” 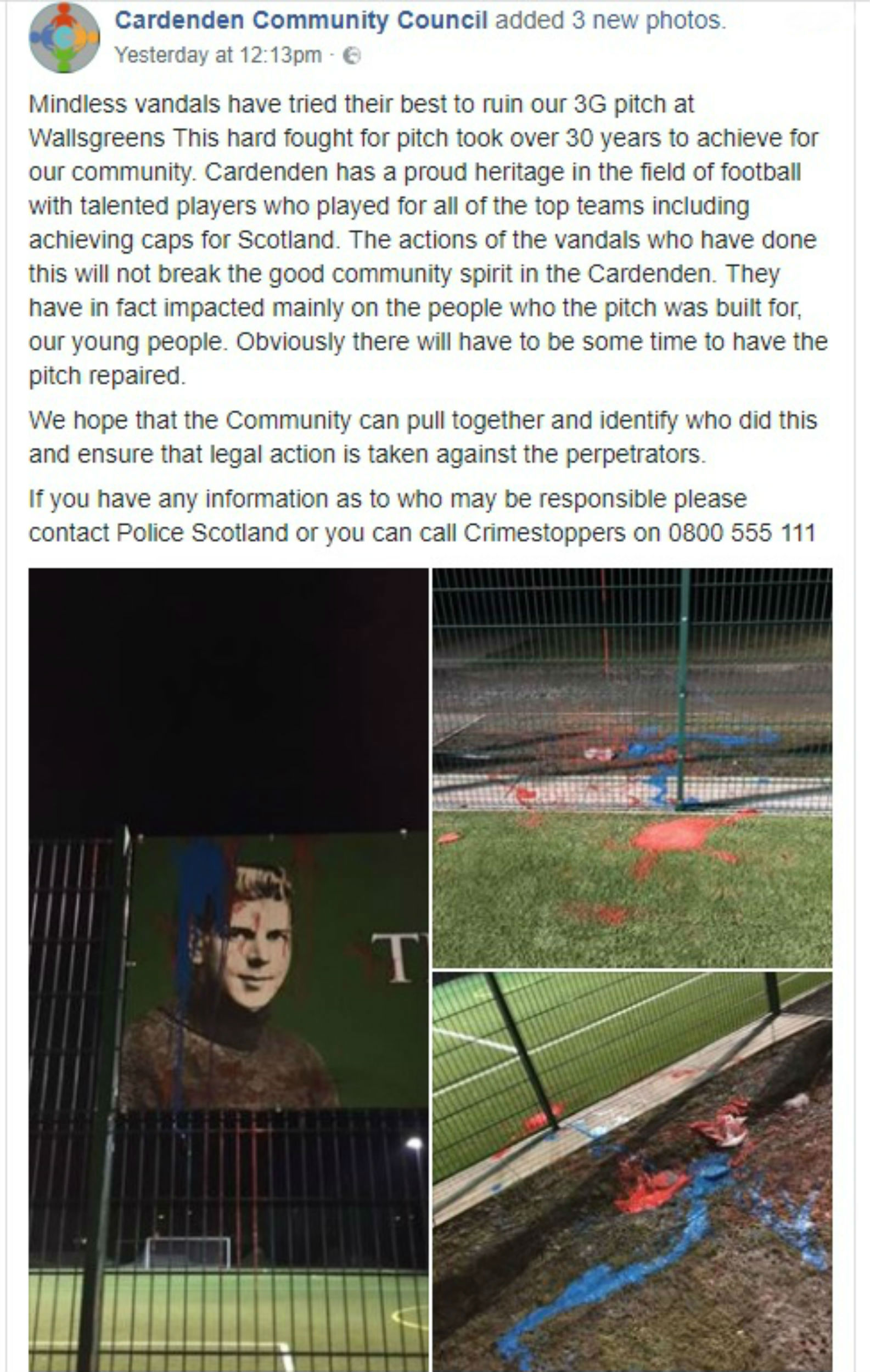 One said: “Sickening vandalism at the John Thomson 3G pitch in Cardenden. Who ever they are they certainly know how to give their a bad name, strange breed this mob.”

A spokeswoman for Police Scotland said:“Police in Fife have received a report of vandalism to a memorial in the Wallsgreen Park area of Cardenden.

“Inquiries into the full circumstances are ongoing and anyone with information is asked to contact Police Scotland via 101, quoting incident number 2216 of 20 March. Alternatively a report can be made to Crimestoppers anonymously on 0800 555 111.”

After the fatal tackle, Thomson was stretchered off the pitch. His head had collided with English’s knee, fracturing his skull and rupturing an artery in his right temple.

He was taken to the Victoria Infirmary in Glasgow where an emergency operation to try to lower the amount of pressure caused by his swelling brain was unsuccessful, and he was pronounced dead.

In 2013, to mark the club’s 125th anniversary, then Celtic manager Neil Lennon and his players visited the grave of Thomson to pay tribute to him at a graveside ceremony.

The small town of Cardenden has historically produced footballers who played at the highest level including Tommy Hutchison who turned out for Manchester City, Willie Johnston, who starred for Rangers and Scotland and Willie Mathieson, also a Gers star.