The 28-year-old, whose existing deal was due to expire next summer, is set to put pen to paper on the fresh terms in the coming days.

Hanlon, who has captained the side in the absence of David Gray, has enjoyed an outstanding personal season in what has been a successful first campaign back in the Premiership for Hibs. 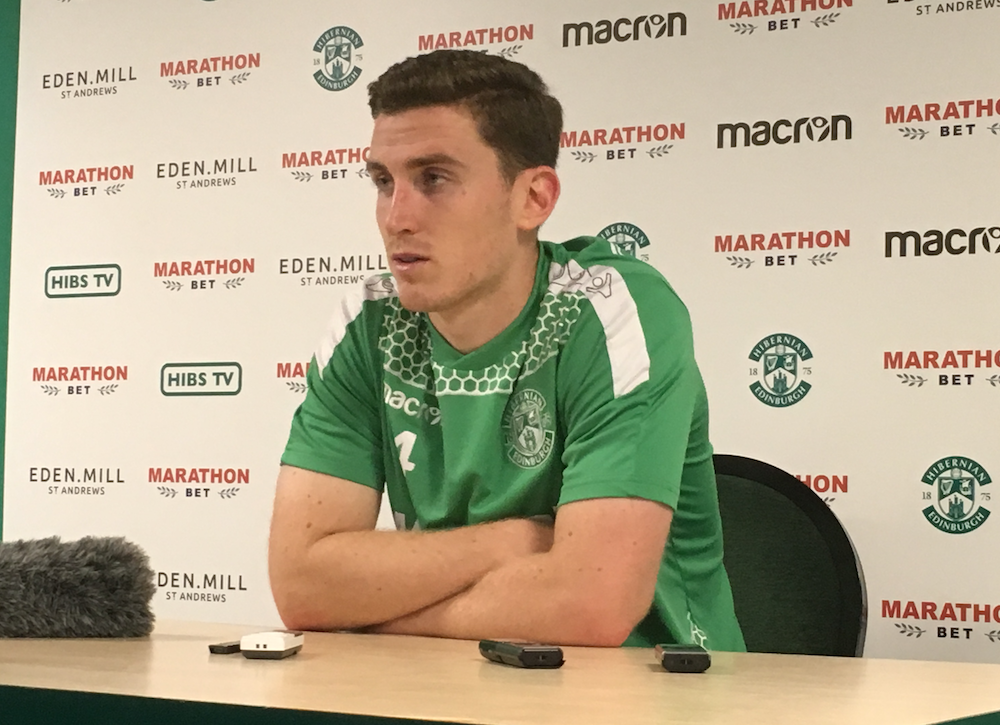 The centre-half was called into Scotland squad for the first time for last November’s friendly defeat to Holland, and the club recently announced that Hanlon would be awarded a testimonial to mark his ten years in the team.

Lennon, whose side will attempt to close the four point gap on second place Aberdeen when they take on Ross County in Dingwall this afternoon, said: “I think Paul is getting better, he has just agreed to extend his contract so we are delighted at that.

“He’s been brilliant and he deserves it. We want him here and he is happy to be here. He’s earned it, he’s captain at the minute and revelling in that role as well.

“For me he’s hardly put a foot wrong this season, he’s played so well. He’s a modern centre-half, he is comfortable on the ball, quick and comfortable bringing the ball forward.”

The impressive displays of Aberdeen defender Scott McKenna and Celtic’s Jack Hendry during last month’s international friendlies against Costa Rica and Hungary appear to have pushed Hanlon further down the international pecking order.

Lennon added: “I don’t think you should right him off, I really don’t.

“There’s been a plethora of left-sided centre-halves at the minute so he’s maybe been a bit unfortunate.

“There’s no argument about McKenna, I think he has been brilliant, outstanding as well, and played very well in the two games.

“But I think Paul is right in there as well, he needs to keep concentrating, playing the way he is and be patient.”

Lennon was also fulsome in his praise of Lewis Stevenson as the left-back prepares to make his 400th appearance for the club at Victoria Park today.

Lennon added: “He is an outstanding player, he has worked under a lot of managers here and it is testament to his professionalism that he is still here, playing as well.

“He is still only 29 so he has a few more years in front of him and I think he will get even better.

“I think he has been absolutely brilliant and so consistent again this season.

“He is one of those players that some people take for granted but that managers don’t, and I can totally understand why he will be making his 400th appearance.

“That is an incredible stat.”

The Nigerian cap admits some of the players had concerns about the departure of two players who had netted a combined 25 goals during the first half of the campaign.

However, on loan Grasshoppers Kamberi took his tally to eight with a hat-trick in the midweek win over Hamilton, while Australian cap Maclaren has three.

Ambrose said: “It was a surprise to me because nobody thought Stokesy or Murray would leave, they had more than 20 goals and they were the top and second top goal scorers.

“Some people might think, ‘what is he trying to do?’

“The players were also a bit confused about letting them go and bringing in two new players who nobody knows and they don’t play in the league before.

“But you cannot challenge him, you have to trust his instincts because he has been there and done it at the top level.

“You need to support him in what he’s trying to do and no-one can question his authority or judgement because if you do, you’ll know what will come.

“It was strange to us but when they came into the team, we can see what they bring so we supported them, we helped them settle down quickly.”