A MAN bumped into his cat nearly a mile from home while out driving – and his cat’s reaction to seeing him made the internet go wild.

Louis the moggy was snapped with his paws on the car as he gazes at his owner with a grin of sorts fixed on his face.

Daniel Sherlock was surprised to come across his pet cat in Brighton, and managed to capture Louis’ delight as he hopped in the car for a ride home.

The year-old Savannah cat, who has a reputation for roaming, disappeared after skipping breakfast but was spotted out and about in Brighton.

Daniel, 34, posted the images on Twitter with the caption: “When you bump into your cat 1/4 mile away from home.” 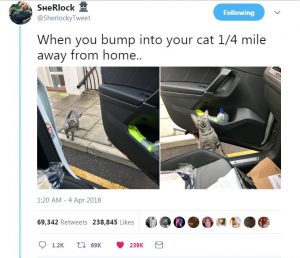 Since they were posted yesterday, the images have received almost 250,000 likes and 70,000 retweets as the cat’s expression captured fans.

Anthony Slattery Moore wrote: “Oh my god, he looks so happy to see you. Look at his little smiley face.”

Coral DeVille wrote: “OMG. He’s so delighted to see you.”

J Rochester added: “Just because he has four legs doesn’t mean he doesn’t have his own thing going on. “

Jozie wrote: “This cat’s like: I can explain…what had happened was…”

Charlotte Haigh wrote: “He has a slightly guilty demeanour, bit like me aged 14 when my mum caught me sneaking off to McDonald’s to look at boys.”

Daniel said: “Yesterday Louis went out of his cat flap early before he’d eaten his breakfast which is unusual because he usually waits for us to get up, and goes out after he eats.

“I jumped in the car, and started my journey then about 1/4 mile away, I turned a corner and saw Louis trotting towards me.

“I pulled over and wound the window down and called him.

“I opened the door and he barely reacted until he realised it was me then when he saw me he popped up and jumped in the car.”

The commercial manager for an airline added: “My phone number is on his collar and I often get text messages from various neighbours to say that Louis is in their house making himself at home.

“I once got a call from the local charity shop on the high street to say Louis was in the shop saying hello to all the customers.. I had to go and collect him and bring him home.”