A WOMAN has been mercilessly trolled after posting a long, emotional message about “bravely exploring the world” – only to reveal she’s off to Magaluf.

The anonymous woman was cut down to size by Jake Perry from Manchester who asked: “Why’s this burd acting like she’s going volunteering in Ugandan villages when she’s actually going f****** Magaluf for three months?”

Jake’s riposte has been liked almost 20,000 times and attracted 4,000 retweets as well as prompting numerous other barbs at the deluded “traveller”. 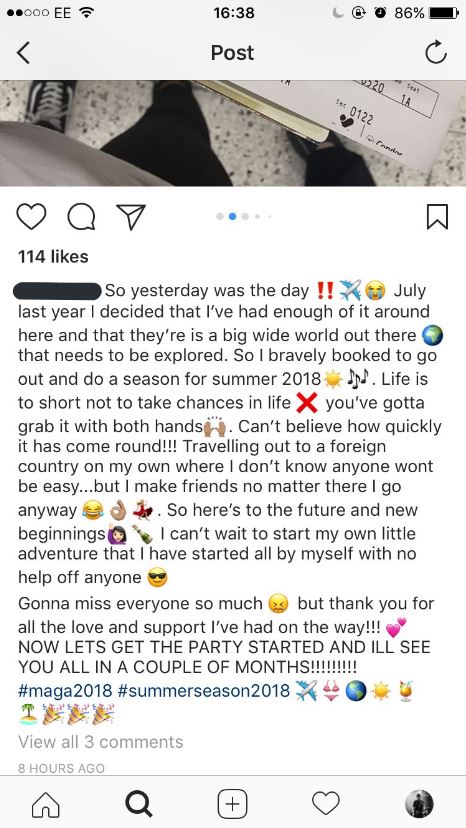 The original poster, whose identity was hidden by Jake, wrote on Instagram: “I decided that I’ve had enough of it around here and there is a big wide world out there that needs to be explored.

“So I bravely booked to go out and do a season for summer 2018. Life is too short not to take chances, you’ve got to grab it with both hands.”

She added: “Travelling out to a foreign country on my own where I don’t know anyone won’t be easy, but I make friends no matter where I go anyway. So here’s to the future and new beginnings, I can’t wait to start my own little adventure that I have started all by myself with no help off anyone.”

After Jake posted the message together with his Uganda jibe, other social media users piled in.

Matt Schofield said: “There’s a big wide world out there, and it’s only a two hour flight.”

Harry Briant said: “Imagine being this emotional and pumped to go Maga for three months.”

Nick Jones joked: “Only thing she’s grabbing with both hands is chlamydia and sunstroke.”

Others stuck up for the woman.

John asked: “Have you ever gone to live abroad on your own for three months?”

Another Twitter user explained: “From experience (doing this myself last summer) travelling to Spain alone, leaving your routine, friends and family at home with no place to live or job lined up yet is extremely daunting.

“Yeah okay it’s not Uganda but what is it with people’s obsession with putting others down? Stop.”

Magaluf, on the island of Majorca, has become a haven for young British holidaymakers looking to party.

After several controversies involving the behaviour of Brits, it was announced that fines for anti-social behaviour or breach of the peace will be increased to €500 this summer.

And an ad for a ‘booze cruise’ was recently banned after being accused of promoting excessive alcohol consumption and linking it to “sexual success.”