A DEPARTMENT store’s £95 gorilla lamp has gone viral after a customer spotted the ape making what seems to be a very rude gesture.

J Farrers tweeted a picture of the orange felt lamp yesterday morning and wrote: “Debenhams seem to be selling a lamp whose base is a gorilla calling you a w*****.”

The snap was taken in their store in Milton Keynes, Bucks, but is available to buy online.

Debenhams describe the lamp – designed by London-based interior designer Abigail Ahern – as “a statement home piece from a distinctive range”.

But Ahern, lauded as the “high priestess of interiors” by Living Etc magazine, could not have imagined the smutty reaction her lamp would receive. 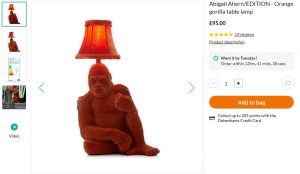 After J Farrers posted his hilarious snap, thousands of Twitter users retweeted the post and scores of people commented.

Barbara Williams suggested to: “Send one to Boris Johnson.”

Many others simply expressed their desire to get hold of one of the lamps.

Julian Burnell wrote: “I NEED THIS.”

Deedeemarz wrote: “That is so terrible. I really want it for my front hall.”

Sam Gallacher wrote: “I bet it is flying off the shelves.”

J Farrers, who does not want to disclose his full name, said today of his find: “Mostly it is either love or hate, but also disbelief and people writing crying or laughing emojis.”