Commuters slam ScotRail for blasting the heating during heatwave

COMMUTERS have blasted ScotRail for turning on the heating when the sun comes out, and one passenger actually fainted in an overcrowded carriage.

A series of tweets have appeared slamming the train company for the conditions at peak times on the cramped ScotRail services over the last few days.

Many were asking if ScotRail could turn off the heating, and saying they were too cramped to get to the staff who were actually on the train to ask them.

One customer who pays £24.70 a day to commute between North Lanarkshire and Edinburgh said she fainted on her morning journey because of the overcrowding and the heat.

She said she is unimpressed with the series of disruptions recently, and the reduced amount of carriages which customers have had to cram into it.

ScotRail tweeted on the day saying that the service had reduced carriages becasue another train in a different location had struck cows the day before.

Another customer tweeted that actually he had to give the woman first aid whilst on the train.

A user called Gar tweeted: “ScotRail Hi, with summer fast approaching, would you please tell train drivers that we don’t need the heating on full blast, especially when we are bearded in like cattle.”

Fern tweeted saying :” ScotRail can you tell me why the heaters need to be blasted on the 7.43 East Kilbride to Glasgow Central train on a dry day when it’s 12 degrees outside?

“Are you trying to see how many people will faint?” 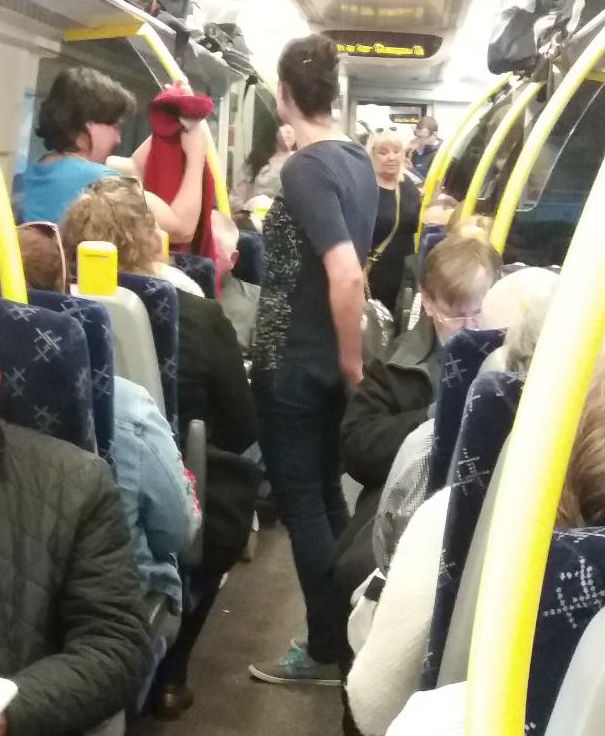 Callum Gorrie wrote: “ScotRail no heating on all winter going to work like Jack from the end of Titanic, now spring is here it’s on full blast – fighting a faint.”

Neil Jones? wrote: “Maybe today might be a good time to turn the heating off in carriage 74310 ScotRail?”

He added a picture of the weather forecast, saying it was 13 degrees in Edinburgh.

A user called KnightswoodBear? tweeted: “How do we know that spring and the warmer temperatures have arrived? – ScotRail have the heating on full blast on the train.”

Other users said they weren’t able to get to train staff due to the overcrowding.

A user called RL tweeted: “ScotRail why do all your trains have the heating on?”

ScotRail replied asking if they had notified staff, to which they replied: “How do I do that on a crowded train?”

Kevin Hamilton tweeted the company saying: “Can you turn the heating off?”

When the customer service team replied suggesting he notify staff, he wrote: “It’s packed so no chance of staff making it to the front.”

On Wednesday one ScotRail customer actually fainted on a carriage. 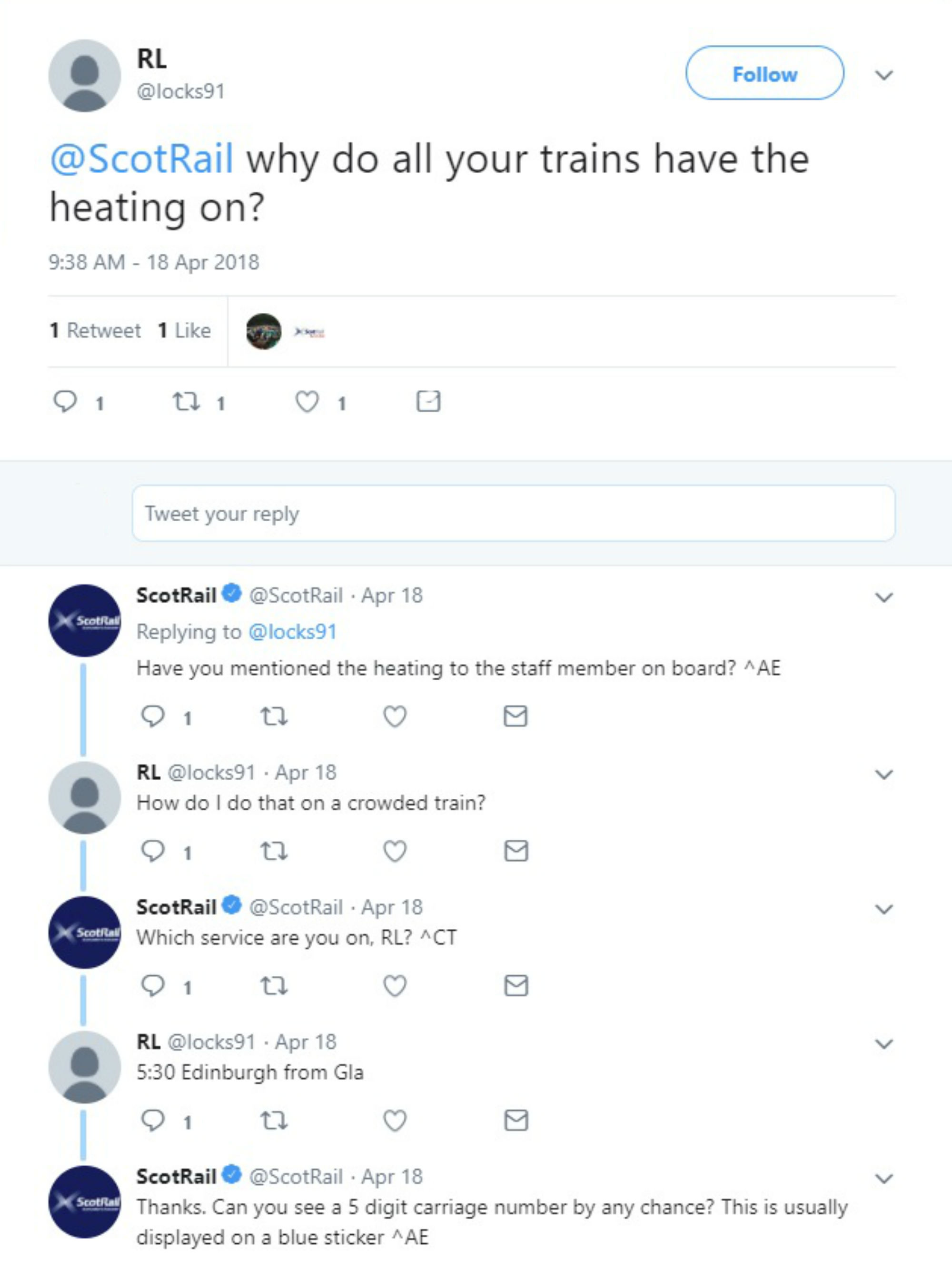 The incident happened on a Glasgow to Edinburgh Train on Wednesday morning, after it picked up the passenger in Croy.

A user called @bazza told Scotrail about the incident on Twitter.

He wrote: “There was a first aider passenger who helped the lady in question. He was excellent. There was no room for any conductor to come through.

“Unfortunately this is due to one of our trains striking cows yesterday, which has impacted the number of units we have available to us today.”

The 25-year-old woman that fainted, who wished to remain anonymous, said:

“It was an extremely busy train and even at Falkirk the Platform staff said to someone at the edge that they were hanging out of the door.

“It just got far too warm and I remember saying to someone that I thought I was going to faint.

“The next thing I knew I was slumped on the floor at the doors with a man, Ed, trying to help me.”

“The train was crushed as it was, but people moved to give me some space. I really needed air when I got to Waverley.”

“It has been ridiculously warm, generally you are struggling for space at peak times anyway and the service on the glasgow to Edinburgh trains have had greatly reduced services over the past few days.

“And the excuses vary from lack of rolling stock to cows being hit.”

After being informed the customer had been in touch with ScotRail about the incident, a ScotRail Alliance spokesperson said: “We are sorry to hear about this woman’s experience, and hope she has recovered.

“We would encourage her to get in touch with us to discuss this further.”