SHOCKING footage shows the moment a “suicidal” cyclist filters through traffic on one of the UK’s busiest motorways – and brazenly overtakes a tanker.

The unidentifed man was filmed wearing a t-shirt and no safety gear as he casually weaves through busy traffic on the M8.

The helmetless cyclist was filmed on dashcam by Mindaugas Dankis, from Glasgow, on Thursday (APR 19) as he entered the city.

The footage captured the man just before junction 17, one of the busiest parts of the motorway leading into the city. 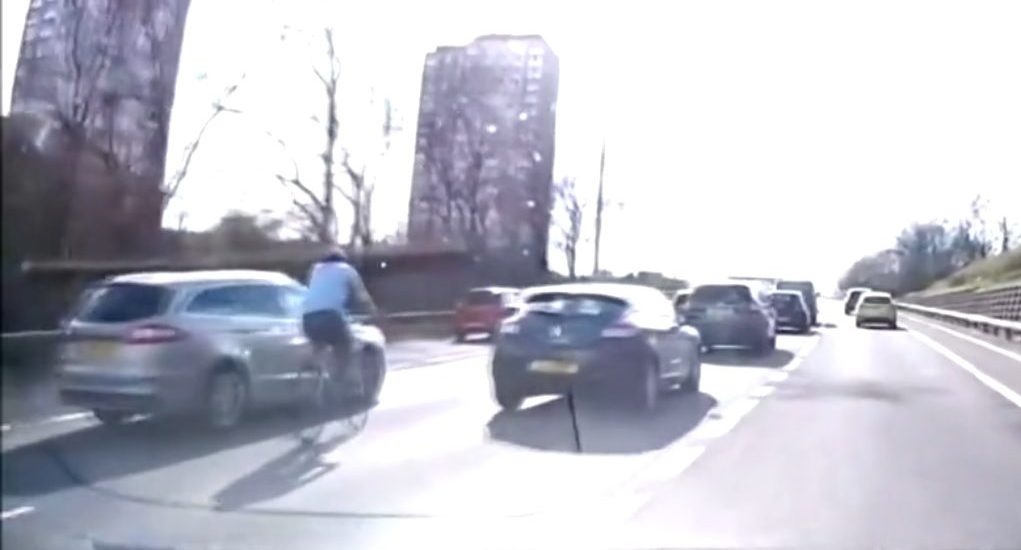 Road safety campaigners have slammed the “suicidal” and “reckless” cyclist for pulling the illegal stunt – which could have been fatal.

Cyclists are forbidden from using motorways, as rule 253 of the Highway Code sets out.

The 10-second clip begins with Mindaugas passing three busy lanes of backed up traffic to his left.

As he continues on the motorway and passes busy traffic suddenly a cyclist can be seen filtering between the two lanes.

The cyclist first appears as he overtakes a large tanker lorry, before thoughtlessly riding on between cars on the packed road, putting not only himself but other drivers at risk.

Surrounded by fast-moving traffic, the unfazed cyclist is seen pedalling past – without a helmet on or any safety gear.

Speaking today, Mindaugas said: “It’s not every day you see someone cycling on M8, but I have to admit he was making better progress than the drivers in cars.”

A spokesman for SWD Media, who obtained the footage, said: “This cyclist clearly doesn’t seem to have any regard for his own safety, this is reckless behaviour and suicidal, especially without the basic protection of a helmet.

“If this was a legitimate mistake you would assume he would seek refuge at the side of the road and call for help, not cycle in lane three, which makes me think he intended to cycle on the motorway.

“Luckily at the time the motorway is congested and traffic is slow moving, the situation would have been much worse had the road been clear and at full speed – a collision would almost certainly be fatal.

“I hope he sees this clip, and will think twice about doing it again as next time he may not be so lucky.”

Last year, shocking footage emerged of a blundering cyclist pedalling down the middle of five lanes on the M8 near Glasgow.

It is believed the man took a ‘wrong turn’. Drivers were forced to swerve to avoid hitting him during busy rush hour traffic.

The cyclist was not wearing safety gear as he crossed the Kingston Bridge in Glasgow – one of the busiest bridges in Europe.