A TEENAGER has hilariously revealed how she managed to get a refund from an online psychic who failed to impress.

Niamh Gargan paid £10 to be told her fortune but was seriously underwhelmed by the result.

The 19-year-old from Glasgow received less-than-startling predictions such as she was “into beauty and hair” and wanted to “settle down with someone”.

The Facebook psychic, “Brodie Mcdougall”, at first declined a refund, insiting her work “takes a lot of energy”.

But after a further series of predictions fell well wide of the mark – including pregnancy – the psychic gave in and returned Niamh’s cash. 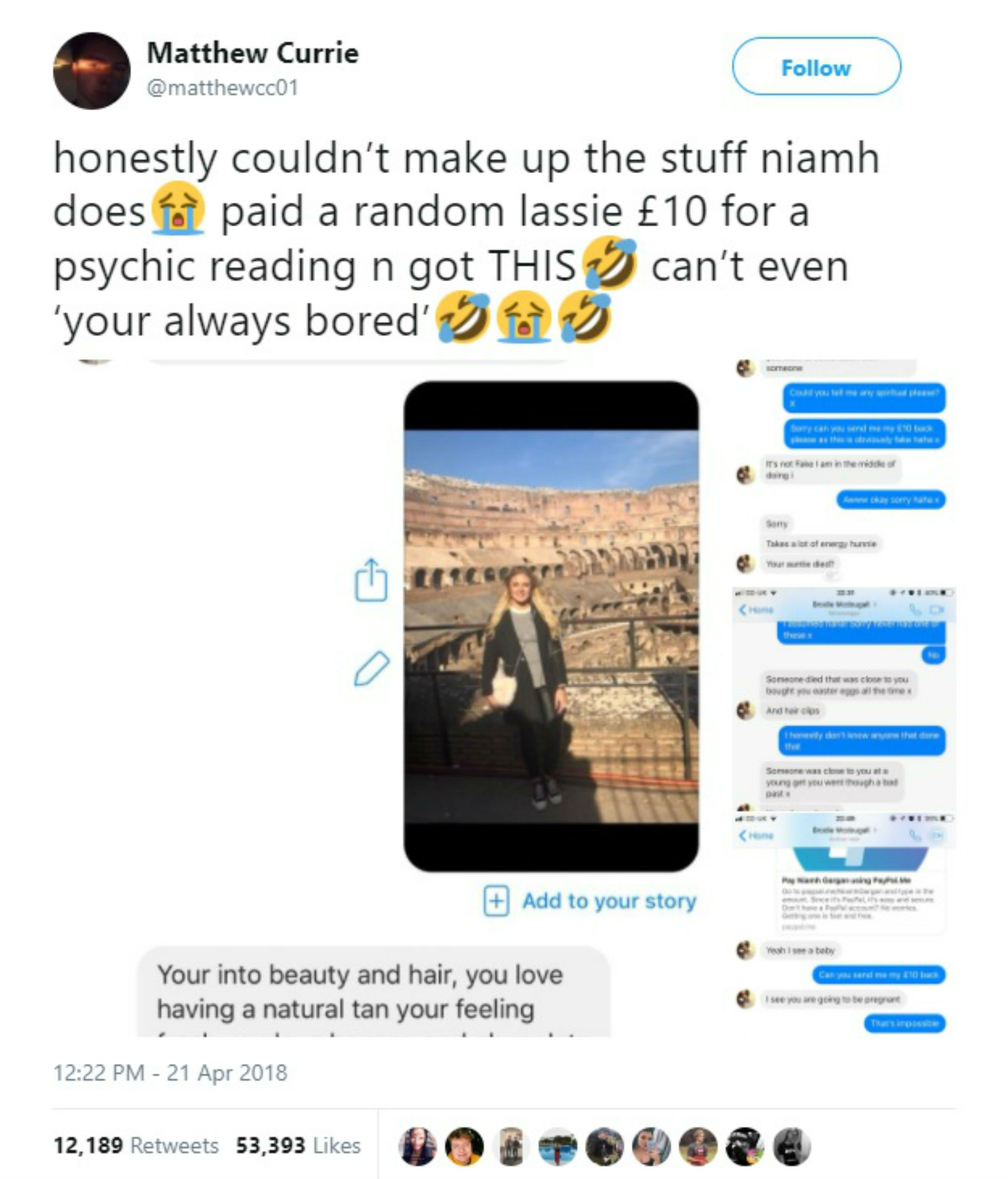 Niamh sent screenshots of her conversation with the ‘clairvoyant’ to her friend, Matthew Currie, who posted them on Twitter with the caption: “Honestly couldn’t make up the stuff Niamh does. Paid a random lassie £10 for a psychic reading and got this.”

The first message from Brodie read: “You’re into beauty and hair, you love having a natural tan, your feeling fresh.”

Brodie went on: “You love banana and chocolate milkshake smoothies. You always have teeth whitening for your teeth.”

She concluded: “You want to settle down with someone.”

Niamh asked if she could be told anything “spiritual” before losing patience and asking for her money back, claiming it was “obviously fake.” 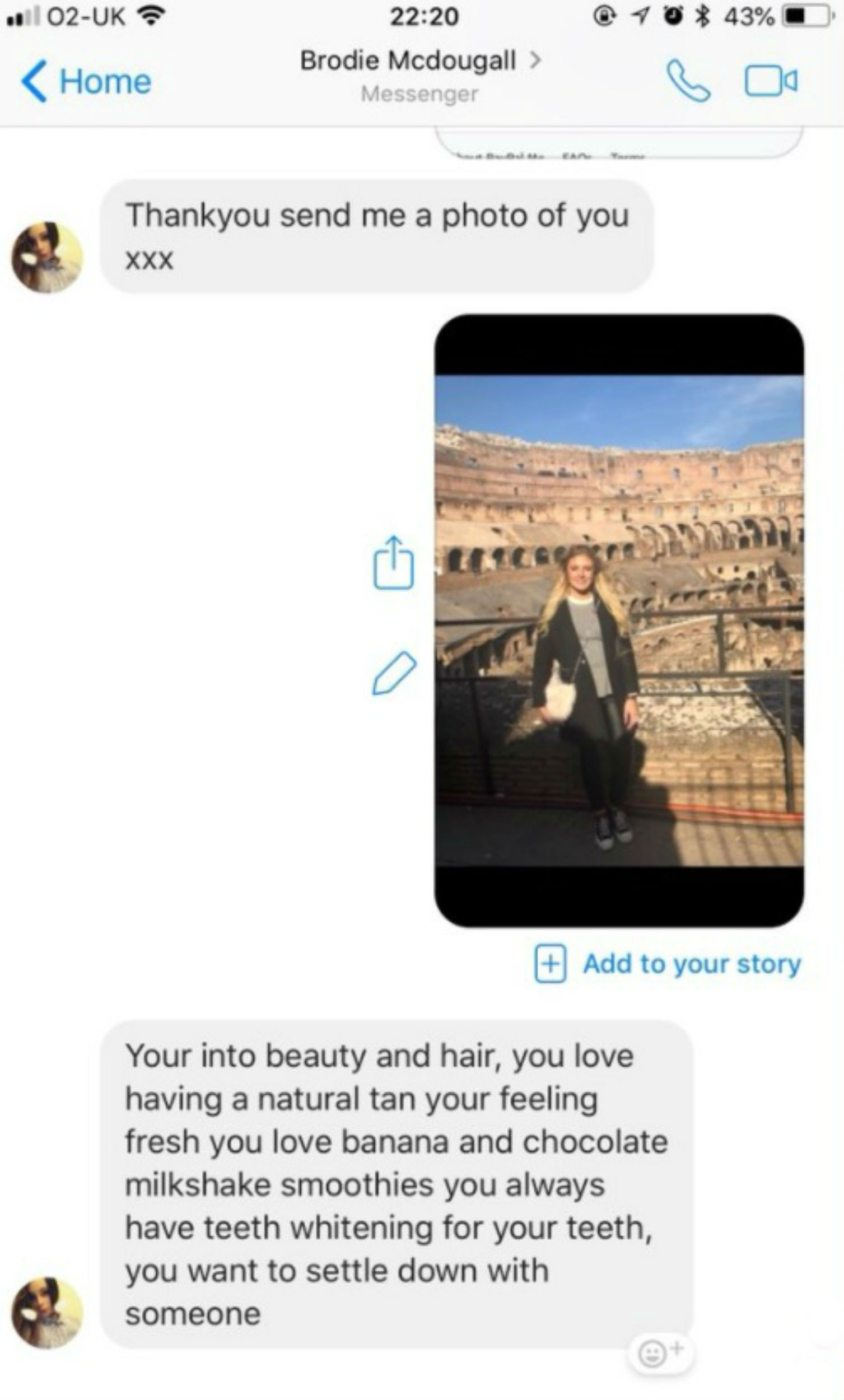 Brodie responded: “It’s not fake I am in the middle of doing it. Takes a lot of energy hunnie.”

Brodie then told Niamh her aunt had died.

Informed that was wide of the mark, she suggested: “Someone died that was close to you, bought you easter eggs all the time, and hair clips.”

Niamh replied: “I honestly don’t know anyone that did that.” 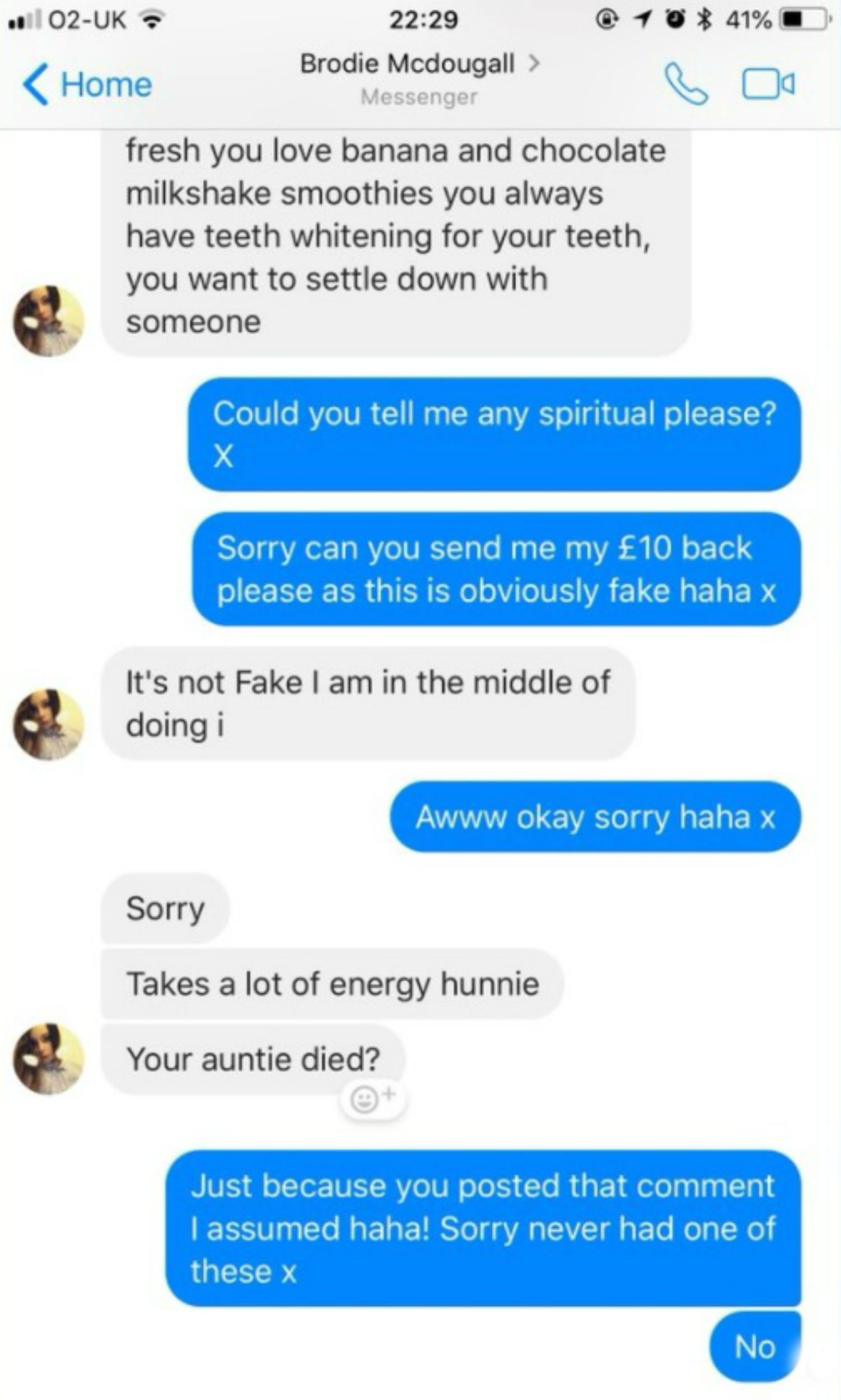 Niamh had finally had enough by this stage and posted a link to her Paypal asking for her money back.

Even then, Brodie persisted: “I see you are going to be pregnant.”

Niamh told Brodie she cannot have children only to be told: “You adopted one.” 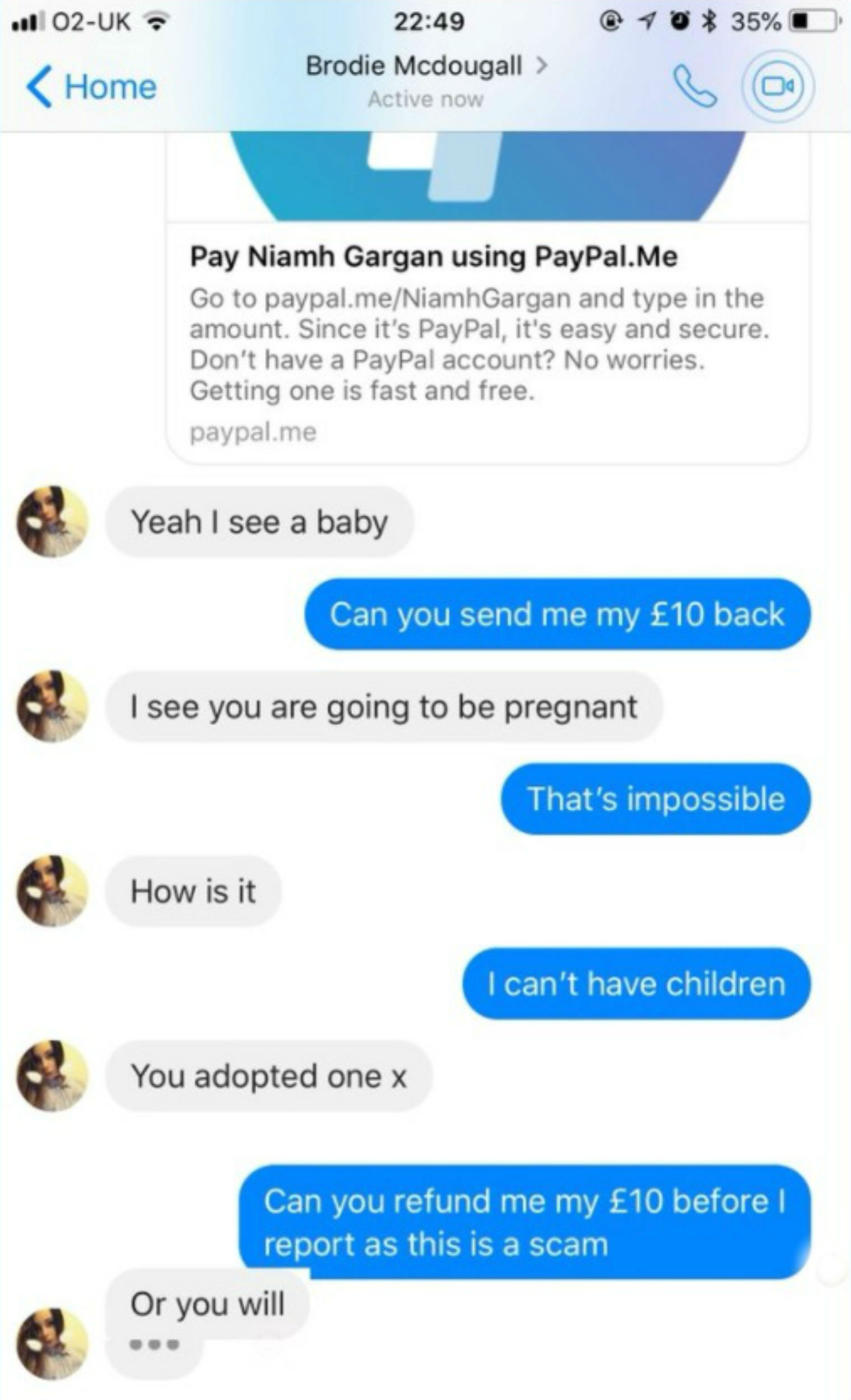 Tom Boyd from Doncaster, South Yorkshire, saw the exchamge online and shared his own experience with Brodie.

After sending her a selfie at a cliffside he was told: “You love fishing, you like to explore, climb mountains, been on a couple of boats.”

He hilariously egged her on by asking: “Unreal, how did you know? You’re so good, anything else?”

The next prediction was “Did your gran die? Heart attack” and Tom again strings her along by saying: “Oh my god yes. How do you know this?”

Neil Hodges said: “Love the desperation” and added a crying with laughter emoji.

Katie Kinloch added: “I can’t stop laughing at this.”

Another user asked: “Seriously though who’s that stupid to pay £10 over your phone for a ‘reading’?”

Niamh today admitted: “I felt like an idiot but I couldn’t stop laughing at my own stupidity and the things she was coming out with. I think she was just saying the first thing that came into her head.”