A SCOTS mum was horrified after she searched on Amazon for toddler toys – and got a steamy novel about lesbian sex.

Lesley Scott typed in “toddlers toys for planes” and got among the results a book called “Lesbian couples who strap and share: The Flight Attendant.”

The X-rated book – featuring a curvaceous and scantily-clad “flight attendant” – was sandwiched between more wholesome offerings such as “Children’s Puzzles on the Move” and “Wooden Cheese Activity”. 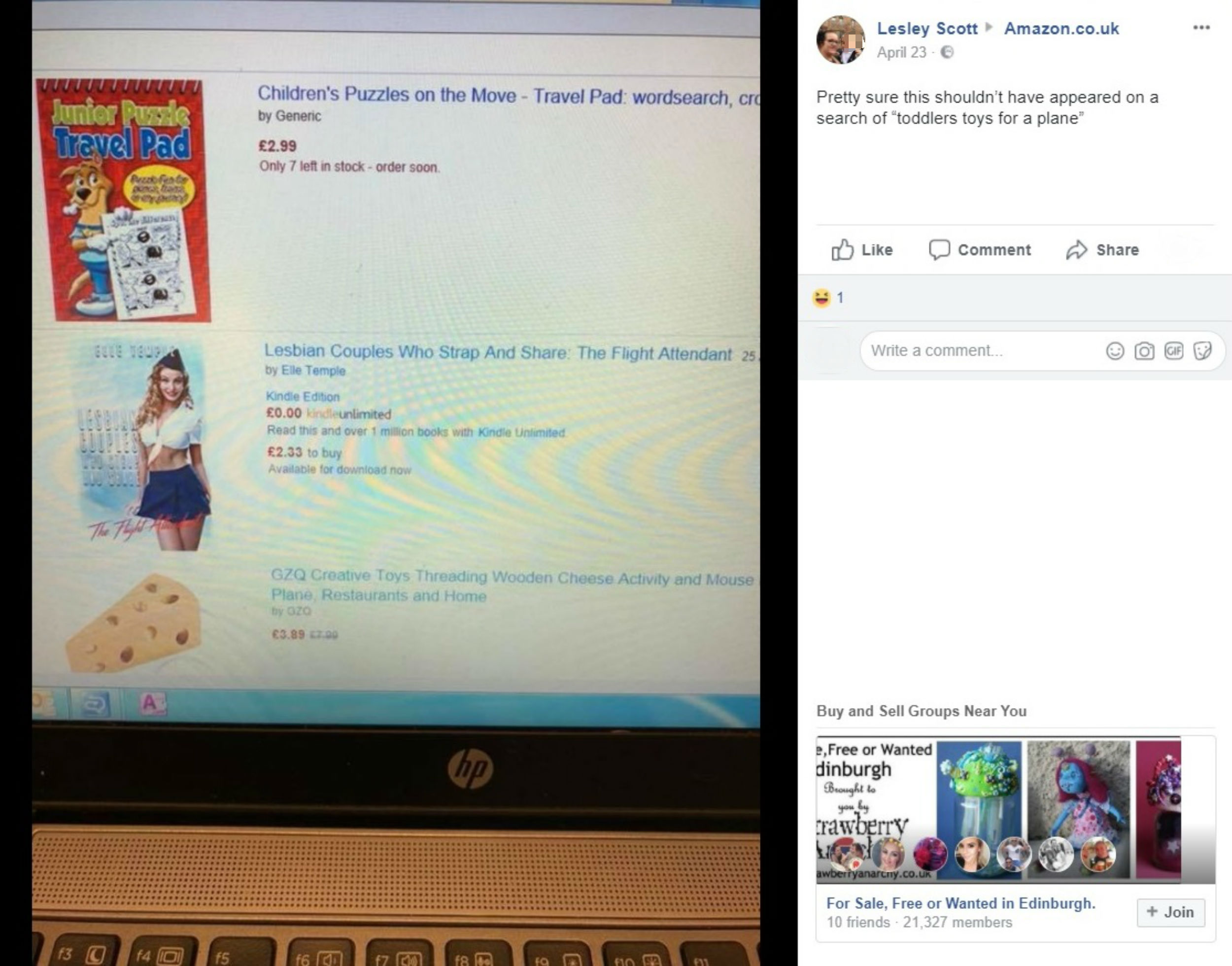 Lesley, from Edinburgh, screengrabbed the page and complained to Amazon: “Pretty sure this shouldn’t have appeared on a search of ‘toddlers toys for a plane’.”

The blurb for the book, by Ellie Temple, and priced at £2.33, states: “There’s a lot of perks that come with being married to a sexy flight attendant, not the least of which are free trips around the world on the weekends. Bonnie and her wife, Melissa, are living the high-flying good life.

“When Melissa seems to be getting a little too friendly with her hot lesbian co-worker, however, Bonnie’s life is thrown into a tailspin as she realizes how much it turns her on to see her wife with another woman.

“This story is 4,100 words of intimate lesbian hotwife and cuckolding sexuality and contains explicit language.”

Speaking today (wed), Lesley said: “I was quite horrified to be honest.

“Thinking about it now it’s quite amusing and toddlers can’t read so it wouldn’t have affected them but first impressions weren’t good!”

Amazon now appear to have acted on the complaint and fixed the raunchy search results after a check of the same keywords today yielded entirely child-friendly results.

Earlier this month, Amazon were under fire after allowing retailers to sell childrens clothes with the slogan “Enjoy Cocaine” emblazoned on the front.

The retail giant was forced to remove the products online and said the sellers responsible could lose their account.

The costumes, described as “Chinese boy fancy dress costume” and priced between £21.86 and £22.02, were being sold with the offensive photograph on Amazon.

The retailer quickly withdrew the products following an online backlash.

University chosen by Amazon to compete in a challenge