AMAZON are investigating as a family were left scared after receiving an “angry, unpleasant and aggressive” note from one of their drivers.

The customer has been left furious after claiming a delivery driver caused his family anxiety by leaving the note at their door.

David Kirk says that his household are now scared to open the door to the company’s couriers after the heated message was left two weeks ago, when a parcel had to be left with a neighbour. 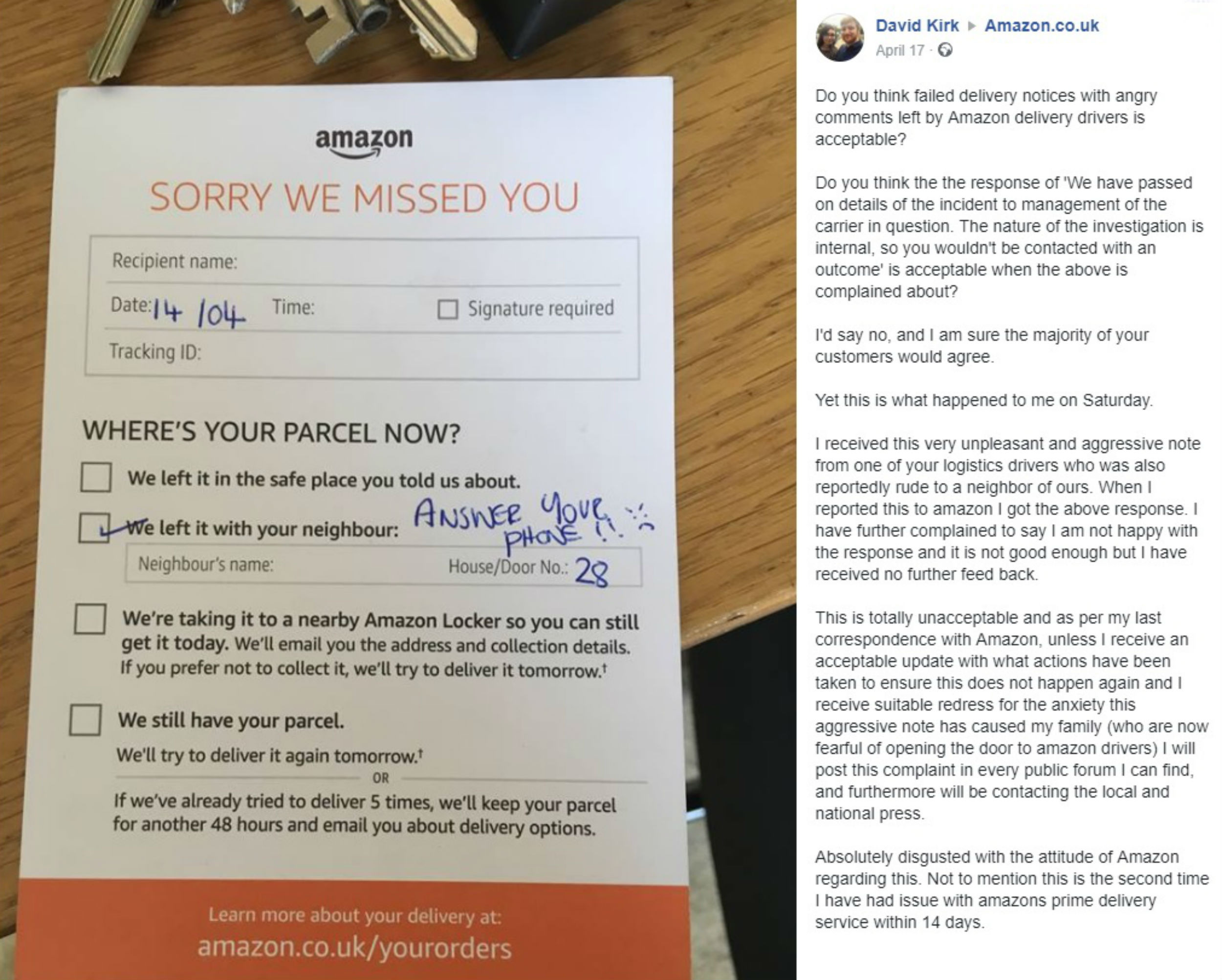 The driver in question was also reportedly rude to the neighbour while at the property and when David, from Manchester, heard about this he decided to complain.

He was disappointed when told that he would not be made aware of what came of an internal investigation, but still wanted to give the global firm time to respond to his complaint accordingly. However, he has been left unsatisfied with how they’ve tried to resolve it.

The card appears to be from Amazon as it has their stamp at the top, and had a tick in the ‘We left it with your neighbour’ box.’

And this was accompanied by the angrily scrawled message in block capitals: “Answer your phone”, and a cross face drawn on.

Posting a photo of the card to Amazon UK’s Facebook page on April 17, David said: “Do you think failed delivery notices with angry comments left by Amazon delivery drivers is acceptable?

“Do you think the the response of ‘We have passed on details of the incident to management of the carrier in question. The nature of the investigation is internal, so you wouldn’t be contacted with an outcome’ is acceptable when the above is complained about?

“I’d say no, and I am sure the majority of your customers would agree. Yet this is what happened to me on Saturday.”

He added: “I received this very unpleasant and aggressive note from one of your logistics drivers who was also reportedly rude to a neighbor of ours. When I reported this to Amazon I got the above response.

“I have further complained to say I am not happy with the response and it is not good enough but I have received no further feedback.

“This is totally unacceptable and as per my last correspondence with Amazon, unless I receive an acceptable update with what actions have been taken to ensure this does not happen again and I receive suitable redress for the anxiety this aggressive note has caused my family (who are now fearful of opening the door to Amazon drivers) I will post this complaint in every public forum I can find.

“Absolutely disgusted with the attitude of Amazon regarding this.”

On Friday, David said: “I wanted to give Amazon further time to remedy the situation, however they have simply ignored my further attempts to resolve the problem.”

The company have now been in touch with him again regarding the issue.

An Amazon spokesman said: “We take this matter seriously and have apologised to the customer. We are investigating with our delivery service provider.”

Last week Amazon customer Ellen Ressel was horrified to find a dead ‘lizard’ in the packaging of her new dressing table.

And the company recently sparked fury by selling kids’ t-shirts emblazoned with the slogan: “Enjoy Cocaine.”